As you may know from my reviews of the first four seasons of Friday Night Lights (found here), this show came into my life less than a month ago. I watched episode after episode, totally hooked on the story and the characters. The best part about devoting most of my free time to this show for the past month (I have a life, it’s just been raining a lot…and there might have been a couple of late nights where I just had to watch one more episode…and then another…and then maybe the last four in the season…) is that I managed to catch up in time for the season five premiere.
This is going to be the last season of Friday Night Lights, which makes me pretty sad. And nervous. I actually have anxiety over where this show will leave my favorite characters. Will Tyra be doing OK in college? Will Tim get out of jail and get his life back? Will Julie and Matt end up together? Will Vince get out of the gang world once and for all?

The first episode picked off several months after the season four finale left off. It’s August, and Julie and Landry are preparing to leave for college. Tim has three months left in jail (tear) before he can get out on good behavior (they better not screw with me on this one), Tami is starting a new job as a guidance counselor at East Dillon High, and the East Dillon Lions are trying to start their second season off on a better note than last year.
I like the formula that Friday Night Lights has been using by setting up changes in a season finale – Coach taking a job at TMU, Tami being pregnant, Eric losing her job, then Tami losing hers – and then starting the following season months later. It gives you a teaser of what’s to come and builds suspense. I was immediately pulled into this episode because I had been so anxious to find out what all the characters had been up to since I’d seen them last. 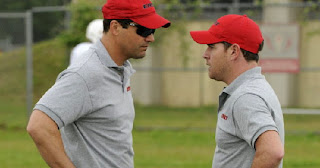 Things weren’t going so well for two of my favorite characters, Tim and Becky. Tim was a shadow of his former self in jail, he’s lost the smirk and spark that defined him. Becky was absolutely miserable staying with her insufferable mom and stepdad, so she took off and asked Billy to put her up – after all, Tim had said they were her family. Mindy, of course, had a bitchface on about the whole thing. Speaking of Billy, he seems to be using the Get Out Of Jail Free card that Tim threw him as a second lease on life. He begged Coach Taylor for a job as is trying to be a better man for his family. Let’s hope it works, because I don’t think I can handle seeing him screw up anymore.

Tami faced a few challenges in her new counseling position at East Dillon, like disgruntled, discouraged teachers, absentee parents and a lac of simple resources like, oh say, a working phone. But Mr. Sourpuss Principal from last year seems to have taken a bit of a liking to Tami and her sunny demeanor, so that’s something. 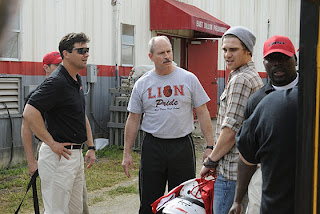 Meanwhile, Coach was trying to improve the team by recruiting a promising basketball player. Can you really not play basketball and football? That seems unfair. Anyway with a little prodding from Luke, Vince and Jess, Hastings Ruckle (I know, right?) signed on. Turns out he’s pretty good, too. The first game the Lions had to face was against last year’s state champions, and Hastings (I’m not sure I can get used to that name) helped the Lions pull out an unexpected win when he told the coach he used to play basketball with one of the opposing team members and knew he could jump higher than the dude. 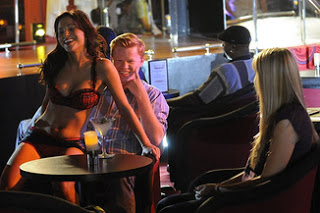 There was a really nice scene with Landry and Julie where she attended his band’s final show (which Landry had titled “The Last Waltz”), they drank beer in front of the Alamo Freeze, and then she took him to the strip club. It was sweet, and things got even sweeter when Julie arrived home and Eric convinced her to play one last game of ping pong with him. Watching Julie drive off for college was bittersweet. I’m going to miss her in the Taylor household, but I’m looking forward to seeing her character defined outside the world of Matt Saracen and Dillon, Texas.

I’m looking forward to what this season has to offer. I want to see Becky channel her inner Tyra Collette (I know she’s got that same spunk) and change the sucky life she’s been handed. I want to see Julie flourish. I want to see Tim get his life back. I want to meet this “Epic” chick that all the teachers hate. What do you want to see? And were you happy with how season five began?

Friday Night Lights: The Beginning of the End
https://haligonia.ca/friday-night-lights-the-beginning-of-the-end-28195/