Last fall we supported a food preservation series with Bayers Westwood Family Resource Centre in Halifax. Participants got a taste of how to can, ferment, and freeze seasonal produce.  At the end of this series we asked participants what they wanted to learn more about. The answer was clear: canning! The centre took this one step further and asked: how can we take these workshops and apply them to a fundraiser for HUGS community garden? So, during four workshops over the winter/spring, we focused on making preserves for sale at the Bayers Westwood International Bizarre (May 2016).

The Process (no pun intended!):

Deciding what to sell: The first of the four workshops focused on deciding what seasonal produce to preserve. We decided to do this using the dotmocracy method. Each person was given the same number of stickers and placed them next to the ideas they liked the most. The results: blueberry jam, pickled beets, and pickled carrots! 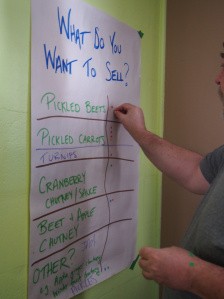 Voting with stickers is fun!

Sourcing bulk produce: You can often purchase bulk produce from local farmers at affordable prices compared to buying in smaller quantities. We ordered veggies from Elmridge farm the week before each workshop. You can pick up your bulk orders wherever they have a market stand ­­­- we picked ours up at the Forum Farmers Market.

Production: Canning workshops took place during the remaining 3 workshops. We made approximately 70 jars. We agreed that if we didn’t sell them all that we could use them for barbecues at the HUGS garden. 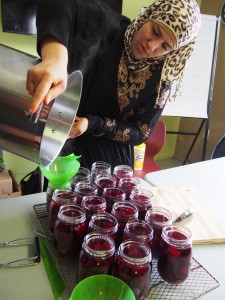 Filling the jars before processing

When people weren’t chopping away, they were keen to engage with other fundraiser details. Some participants had experience organizing fundraisers, or had an entrepreneurial background. These skills emerged during the workshops, and influenced the following to be largely directed by participants:

The Math: We tracked the cost of materials (jars, ingredients, labels) to inform how much to charge per canned product.  This sparked more debate than expected! Questions included: How much would community members be willing to buy these products for? How do these costs compare to products sold at the grocery store? Participants also debated whether or not we should include things like energy costs related to production etc.! And how many samples were we willing to share for free? At the end of the day they wanted to make sure we were at least covering costs. Each jar sold would earn about $2.00 profit toward the HUGS garden.

Branding: Instead of making computer labels, the group decided to make these by hand during the workshops. This offered people a fun role during the workshops, and added to the homemade feel that the group was going for. Consistency was still important to everyone, so one person was designated as the logo lead.

Selling the final products at the International Bizarre. While the jars were processing in the water bath canner, we planned what was needed the day of the International Bizarre.  One participant who organized fundraisers in the past took the lead and became the main contact person for participants. She organized shifts for selling the products, tracked crash flow, and generally took care of everything with support from other participants and Bayers Westwood Family Resource Centre. The results? They sold $200 worth of canned goods! The pickled beets and jam were most popular, and people have been asking participants when they’ll sell more.

Next Steps: Reflect & celebrate! Taking the time to reflect and celebrate is so important. Next week we’ll discuss what was awesome and what we could do different next time. And of course – we’ll decide what the money raised should go toward at the HUGS Garden. It is already clear that people are interested in doing this again in time for the next International Bizarre. We’ll take lessons from this first pilot to adapt, formalize, build ownership, and grow from here.

~Jen Organ is the Community Food Programmer with the Our Food Project of the Ecology Action Centre.

Adventures in Local Food is your source for food news in Nova Scotia, from pickles to policy. It is a project organized by the Ecology Action Centre. Learn more about our program at https://www.ecologyaction.ca/ourfood. Follow us on Twitter @ourfoodproject.