Robert the Bruce, the liberator and eventual king of Scotland, is alleged to have said “if at first you don’t succeed, try try again”. Being a proud Scottish Canadian it would be a disservice to my noble (i.e. mud farmers, poachers, labourers and sheep rapists) ancestors if I didn’t follow his advice. What Robert failed to elaborate on was just how incredibly frustrating repeatedly trying a failed task can be. And how obstinate it makes you. Even worse, the sources of consternation are often fairly petty, which makes the whole dilemma look rather farcical.

In a previous installment of Writers Notebook I talked about the particular nature of my creative process and how I use simple titles or concepts to generate story ideas. Many of which are often quickly discarded due to poor quality or lack of sincere interest. Once in a while however I get attached to particular ideas and like a dog with a bone, I refuse to let them die. Even if I repeatedly fail to make effective use of them. Outer Spiral began its life as a fairly vivid dream I had about four years ago and has since become an immense pet project of mine. In the intervening time I had and forgot many other story ideas, but Outer Spiral endured precisely because it had a title fitting. A definite name which gave it form and that vital bit of substance with which it could anchor itself in the stormy seas of my right brain. Without a memorable title few story ideas survive long term in my crowded memory banks unless they are exceptionally intriguing. This becomes equally important as many of my best ideas have come while either walking, falling asleep or showering and usually in a stream of consciousness style where I build upon previous ideas. I have come up with so much good material while doing one of those three things that I have since forgotten, because I was unable to record them during the midst of my creative session. A title therefore becomes something akin to a mental post-it, allowing me to recall all the concepts and ideas attached to it with ease.

Unfortunately my predilection for title creation sometimes out strips my ability to quickly generate the accompanying material. Or said moment of creation (along with the ensuing infatuation) occur when I have neither the time nor the energy to capitalize on the flood of ideas that follows it. Leaving me only with a rough concept and title that I love and nothing else to back it up. While I usually exorcise these minor brainstorms by writing them down and then ‘deleting’ them from my mental databanks. Occasionally however a title/concept combo of which I have grown especially fond, becomes a nagging intellectual spectre that refuses to go away. No matter how little effort I have actually put into them, they simply hang around upstairs, eating up valuable mental capacity.

Late last winter, on a cold and snowy night, I was at the Sobeys across from Fenwick buying groceries. While perusing the salads and listening to the Blue Rodeo song “Five Days In May” I was immediately struck with an idea out of the blue. For the remainder of my shopping I conceived the rough outline for a story, which at that time I described as “the most bitter love story ever” (I’m not even sure what that exactly means). While the details are undeveloped I will try to sketch you a rough picture. The plot is centered on the occasionally painful and usually acrimonious relationship that develops between a distant, chronically depressed teacher (the unnamed male lead) and a newly graduated rookie journalist (the female lead who is also unnamed but strangely has a clearly defined hometown; Moncton) who has come to the town to work for a new newspaper. Said town, though I haven’t chosen a particular one, is in Nova Scotia’s Annapolis Valley. Whenever I played out the story in my head I always visualized it as similar to Wolfville, Windsor or Kentville (all three of which are in Kings County and in close proximity to my original hometown of Coldbrook) in the dead of winter. Grey, bitterly cold and everything either covered in snow or encrusted with road salt. 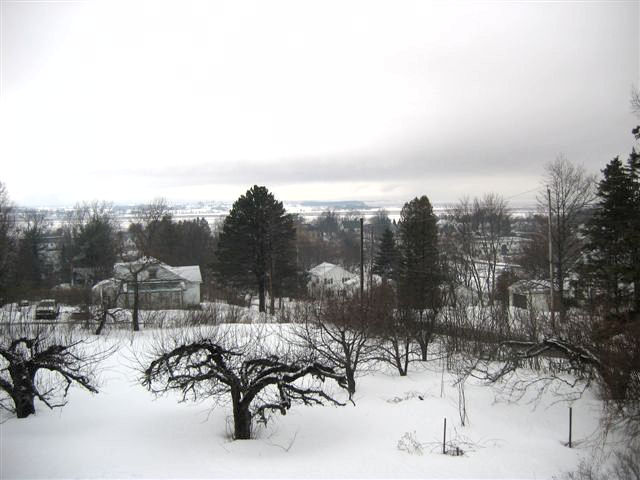 The supporting characters, rather than being blatant Atlantic Canadian stereotypes (looking at you Shipping News) would act like the regular middle and lower class Maritimers who make up the bulk of these communities and who speak with the standard mainland Nova Scotia accents (or a French Canadian one). The time frame I had in mind was roughly the mid-1990s though this is unimportant as the communities in the area haven’t visibly changed that much in the interim. I largely chose that time frame for soundtrack purposes and to avoid the use of cell phones on screen. The intended film could roughly be described as a “Black Dramedy“. Unfortunately, aside from a few plot points, I was unable to get much further than that as I had a paper to write that night. Nonetheless the idea managed doggedly linger on.

Even though this idea was somewhat different from the usual subject matter I dealt with, it stuck around for a couple of reasons. Firstly I liked the visual aesthetic of contrasting the somewhat sombre and unorthodox love story with the grey malaise of Northern Nova Scotia during winter and fall. Even better, the chance to create a realistic portrait of Nova Scotia for all to see would be tremendous. In fact I hoped to include specific Bluenose references in the background; the male lead wearing his University of Kings College tuque (one of my few conceits in the story), people drinking Schooner, Halifax Mooseheads jackets, the omnipresent Tim Hortons, ATV on televisions in the background and obviously the Nova Scotia flag itself. Another reason I like the idea is because the narrative style allows for me to come up with some pretty fantastic dialogue. Easily one of my favourite parts of writing anything. The relative low cost compared to some of my other film ideas means that A) actually getting it into production would be a far more realistic prospect and B) it is far more likely that I would be able or allowed to direct it myself. Not to mention that it is less technically ambitious and therefore far easier for a rookie director to manage. The final and most pressing reason: it now has a title.

While kitting up to go out and purchase a slice of pizza during the middle of a blizzard (in a reality an excuse to walk in the snow as opposed to doing homework) I was suddenly struck by a potential title. Love and Long Underwear. It was perfect. It emphasized the quirky nature of the story while making two simultaneous references; the Canadian winter which features heavily in the setting and another Nova Scotia shot movie Love And Death On Long Island (itself a reference to Death In Venice). Wow just thinking about all this and the title has given me new vigor to press on and actually put pen to paper. Sadly I cannot because, just like before, I have several papers due over the next few or so. Virtually ensuring that my enthusiasm for writing will disappear for at least two weeks or so. But since it is already haunting my mind, it is also interfering with my fucking paper writing. I keep coming up with story ideas instead of examining the French Revolution. I just can’t win. At least this time the title will ensure that I will eventually come back to the concept and hopefully make something out of it!