At the time of writing there are six and a half billion people on the planet. Six and a half billion independent, free thinking minds possessing a massively varying degrees of education, literacy and free time. The volume and breadth of ideas produced each day is so immense that it stands to reason that two people are going to think of roughly the same thing at some time or another. Even if we write off half of these thoughts for being sexual in nature (prove me wrong kids, prove me wrong) the sheer breadth of ponderances is so vast that you are going to have duplication, it’s simply the law of averages. You can’t argue with math ladies and gentlemen, it’s never wrong. Don’t be believe me? Watch Numb3rs. We’ve all been victims of this intellectual convergence several times in our lives, it’s nothing remarkable and it usually has little impact on our daily lives. But every once and a while it manages to muck up the best laid plans of mice and men. A few days ago and with some time to kill I popped on a film from a couple of years ago called Seraphim Falls 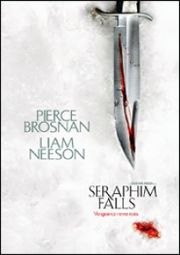 A largely unheralded movie it was decently entertaining, though far from perfect. Occasionally a bit dull it features some pretty strange casting choices and a laughably bad sequence where the two main characters encounter what can only be described as a walking symbolism dispenser. But halfway through the movie these criticisms were the furthest things from my mind. Instead I was silently cursing the bastards who wrote and directed it. Why? Well because Seraphim Falls unleashed a whole boatload of unfortunate convergence on my ass.

You see a while back I came up with an idea for a short(ish) film which was very poorly titled The African Rider. I’ll briefly summarize: the story was set in the aftermath of the Boer War and was centered around a Canadian mounted soldier who finds himself pursued by three Boers, eager to exact revenge for the deaths of their family members during the internment of Boer civilians. Cut off and pursued by expert trackers, the soldier flees helplessly into the Bushveld. Now alone in a hostile unfamiliar wilderness the soldier comes to realize that escape is nearly impossible. During the course of the hunt the soldier (as well as the audience) comes to learn who is attackers are and the reason for their pursuit. The chase in effect becomes a symbolic descent into Hell, payment for the soldier’s actions and his previous attitudes. In the end the soldier is left with two options: accept his fate and by extension the guilt for his alleged crimes or face his pursuers in a desperate fight for salvation. The movie was to be short on dialogue and heavy on surreal visuals. A later revised version had the soldier being chased by survivors of the Red River Rebellion with the action being set in the Alberta badlands. Either way the story was pretty much the same. Unfortunately for me this movie has already been made. Seraphim Falls closely mirrored much of what I wanted to cover and even did it in a similar, albeit far more hamfisted, way. I couldn’t believe it, I had become quite attached to my concept and the idea of making a small brutal Western set in Canada. To see what I essentially viewed as my story on screen especially since it was set in the aftermath of the American Civil War (fucking cliched) steamed my biscuits. But as I thought more and more about it, I realized an important lesson. Not only will I have to be original and creative if I intend to meaningfully succeed, I will have to be timely as well because chances are that this won’t be the last time I’m a victim of intellectual convergence.