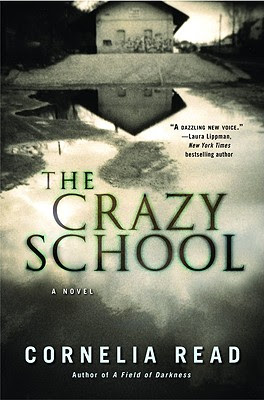 A few months ago, in a (kind of halfhearted) bid to expand my mystery reading repertoire, I discovered a new author by the name of Cornelia Read. I have no recollection of where her name came from; probably Entertainment Weekly. In any case, I picked up her second book, The Crazy School.

It was a Sunday afternoon, I’d had my fill of pancakes and wanted to read for an hour or so before tackling some always fun MLIS homework. Best laid plans and all that… I found Read’s writing so entertaining and the story so compelling that I ignored everything else and spent the afternoon on the couch, racing through the book from start to finish.

The basic premise is that ‘reformed’ debutante, Madeline Dare and her husband have very recently relocated to the Berkshires, where Maddie has taken a job as a teacher at a boarding school for troubled teens. The fact that she has experience with neither teaching nor dysfunctional youth is a bit of a stressor, but she’s so happy to get the heck out of Dodge (well, Syracuse), that she’s willing to suck it up (so long as she can somehow enjoy her school-forbidden addictions to caffeine and nicotine). Of course, this is a mystery novel so Maddie’s uneasy feelings about some members of the teaching staff, the students, and the atmosphere of the school are soon validated by a couple of suspicious deaths that she refuses to believe are suicides, as the official line goes.

The mystery is twisty and turny, but the best part of the book is Madeline, her sense of humour and the way in which she interacts with other characters. She reminds me very much of Janet Evanovich’s star character, Stephanie Plum, the bounty hunter. Both are just a little bit crazy with an utterly charming balance of cautious self assurance (is that an oxymoron?) and talent for making really crappy decisions! Both stumble into situations that may be just a bit beyond their ken, but you root for them because they want so badly to do well and look good doing it.

Both Maddie and Stephanie remind me of Lisa Lutz’s heroine, Isobel Spellman (all of these books are told in first person narrative, and it’s their voices that make the stories so appealing). In the Spellman Trilogy (The Spellman Files, Curse of the Spellmans, Revenge of the Spellmans), Izzy is a Private Investigator in a family of PIs who routinely tail, bug, and blackmail each other … in the most loving way. There are mysteries to be solved, but they’re secondary to the hilarity of Izzy’s life.

I’m not sure I’d want to be friends with Maddie, Stephanie, or Izzy, but life would definitely be way more interesting!