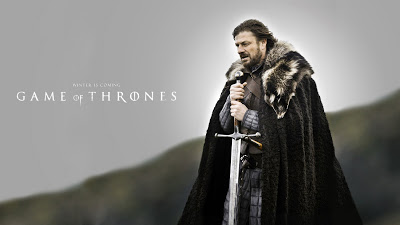 I literally screamed at the television last night when Game of Thrones cut to black. Considering I didn’t truly feel interested in this series until about six episodes in, I’ve become rather invested in what’s happening. When the guards beheaded Ned Stark, I would have given anything to go right into the final episode. What’s going to happen now? Why is there only one episode left in the season? Will I feel any sense of conclusion when it’s over?

Probably not. People are at war, and that war is going to go on for a while. So my next question is, will I tire of it? I hope not, but I also hope this doesn’t turn into season after season of fighting and negotiating, with no sense of progress.

OK now, to check in with my favorite characters.

We got another glimpse at my girl Arya this week, as she appeared just in time to see her father confess to treason. Was Ned always going to confess, or did he do that in an attempt to save Arya from having to witness his death? In any case, it didn’t work – that slimy weasel Joffrey went against the agreement and ordered Ned’s execution anyway, not even having the guts to carry it out himself. Low.

What was most frustrating was that Ned didn’t take the opportunity to publicly call Joffrey’s bloodline into question.

We also watched Jon struggle with his commitment to his family versus his commitment to the Nights Watch, and we saw Catelyn bargain away two of her children (well, Robb accepted the agreement but Arya was most certainly bartered away) to a really creepy dude with gross children. Meanwhile, it looks like Khal is on death’s door and Khaleesi doesn’t have the respect of his people without him.

I’ve read enough spoilers (I can’t help it – I go to Wikipedia to understand the characters better and just keep reading…) to have some sense of what will happen in the finale, but it seems like there’s a lot of ground to cover. Not only am I excited to see what will happen, I’m incredibly intrigued about where the series will go in the second season.