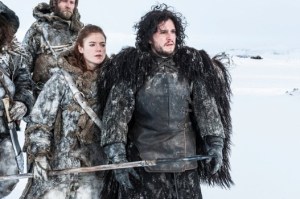 This was a fantastic episode for fans of Jon Snow and Ygritte. I like them too, but darn, I still find Jon Snow incredibly bland. Considering they’re supposed to be the heartthrobs of the show, it’s surprising that I find Jon and Robb so dull.

For me, this episode was a little on the boring side.

Jon and Ygritte had the most action this week (in more than one way, I guess) because they were finally climbing that goddamn wall. The wall was pretty epic, as was Jon saving Ygritte. It was a nice moment when Ygritte looked out onto the other side of the wall, but I have no idea what’s next for these characters. What are they trying to accomplish?

I had to Google what was going on with Arya, Gendry and Melisandre. She came and stole Gendry, which was easy because the Brotherhood Without Banners follow her “Lord of the Light” religion. I wasn’t sure why she wanted Gendry, but it’s because he’s King Robert’s illegitimate son and she wants his blood to make a new baby for Stannis. (Please, correct me if I’m wrong.) And then she… put a spell on Arya? What was that?

I liked watching Tywin and Olenna strategize together. Tywin wants Cersei to marry Loras, but Olenna thinks she’s too old and couldn’t give Loras children. Olenna readily admitted that Loras is “a sword-swallower, through and through”, but Tywin refused to admit any truth to the rumors about Cersei and Jaime – obviously because that could mean Joffrey isn’t actually king. Tywin threatened to make Loras join the Kings Guard instead, which would mean he could never have children and the offspring of Joffrey and Margaery would inherit everything. The scheming! 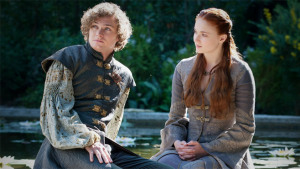 Poor Sansa. She was so happy to be marrying Loras, even though he was more excited about the fringe on her gown than actually marrying her. Even though I feel sorry that she’s being forced to marry Tyrion, and that poor Tyrion had to deliver that news in front of Shea, my favorite moment from the episode was when Tyrion said “This is… awkward.”

It didn’t take much for Robb to reconcile with the Freys. He gave them Harenhaal, which he didn’t want, and his uncle Edmure has to marry one of those gross daughters. Jaime also got off easy – he was allowed to return to King’s Landing as restitution for his hand. Brienne wasn’t so fortunate.

Bran is still wandering around with his troupe, and Theon is being tortured. Those scenes feel almost like torture themselves. (OK, that’s hyperbole, but they’re pretty tedious.) Can anyone elaborate (spoiler-free, of course) on what’s going on there?