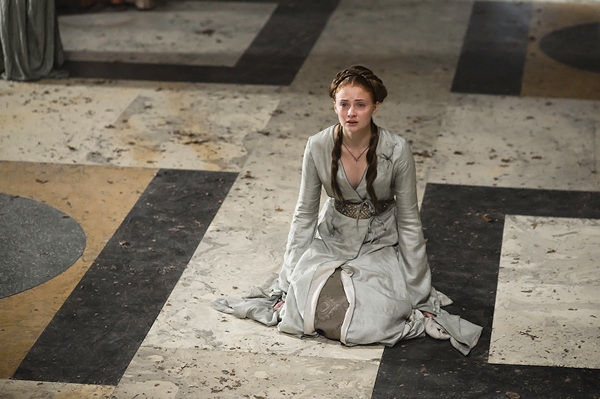 Game of Thrones – The Thirteen and Pregnant

Last night’s episode of Game of Thrones opened with, of all things, a fart joke. Oh man, they’re really helping to support SNL‘s theory that this show is run by a thirteen year old boy, aren’t they? I immediately thought of @AlliTweeds when that happened.

There was a battle, and afterwards Robb Stark argued with a pretty nurse who helped a soldier from the Lannister side. I liked their banter, but I was more concerned about the fact that Robb doesn’t want to sit on the Iron Throne and doesn’t know who should. Um, shouldn’t he have an end game here?

Robb’s war victories on the battlefield weren’t good news for Sansa, because Joffret took them out on her. Thank goodness, Tyrion intervened before it went too far. Joffrey’s cruelty was attributed to boredom, so Tyrion delivered a solution he’s most familiar with – prostitutes. Proving he’s a sick psycho to his core, Joffrey was more interested in watching the two prostitutes hit each other than he was in them actually doing anything to him. And not hitting in a playful, sexual way. It was disgusting. Oh, how I hope Joffrey meets a violent, painful end.

With Jaime imprisoned, apparently Cersei has been bedding her cousin. And he goes along with it because he was instructed by Old Man Lannister to follow all of Cersei’s instructions. Riiiiight. Tyrion confronted him about it, but instead of outing him or banishing him from King’s Landing he turned him into a spy. Tyrion’s a smart cookie, we’ve always known that.

Littlefinger showed up to try and broker a deal, but Renly wasn’t having it.

Catelyn Stark didn’t have kind words for him. The only thing worse than confronting the man who betrayed your husband is having him confess his love for you, right? Happens to me all the time…

Littlefinger tried to make a trade with Catelyn – Sansa and Arya (he lied about having Arya, because he is a weasel) in exchange for Jaime Lannister. Not exactly an even trade, but he was playing to Catelyn’s maternal instincts. He also brought her Ned Stark’s body, as a sign of good faith.

Catelyn tried to get Renly and Stannis to work together against the common enemy of the Lannisters, but they can’t. Stannis considers him the rightful king (which, of course, he sort of is – more than Renly anyway) but Renly has the army, the support, etc.

Daeny was absent from last week’s episode, and in a much better position than we last saw her. One of her men returned with news that The Elders of Quarth would be willing to take them in.

When they arrived, they were greeted by “The Thirteen”, who govern and protect Quarth. (Pronounced Karth, don’t get it wrong!) I loved watching Daeny try and speak with authority, like a true Queen. She was questioned by the leader of The Thirteen, who wanted to see her dragons. She said no, so they refused to help her. Daeny threatened to burn their city down if they weren’t helped. Not a great way to make friends, but she was angry. One of The Thirteen wanted to help and made some sort of oath to vouch for her, and they let Daeny and the Dothraki in.

I didn’t catch where Arya, Gendry and the other prisoners were taken so I had to look it up. It’s Harrenhaal, a place that apparently smells like death. They were being questioned, tortured, and some were killed. Arya is making a list of people she wants to kill, because she is bad ass and is probably reincarnated as Katniss Everdeen in a future life.

They were being asked about The Brotherhood, whatever that is. Do you guys know? Later, Tywin Lannister demanded that the prisoners be turned into laborers instead of killed. He’s smart, because he immediately identified Arya as a girl – and he gave her a job as his new cup bearer. However, Arya working for Tywin Lannister is very dangerous, should he realize she’s a Stark.

Um, ew? And what the hell? The birth scene that closed the episode was disgusting. Melisandre has given birth to some kind of smoke monster. Book readers, feel free to take it from here – can you explain that without dishing out too many spoilers?