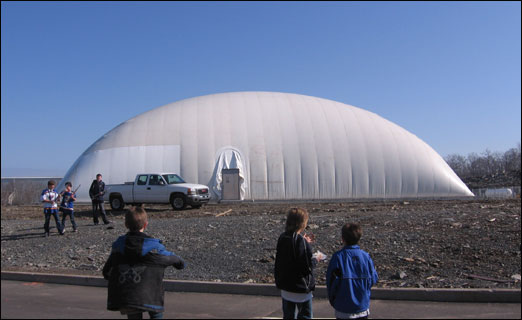 The Gary Martin Dome Arena, located off of Damascus Road.

The Honourable Peter MacKay, Minister of National Defence and Minister for the Atlantic Gateway, today announced an investment of $2 million by the Government of Canada in four Nova Scotia infrastructure projects.

“Canada’s Economic Action Plan is making a real difference for Nova Scotia by working with our partners to build strong, stable communities for the future,” said Minister MacKay. “Under the leadership of Prime Minister Stephen Harper, our Government is stimulating the economy and creating jobs.”

Today’s investment, through the Atlantic Canada Opportunities Agency (ACOA), includes one project being funded under the Community Adjustment Fund (CAF) and three projects supported by the Recreational Infrastructure Canada (RInC) program. The total federal investment in these projects is valued at$2,031,143.

The projects receiving funding include:

Town of Trenton―This project represents a revitalization of downtown Trenton including the construction of a plaza at each end of Main Street, site improvements, streetscape enhancements, improved street lighting and parking, and outdoor dining areas. The CAF contribution is $655,633.

Trenton Arena―The Town of Trenton is replacing and upgrading equipment at the Trenton Arena, including the installation of a new refrigeration system. The RInC contribution is $238,508.

Glooscap Curling Club, Kentville―As a result of deteriorating conditions, the curling club will remove the existing floor and replace it with a new on-grade cement ice floor. The RInC Contribution is $137,002.

Canada’s Economic Action Plan provides funding over two years for the RInC program and is being used to support the upgrading and renewal of recreational facilities in communities, as well as to encourage increased participation in physical activity and community building.

The CAF program is delivering timely and targeted stimulus to help communities and industries meet the challenges arising from the impact of the global economic slowdown.