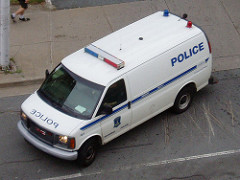 Police are looking for two individuals and arrested two in three separate incidents overnight.
Gas Station Robbery
A lone male wearing a ski mask entered the Petro Canada Station, 231 Herring Cove Rd, at approximately 9pm . He then demanded cash from the clerk and made a motion to an object inside his jacket.  The clerk handed over a quantity of cash after which the suspect fled on foot towards Layton Rd. No weapon was seen and no injuries occurred during the incident. K9 conducted a track recovering some discarded clothing worn by the suspect nearby.
Suspect described as a white male, slim build, 5’6”-5’9” tall, 18-25 years of age, wearing a blue ski coat, jeans and black ski mask.
Residential B&E
A resident living in the  2500 block of Oxford St Halifax, located one male and one female youth inside his shed after they had kicked in the shed door. Both suspects left the area only to be located and arrested nearby by HRP members. Both charged with break & enter, trespass by night and released to attend court at a later date. Male also charged with breach of a court order.
Cars Damaged
A resident of an apartment building in the 1400 block of Martello St. Halifax, was informed by another resident that a suspicious male was seen lurking around vehicles in the underground parking area. The residents located the suspect acting suspiciously around a vehicle parked in the underground parking lot. The suspect fled towards the exit followed by the residents. The suspect turned and pulled a knife threatening the residents. The suspect then fled the area. Several vehicles were later found  to be damaged.
Suspect: White male, 6’0” tall, medium build, scruffy face, wearing a blue wind breaker style jacket with a red hoodie,  blue jeans and sneakers. Matter is still under investigation.
Source: Release