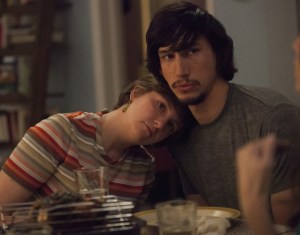 HBO’s Girls returned last night with back-to-back episodes, and I couldn’t have been happier. I’ve been looking forward to this show coming back, and all day at work I was excited to go home and tune in via DVR.

As always, Girls was in the news before it aired – this time, because some jackass critic at the TCAs asked Lena Dunham a question about her “unnecessary nudity” (paraphrasing) or something ridiculous. Compared to other HBO shows, Girls actually doesn’t have THAT much nudity, and there were a lot of reasons to hate that question being asked.

I’m not troubled by seeing a normal human body naked, especially when in a normal context like sex, bathing, and generally living life. I’m not bothered by Hannah Horvath’s nudity, just like I’m not bothered by her frequent unlikability – there are SO MANY male leads on TV shows that can lean more towards the unlikable than likable, yet when a twenty-something female character is obnoxious, it’s making a statement about ALL twenty-something women. So even though I don’t always like Hannah, or Jessa or Marnie or Shosh (who are we kidding I freaking love Shoshanna), I like watching their lives and I’m glad this show is back.

A lot always happens in between seasons of Girls. Hannah and Adam live together, Shoshanna’s going through a serious party girl phase before graduating, Marnie is trying to pick up the pieces after getting abruptly dumped by Charlie (and for the last time, as he’s left the show) and Jessa is raising hell in rehab.

The two returning episodes were, I thought, very funny and really strongly written. Not only did I laugh out loud at several things that Shosh said (“I think I’ll never be bored as long as there’s Halloween.”), but also Hannah and – gasp! – Jessa. I mean, Hannah laying in the woods listening to This American Life? It was funny. It just was.

Girls continues to be a show with a super unique voice and a very specific tone that does not work for everyone. But for those of us who love the show, these were two really great episodes.

Girls – “Females Only” and “Truth or Dare”
https://haligonia.ca/girls-females-only-and-truth-or-dare-87804/