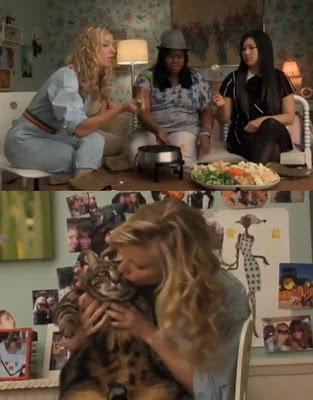 How do I get a gig on Fondue for Two? That is my new goal in life – just hangin’ out with Brittany S. Pierce and Lord Tubbington on her ultra-charming and adorable internet talk show.

The episode, aptly titled “Rumours”, was a good one I think. It featured lots of great songs from the Fleetwood Mac album it was named after, and the gossip-related storylines perfectly suited the theme and the show itself.

It all began on the talk show. Brittany told her two guests, Mercedes and Tina, that Santana plays for the other team. Poor Brittany meant that Santana used to be on the Cheerios, and now she’s in glee club. Obviously, that’s not how it was taken. And thanks to Sue Sylvester, all sorts of rumours were flying around McKinley High – she got the school newspaper, the Muckrakers, back up and running with the singular goal of taking down the glee club.

Meanwhile, Rachel asked Sam to prom and got turned down. You had to feel bad for her in that moment, even if the scene was meant to set up a more important storyline for Sam. As odd a pairing as Rachel and Sam may seem, I understood why she asked him. Rachel will want a prom date, and her best bet is to go with someone from glee club. Sam’s the only unattached guy left. Finn has Quinn, Mike has Tina, Artie has (had, sadface…) Brittany, Puck has Lauren. Even Kurt has Blaine, so they can’t go as friends. So who else could poor Rachel ask other than Sam? Jacob Ben Israel?

Stupid is as Stupid does

As awesome as Sue’s David Bowie and Ann Coulter costumes were, I’d like to see Sue get to do something a little more substantial than this. That said, I liked the drama the Muckraker dredged up among the glee kids. It made Finn question Quinn’s loyalty, which was something that needed to happen even without rumours flying. After all, Finn hooked up with Quinn while she was still with Sam, and he should be overcome with a mixture of guilt and suspicion. The rumour about Santana didn’t just make her life miserable, but Brittany’s as well. 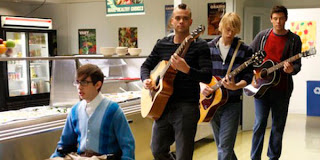 I have to say, I was a bit surprised at how cruelly Artie responded to the rumour. But he is nerdy, wheelchair bound, and dating someone much hotter than him. That can mess with a teenage boy’s self-esteem. Still, I thought maybe he was already vaguely aware of Brittany and Santana’s relationship and just didn’t care about it. Wouldn’t a teenage boy be excited about that? I mean…come on. When Artie and Tina were a thing, I was often annoyed at how chauvinistically he treated her. With Brittany, he seemed softer and happier. I was sad to see that go out the window, and even sadder to see Brittany burst into tears when he called her stupid. Come on, Artie! Why couldn’t you have just called her naive?!

Since things were over with Artie, Brittany was ready for things to start with Santana. The problem was, Santana didn’t want to go public. Poor Brittany, she just wanted to

The Rhode to Broadway 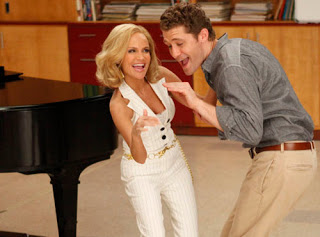 Another rumour floating around the school? That Will was going to abandon New Directions in order to pursue his own dreams on Broadway, thanks to the return of April Rhodes. April was writing a Broadway musical based on her life, and wanted Will to take part. Terri Schuester was also somehow involved, because the honey badger wanted the old apartment back. The most important voice telling Will to follow his dreams, though, had nothing to do with Sue’s plan to take down glee club – it was Emma’s.

Emma has been taking her medication for a few weeks now, and is doing much better. She only had to rinse her grapes under cold water for half an hour before eating them which, frankly, sounds perfectly healthy to me. And now that she’s not trapped under a rock of anxiety, she was encouraging Will to follow his own dreams. I liked that someone gave Will a real reason to want to pursue Broadway. That if he thought about leaving, it wouldn’t be because he was being selfish or being pushed into it by Sue and her goonies. It would be because it’s what he’s always wanted, and he deserves to go for it. When Emma was watching Will rehearse with April, I was worried she’d respond with jealousy. That would have been cheesy and kind of out of character, so I’m glad she reacted with encouragement instead.

Of course, with Will on Broadway we wouldn’t have a TV show, so he couldn’t go for it. And he’s happy in Lima, Ohio. He has a glee club on its way to winning Nationals and he has a delightful redhead to win back. It was great to see Kristen Chenoweth back, though. She and Will always have great charisma, and they really added an extra oomph to the episode.

Of course, Finn’s childish antics seemed even worse when the truth was revealed. Sam was living at the motel with his parents and two younger siblings. His family had moved to Ohio because his dad got a good job, but thanks to the recession he got laid off and they lost everything. Kurt knew because Sam had delivered pizza to Dalton Academy (though, since when does a teenage boy with a job mean that his family is homeless?) and Quinn knew because she and Sam go to the same church. They were both at the motel to help, with old clothes and babysitting services.

Luckily, Rachel and Finn reacted to the news exactly the way they should have. Sad about their friend’s situation, and embarrassed by their own shameful actions. So they did what they could to help – Finn brought over some clothes that weren’t bedazzled riding pants, and Rachel implored Sam not to quit glee club by getting everyone together to buy back the guitar he’d hawked. On the one hand, Rachel’s actions did seem a tad selfish – she didn’t want Sam to quit glee club because she wants to win Nationals. And they perhaps should have bought food instead of a guitar. But on the other hand, music has the ability to get people through tough times. Sam could benefit from the support system of glee club and odds are the guitar meant a lot to him. So I’m giving Rachel the benefit of the doubt on this one and saying that her and Finn’s visit with Sam was a sweet, touching scene that may have gotten me a little misty-eyed. 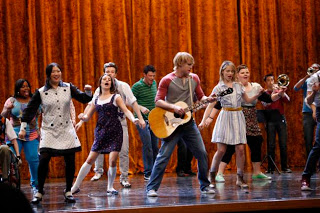 What was great about this episode was that it covered a lot of ground without feeling too cluttered or preachy. The way Sam’s situation was handled was fantastic, and Chord Overstreet acted the hell out of his scenes. I love getting to see people other than Kurt get emotionally heavy material, and Glee has been doing a good job of spreading the love lately. I’m also happy with the way Will and Emma’s relationship is progressing – I was worried her marriage to Karl would make any reunion with Will seem too fast or contrived, but it feels very natural.

With only three episodes left, I’m really excited to see how the season wraps up. We still have prom to deal with, as well as an episode titled “Funeral” (I’m worried!) and a trip to New York.What did you think of “Rumours”? What were your favorite musical performances?

Performances
I didn’t mention any of the songs in the review because they didn’t seem to standout in this episode. Not to say that they weren’t good – they were. But this week the plot was front and center, rather than the songs. Here’s what I thought of the performances: