Tuesday night’s episode of Glee was…not great. It pains me to say this because I’m a pretty diehard Glee supporter. Really, I’m not one of those people who watch it every week, writing snarkily negative tweets, blogs or reviews. In short, I am not the kind of person Ryan Murphy was so blatantly criticizing this week. (Honestly, that scene where Gwyneth talked to the kids about hating on message boards and such really had my cringing.) But this episode, it just didn’t work for me.

It started off strong, with a hilarious bit about Mike, Tina, Artie and Brittany winning a Brainiacs competition. How’d the win? Brittany’s plethora of knowledge when it comes to cat diseases and the final category of “White Rappers” playing right to Artie’s strengths. 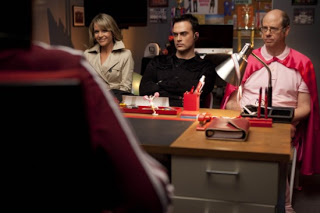 But then it all went downhill. In an attempt to raise money for Regionals (or is it Nationals now?) and the Brainiacs’ trip to finals in Detroit, Will decided to take Holly’s advice and hold a benefit. Or a “Night of Neglect” as she put it, which didn’t sound particularly promising. Meanwhile, Sue had assembled a crack team of saboteurs to try and take down Will and New Directions once and for all – the former McKinley High glee club coach Sandy, the handsome coach from Vocal Adrenaline known only as “Sergent Handsome” and Terri Schuester. This bit started off funny – I loved how no one could remember if they were the “League of Doom” or the “Legion of Evil” or what – but it couldn’t make up for the rest of the episode. I am interested to see what evil task Sue will assign Terri. 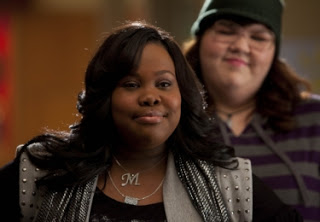 One of the worst storylines in the episode was, unfortunately, one of the most prominent. Mercedes’s brief spin as a diva. Lauren convinced her that in order to get respect, she needed to make demands rather than just remand respect itself. Mercedes was a bitch for a while, she eventually came around, and well all learned a valuable lesson. Diva just wasn’t a good or believable color on Mercedes, and not even a tender scene where Mercedes asked why she wasn’t as big a star as Rachel could save the plot.

We got a little bit of Sunshine back in our lives this week – Corozon, that is. Charice was back as the adorably hatted rival, but she came in peace. She was going to perform at the benefit and bring all 600 of her Twitter followers! And when she auditioned, she absolutely killed her Celine Dion song. Holy crap, that girl can sing. Her plotline didn’t go too far, though, since Srgt. Handsome stopped her from helping out with the benefit.

The best, or at least the most promising part of the episode, was the exit of Holly Holliday and the sweet moment Will shared with Emma when he learned of her impending marriage annulment. We knew Will and Holly could never last because Gwyneth Paltrow is a guest star, so she was really only one obstacle in the way of Will and Emma reuniting. Now that Carl is out of the picture as well, I’m hoping we can actually see these two together. I mean, he put on a latex glove and polished her grapes. That’s love.

Another glimmer of promise was the fact that Kurt’s return to McKinley for the benefit set the stage for his permanent return. He misses it, and Blaine knows it. I don’t know how that pesky Karofsky problem will be taken care of, but I’m sure Kurt will return to McKinley – I’d link to where I read it, but I honestly can’t remember what website it was. I have a feeling Blaine will follow him, because it would be a bad idea to break up a couple the entire audience loves. Though, I guess with this show, you never quite know.

Even the performances in this episode left me feeling cold. Gwyneth covering Adele? Are you kidding me? Look, Gwyneth has a nice, pleasant voice. Her appearances on this show have turned me from a major Goop mocker to a mild fan. But Glee, puh-lease. VERY few people, if any, can cover Adele. Tina’s performance was blah, Mike’s dancing was great until he broke out that creepy mop, and I was too annoyed with the fact that Mercedes could convince an entire church choir to attend the benefit but not even her own parents to really absorb her performance. I mean, come on! Where was everyone’s parents?

Look Glee, everyone has a bad episode. If I can try and force the memory of the Grey’s Anatomy “Musical Event” out of my mind, I can certainly forgive this lackluster episode. Next week’s episode will be an hour and a half long, will feature (and is named after) Lady Gaga’s “Born This Way” and I’ll be reviewing the fashion featured in it over at You Know You Love Fashion. So please make up for this, mmkay?

“Night of Neglect” wasn’t all bad. There were these quotes and moments that made me giggle: 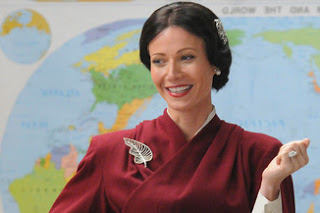