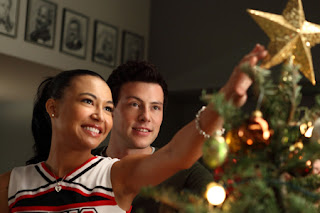 Glee Christmas! What could be better? Nothing, that’s what. I’m sure there will be some whiners out there (I read one Tweet last night complaining that the ‘Brittany is dumb’ joke is getting old. No. Brittany never gets old.) but  this Glee Christmas episode was an instant classic for me. I’m not going to throw around words like “best episode ever”, but the episode was warm and fuzzy and cute and gave me everything I wanted from A Very Special Holiday Episode.
The episode was a take on How the Grinch Stole Christmas, which was perfect because Glee already had the perfect Grinch (Sue) and the perfect Cindy Lou Who (Brittany).
Brittany and the Bieste
Finn and Brittany were super excited about Christmas, but others not so much. Will would be all alone for Christmas, Rachel was trying to embrace the holiday to win back Finn despite being Jewish, and Artie was shocked when he found out that Brittany still believed in Santa Clause. 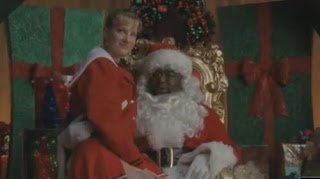 I love the Brittany/Artie relationship. Love. It. He is so much sweeter to her than he ever was to Tina, and she is adorable. His desperate attempts to help Brittany continue to believe in Santa were only out-“awwwed” by her request to Santa to have Artie walk again. Brittany’s dense and childlike personality is funny, but she can also melt your heart. She’s right, it’s not fair that Artie can’t walk. Artie desperately tried to arrange a visit from “Santa” (Coach Bieste) to break the news to Brittany that although the elves are working on some rad stem-cell research, they wouldn’t be able to give Artie the gift of walking this year. It sounds stupid, but it was heartbreaking.
Meanwhile, Rachel managed to stay totally likable this week with her attempts to win back Finn (seriously, he needs to get over the Puck thing) and her awesome wardrobe of festive outfits and floppy hats. Kurt also struggled with unrequited love after he helped Blaine rehearse “Baby It’s Cold Outside” and then confessed to Mr. Schu that he was totally in love with the guy. Both the duet and the scene of Mr. Schu and Kurt together, just two sad and lonely dudes, was beautiful.
As cuddly as a cactus, as charming as an eel 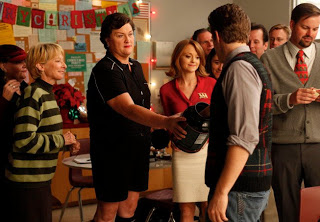 A lot of the humor this week came from Sue, who rigged poor Coach Bieste’s Secret Santa so that every teacher in the school got a present for her. Emma, Will and Bieste stood up to her and reclaimed all the gifts to go to charity instead, so Sue went full-on Grinch. She dressed her adorable minion Becky up as a rein-dog, put on a Santa suit and green face paint and stole Christmas from the choir room. It came complete with a “I’m taking this tree back to the North Pole to fix it” moment with Brittany and was both totally over-the-top and totally awesome. 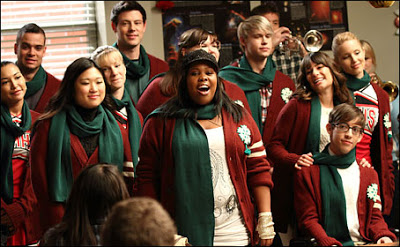 The show ended with several warm and fuzzy moments. First of all, Bieste secretly purchased a fancy robot thing called the “Rewalk” which helped Artie temporarily stand on two feet and walk. The look on Brittany’s face and the reactions of all the glee kids were fantastic, and it suddenly got very dusty in the room. Then all the kids sang Christmas songs for the teachers for charity (where was the one who threw a shoe at them earlier?) and Sue’s heart grew three times bigger. She got the glee kids together to return all the Christmas stuff she stole to Schu’s apartment so that he wouldn’t have to be alone on Christmas Eve. It was so heartwarming that I’m not even going to ask why no one at McKinley High gets a Christmas vacation and whether any of these kids’ families minded that they were hanging out at Schu’s house on Christmas Eve.
What made me really happy about the episode was that it ended with Will saying to Sue “I thought you hatd the holidays,” and her responding “Nah, I just hate you.” We’ve seen this before, when Sue saved the glee club, but I’m always impressed at how they manage to balance Sue’s character.
The music from the episode was awesome, and I’ve been playing my Glee Christmas album like crazy since it came out on iTunes. If you like Glee and you’re not a soulless Grinch, I don’t see how you couldn’t have enjoyed this episode. Right? Here are some of the best lines and moments (there were a lot) from the show: 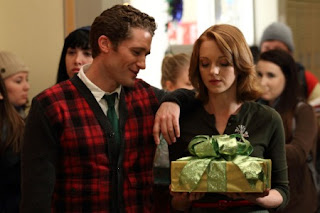 And finally, here are my wishes to Santa when it comes to Glee:

I was planning ten, but can’t come up with another one right now. So take it to the comments – what are your Christmas wishes for Glee?