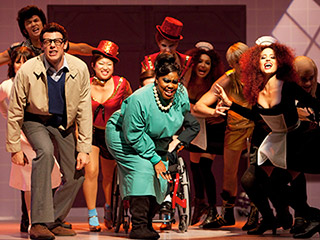 Is this how the non-Britney fans felt during her tribute episode?
I have a confession to make: The Rocky Horror Picture Show is one of my pop culture blind spots. I’ve never seen it, and I know very little about it. So I felt a little left out during the Rocky Horror episode of Glee, and I feel very unqualified to write about it. But it’s my blog, so I have to try.
The costumes were kind of cool. The songs were good, in that way that songs you’ve never heard before can be good. Storyline? I didn’t see much of one. Hmm…yep, it’s going to be really hard for me to write about this episode. I mean, what am I supposed to say? It was good, I guess.
The thing is, I knew this would happen. I meant to rent and watch the original movie over the weekend, but life got in the way. OK, shopping for a Halloween costume and finishing the fourth season of Friday Night Lights and generally being lazy and cranky after a long, tiring week got in the way. So I knew I’d suck at reviewing this episode. Frankly, I’m shocked you’re still reading.
So before wrapping it up and begging you all to supply me with real, educated thoughts and opinions in the comments section, I’ll briefly discuss what I liked.
I liked how New Directions was actually working on performing the show, rather than just the Rocky Horror songs being worked into the episode. I liked the musical numbers, and I especially liked hearing Emma and Carl sing. (Touch-a Touch-a Touch-a Touch Me was fantastic, and perfectly suited the development of Emma’s character.) The stuff about Finn being uncomfortable with his body was good, and the fact that the men were the ones being objectified in the musical was a welcome twist from the norm. And I liked the plot development we saw with the Will/Emma/Carl love triangle – although the show is going to have to work a little harder to keep Will Schuester likable, because I’m starting to root against him.
Here are some other lines and moments from the episode that I liked (and understood):
OK now, peoples who actually understood this episode: Tell me what you thought!