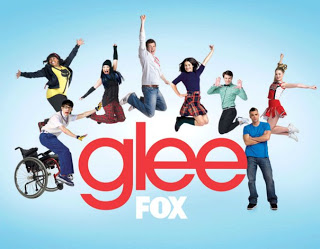 Oh dears.
This is what is so difficult about Glee. I love the show. I really do. And the people who watch it every week and then complain about it every week irritate me to no end. But what can be so frustrating is when an episode, like last night’s, has such potential to be good and then makes a couple of major missteps to prevent that. I wanted to like “Never Been Kissed”. And in many, many ways I did. But there were two things that prevented me from being able to rave about the episode. So let’s get those out of the way right now.
The football player kissing Kurt. People are mad because this was such a stereotype – that the homophobe is really in the closet. While I don’t think that there’s any rule that says Glee can’t be stereotypical at times (lots of the characters have stereotypical characteristics), it was just such an easy out. Kurt standing up for himself against a bully was such a beautiful moment and the football player kissing him, then denying it, kind of ruined that. Because guess what? There are LOTS of homophobic jackasses out there who are not in the closet. And it would have been nice to see Kurt confront one.
The other problem was the whole Coach Bieste thing. Some of it worked, so I’m not going to say I hated the entire storyline. But Will kissing Coach Bieste because she’d never been kissed before? It felt like well-intentioned pity, and it wasn’t fair to Bieste’s character. Will’s in love with Emma, he doesn’t have any feelings for Coach Bieste so it was unfair of him to kiss her like that. Plus, it was kind of weird to watch. I felt like the message I thought the Glee folks were trying to get across – that everyone is deserving of love and respect, or something – was nice, but the scene didn’t quite hit the mark.
Boys, Boys, Boys
The girl’s mash-up of Halo and Walkin’ on Sunshine from last season is one of my favorite Glee tunes, so I was psyched to hear Mr. Schue announce that New Directions would be having a second annual boys vs. girls contest. I was also psyched because Puck was back! Oh, how I missed him.
As I mentioned before, one of the big storylines this episode was Kurt being bullied. This is obviously a very socially important storyline, but I felt like it still fit in really well with the rest of Glee. It felt like a natural obstacle for Kurt and his character, not a ploy for media attention as some Glee-hating imbeciles on message boards have suggested.
Kurt really hit his limit with taking the high road when it came to being bullied, especially because the bullying seemed to have escalated. And therein lies the problem. Kurt should not have to take the high road. There should be other people, especially faculty, standing up for him. As Kurt painfully pointed out, everyone is sympathetic but inactive. The reigning idea is that if you’re gay – or gay and out, I guess – you’re just going to have to learn to deal with the fact that your life will be miserable. 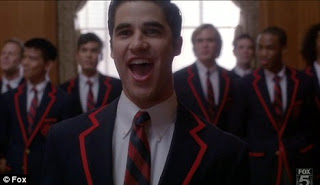 After a conversation with Kurt though, Mr. Schue decided to challenge the kids a bit and have them sing songs traditionally performed by the opposite sex. The boys quickly became frustrated with Kurt’s suggestions for song choice and costume though, and sent him off the spy on some competition at the all-boys school Dalton Academy. Dalton was basically a dream school. Everyone dressed well. Their a cappella glee club, the Dalton Academy Warblers, was popular. Their performance of Katy Perry’s “Teenage Dream” knocked my socks off. The lead singer, Blaine, was gorgeous, talented, kind and gay. And he immediately spotted Kurt as a spy.
The thing was, he was crazy nice to Kurt. Since a character on Glee can’t sneeze in an episode without it making the entertainment sites weeks beforehand, we already knew that Blaine was coming. He and Kurt have a song together on the Glee Christmas album, for which I am eagerly awaiting. He’s already acting as something of a mentor for Kurt, but did anyone else feel a bit of an urge to take up a collection to pay Kurt’s tuition at that dream school? I did! 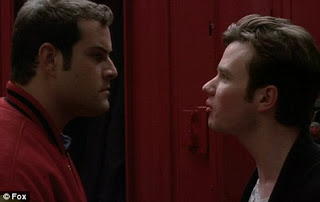 I’ve already talked about what I didn’t like about Kurt’s confrontation with the bully, so now I’ll talk about what I thought worked. I loved seeing Kurt stand up for himself. It was heartbreaking and beautiful. And even though I didn’t love the idea that this bully is actually a closeted gay (I think that is a stereotype similar to the stereotype that every gay dude is constantly trying to hit on every straight dude he comes across), it was a necessary evil for the rest of the storyline – that this asshole (pardon my language, I usually try to keep the blog family friendly) stole Kurt’s first kiss. Now that’s just heartbreaking.
Beauty and the Bieste
OK, now let’s talk about the other storyline. It all began when Sam and Finn discussed how neither of their girlfriends would put out. Finn told Sam about how he remembers the time he almost killed a mail carrier in order to cool off, and encouraged Sam to find a cooling off image of his own. Enter Coach Shannon Bieste.
OK. I want to take a little detour here to talk about something that annoys me a little. I would like at least one character on Glee (I’m talking the kids here, not the adults) to have a healthy attitude about sex. Now I’m not saying that you can’t be a virgin and have a healthy attitude, or can’t have a lot of sexual partners and have a healthy attitude. Either way, it’s not my place to judge. But right now, it seems that the girls on Glee have been put into two camps. Brittany and Santana are the school sluts who hand out sex like religious nuts hand out pamphlets, and Quinn and Rachel are prudes who are considered teases by all the guys. I appreciate that in the situation of Tina and Mike the gender roles have been reversed, but can’t someone on this show be in a relationship and not be a polar extreme? Quinn had sex and got knocked up, does that mean she’s never to have sex again? I would love for a couple on Glee to walk into Emma’s office, ask about protection and make an educated decision to have sex because they want to. It would be a nice change from boys losing their virginity to either Brittany or Santana, and Rachel and Quinn making out on beds while constantly removing their boyfriends’ hands from various parts of their bodies. Just sayin’. OK, end of rant.
The problem was that no one kept their images of Bieste in compromising positions to themselves. She knew something weird was up, and confronted Will about it. He told her, and she was heartbroken. I was kind of torn about that scene. I mean, if Will is so well-intentioned why didn’t he just make up a lie? Or why did he have to tell her the truth in such detail? Who wants to hear that kids imagine you posing in lingerie in order to get their minds off sex? Bieste quit, and Will was devastated. 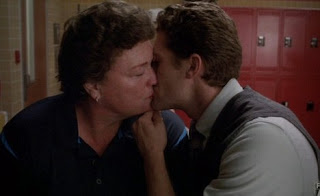 I know some people were freaked out by the idea that Will talked to all the kids about sex and their Coach Bieste anti-fantasies, but I actually found him way more likable this episode than I have in a long time. When he moaned after he told Coach Bieste the truth and she stormed out with her feelings hurt, you could tell he felt horribly that the conversation had gone so poorly. That’s the old Will that I always liked. I’m not going to talk that much about the scene where Will kissed Coach Bieste, because I’m still really torn. On the one hand, I liked the general message and I really like Coach Bieste’s character. On the other hand, it just didn’t quite work. I’ve always said that people shouldn’t be so hard on Glee, and that I think people over-analyze it on a weekly basis, so I’ll leave it at that.
Mashups and More 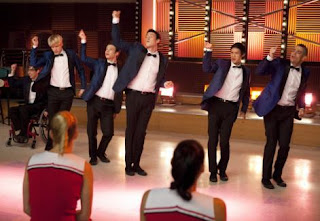 How fantastic were those two mash-ups? Seriously, the tunes from tonight’s episode were some of the best. I also love the new friendship between Puck and Artie, which blossomed when Puck decided to help out Artie as his post-juvie community service. Helping a kid in a wheelchair get a date with Brittany totally beats picking up trash. Everything worked when it came to this subplot – I loved Puck and Artie’s duet when they were busking for money, anytime someone from Glee goes to Breadstix is a good time, and the fact that Puck had actually been really scared in juvie added new dimension to his character.
OK, so what did you think of the episode? Could you overlook the missteps to enjoy the many aspects that were fantastic, or are you officially on the Glee-hating bandwagon? Here’s what else I loved about this episode: