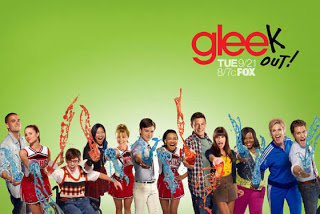 is back! Glee is back! Glee is back! And guess what? It was really, really good. All signs from this first episode suggest that the show has not suffered from a big ego or overexposure. The tongue-in-cheek TMZ style opening was priceless. Apparently Jacob Ben-Israel was blogging about New Directions all summer long, and he did not have good things to say. He told Will that “Your glee club song selections sound like they came from a drag queen’s iPod” and “Did you know there’s a forum on my blog begging you to stop rapping?” I’m with him on the rapping, but I think drag queens have fantastic taste in music.


Will and the glee kids were on the hunt for new members because apparently Matt transferred. Oh Matt, we hardly knew ye. No seriously, I can barely remember what the guy looks like. Life’s a trade off, though, because we got to see a lot more of Mike Chang in this episode than we did all season – he and Tina hooked up over the summer. Other summer events included Finn and Rachel dating, Santana getting a boob job and Brittany getting lost in the sewers.

To try and drum up some excitement about glee club the kids performed “Empire State of Mind” outside. I’ve got to admit, when I heard this version of the song online last week I thought it was kind of lame. But seeing the kids in their New York City T-shirts, dancing and having a great time, I kind of dug it. It was adorable in that nerdy, campy kind of way. The song was a tribute to the fact that nationals will be held in New York, but it did nothing to change the glee club’s image at McKinley High.


The glee club focused their efforts on two new recruits. The boys tried to win over Sam Evans (played by Chord Overstreet – is that his real name?!), who has the lips of Mick Jagger, the haircut of Justin Bieber and the hair color of Paris Hilton. And despite those last two problems, the kid is still incredibly cute. Finn overheard him singing “Every Rose Has It’s Thorn” in the locker room shower and convinced him to jam with the guys. I loved the boys’ cover of “Billionaire”, but I’ve got to wonder why Artie does the majority of rapping. I think Puck might do a less embarrassing job. “I like his confidence,” Artie observed. “But the Bieber cut’s gotta go.” Hey Artie, have any trouble getting your wheelchair into that glass house? Just sayin’. 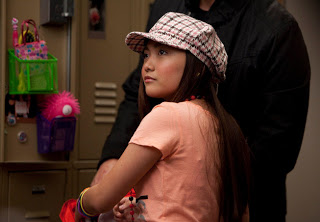 The girls tried to win over Sunshine Corazon (played by Charice, that super-talented pint-sized singer that David Foster discovered and Oprah promoted) who wears adorable clothing and has an incredible voice. However, unlike Finn Rachel was anything but welcoming. She originally encouraged Sunshine to join glee club, because she thought Sunshine was an exchange student who couldn’t speak English and would admire Rachel from the sidelines. “SWAYING. IN. BACKGROUND. CAN. BE. FUN.” she shouted at Sunshine. Then she heard Sunshine sing, and after an amazing duet of Lady Gaga and Beyonce’s song “Telephone” (that was rudely and hilariously shut down by Sue Sylvester) Rachel realized she had some serious competition on her hands. So she did what Rachel Berry does. She sabotaged her. Instead of sending Sunshine to glee club auditions, Rachel directed her to a crack house. Apparently an Asian crack house, because Tina and Mike found out.


Sunshine auditioned with the song “Listen” and blew the glee club away, but she was quickly snatched up by Vocal Adrenaline’s new coach – all thanks to Sue Sylvester. 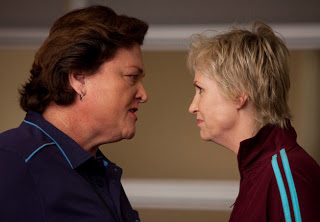 Oh, Sue. Sue was in fine form this episode. At the beginning of the episode, she and Will found out that their budgets for the Cheerios and New Directions were being cut by 10% to funnel more funds towards the football team – which is under new leadership. This makes me happy, because I never cared for Ken Tanaka. Now Coach Bieste is in town, a woman so large and gruff she brought to mind the principal from Matilda. For a short time, she was a common enemy for Will and Sue. They had to work together to bring her down and get their budgets restored. Shenanigans like ordering a lot of pizzas in her name and not letting her sit down in the teacher’s lounge ensued. I wish they’d let this go on a little longer. I liked seeing Will and Sue be mean together, and it gave the show a new dynamic. Instead, we found out that Coach Bieste is actually quite nice and Will made amends with her – and made an enemy out of Sue (again), so she retaliated by encouraging Vocal Adrenaline to poach Sunshine.


Speaking of the Cheerios and football, those auditions were going on too. Well, I guess in football they’re called try-outs, but whatevs. I was a music geek in high school, not an athlete. Sue held auditions for the Cheerios (along with Becky – loved seeing her back) and refused to see Quinn – until Quinn reminded Sue that having her very own Bristol Palin could be beneficial. She cut Santana as head cheerleader after she found out about Santana’s new boobs and replaced her with Quinn. I LOVED the resulting cat fight between Quinn and Santana for one reason – Brittany’s line of “stop the violence”. Actually, it was more like “stop the violence” because it was the least passionate cry for peace ever. The best part of Cheerios auditions was Finn, though. Yes, the man with two left feet auditioned for the Cheerios after Bieste kicked him off the football team for suggesting Artie try out for the team. Poor Finn. Not the brightest crayon in the box.


Speaking of bright crayons, how great was it when Sue tried to convince Brittany to say that Coach Bieste had inappropriately touched her. She pointed to a doll’s boobs, but then Will convinced her to tell the truth. The best part? Seeing Brittany walk out of the office clutching the doll like a baby.


Overall, I thought the first episode back of Glee was incredibly strong – and there’s lots more to come. I’m pretty psyched for the Britney/Brittany episode, and I’m looking forward to seeing a Will/Emma/John Stamos love triangle.

Glee: The Sunshine of my Life
https://haligonia.ca/glee-the-sunshine-of-my-life-25889/