I hate to say I told you so, but…OK, I actually love to say I told you so. I freakin’ thrive on it. And last week I defended Glee’s heavily criticized Britney tribute by saying that what’s great about Glee is that it delivers both silly, campy episodes (Britney) and emotional, plot-driven episodes (tonight). I even said hopefully in the coming episodes, we’d get to see some of that heavier material. So, you know. Told ya so.
OK, enough gloating. Who cried on Tuesday night? I know there are probably still some haters out there, because when it comes to Glee there are always haters out there, but I thought it was one of the best episodes Glee has done. Ever. It’s right up there with Kurt’s coming out episode last year. It was beautiful, and Ryan Murphy did a good job of balancing out the many different views people have on religion.
A Toast to Cheesus
“Grilled Cheesus” focused on religion in two ways, one silly and one serious – Finn spotted a likeness of Jesus in his grilled cheese sandwich, and Kurt’s dad had a heart attack. Finn’s religious experience was a funny, lighthearted way to broach the heavy topic. Since it wasn’t the heart of the episode, though, let’s go over Finn’s religious experience all fast-like, like the “That’s what you missed on Glee” spot at the beginning of each episode.

Finn prayed to his Grilled Cheesus for three things: To win an upcoming football game, to touch Rachel’s breasts, and to become quarterback again. All three things happened, but he felt bad because the reason he became quarterback was because that blonde, big-lipped kid got hurt. (Also, I can’t believe they actually let Artie out onto the field?!) There was a great scene between Finn and Emma where she explained that no, his sandwich was not a direct line to god. He got all depressed and sang “Losing My Religion”, which I didn’t think was nearly as terrible as the Twitterverse complained it was. Then he ate the Grilled Cheesus and I screamed out “EW, Finn! How old was that sandwich???”
The most important thing about Finn’s religious experience was the discussion it sparked about faith and religion right before Burt’s heart attack. Quinn and Mercedes are believers, Kurt’s an atheist, Rachel wants to raise her kids Jewish, Puck sang “Only the Good Die Young” and Brittany did a cute little finger dance.
Glee, Pray, Love 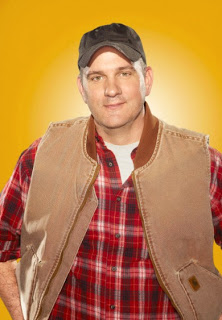 OK, let’s discuss the heart of Tuesday night’s episode – Burt Hummel. It all began very normally, as it does. Kurt dropped off breakfast to his dad – a healthy one, because “Suzanne Somers says that skipping breakfast is suicide”, and then he and his dad had a disagreement over Kurt’s readiness to skip their traditional Friday night dinner in favor of social outings like the sing-along Sound of Music. Later, the foreshadowing was obvious, but I hadn’t seen any previews or spoilers for this episode, so I had no idea what was going to happen.
In the middle of joking around with a customer, Burt Hummel had a heart attack. Emma and Will rushed Kurt to the hospital where they found out that Kurt’s dad was still alive, but comatose. The doctors couldn’t say when he’d wake up. It was so, so sad. As viewers, we’ve seen Kurt and his dad go through so much that this was more emotionally resonant than it would be with any other character. Plus, Kurt doesn’t have a mom. No one wants an orphaned Kurt.
Kurt’s interactions with his classmates after the news of his dad’s heart attack got out were emotional, but peppered with humor. Especially thanks to Brittany, who told Kurt “I did a book report on heart attacks if you wanna give it to the doctors. I got knocked down an entire letter grade because it was written in crayon.” It was really sad to see how upset Finn was because no one had told him. I understood why he wasn’t on Kurt’s mind, but Finn had come to think of Burt as a father figure. As his friends offered their prayers and support, Kurt pushed them away. He appreciated the beauty of Mercedes’ performance of “I Look to You”, but not the message. “I appreciate your thoughts,” he told them. “But I don’t want your prayers.”
Church, State, Sue

What was so well done about this episode was that everyone’s voice was heard. We heard why some characters believed in god, or Jesus, or spirituality. We learned why some characters didn’t. It felt judgment free, and that isn’t easy to do.
Sue was in Kurt’s corner, only she was going to greater lengths to prevent the glee kids from singing religious tunes. She offered Kurt support, telling him “I wouldn’t wish it on my worst enemy . And I guess I wouldn’t have to. I think Mary Lou Retton is like an orphan or something.” It felt like Sue was using Kurt to push her own agenda until we saw her talk with Emma.

Oh, how I missed Emma in the back nine last season. There’s a lot more to her character than her on again/off again romance with Will. I love how she interacts with other characters on the show. Sue explained to Emma that she used to believe in god, but she stopped after her prayers for her sister went unanswered. She prayed every night for her sister to get better so people would stop making fun of her. It was a compelling argument, but so was Emma’s.
I Wanna Hold Your Hand
Rachel’s version of “Papa Can You Hear Me” was beautiful, especially when she was in the park with Finn. It was a little weird to watch her sing it to Burt in the hospital room, but it looked as though Rachel, Quinn, Mercedes, Finn and Finn’s mom were having some sort of musical prayer group. Kurt asked them to leave, and then sang his own kind of spiritual song at glee rehearsal the next day – “I Want To Hold Your Hand”, because it reminded him of having his dad by his side at his mom’s funeral. Like that wasn’t enough to break your heart, while he sang we watched flashbacks of a miniature, bow-tied Kurt (seriously, that kid was the spitting image of real Kurt) having a tea party with Burt. 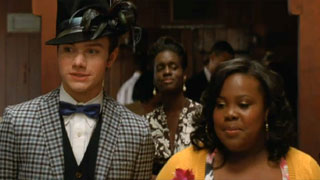 This episode really let Mercedes shine, as well as Kurt. They had a great moment when Mercedes told Kurt she wanted to be there for him, but didn’t know how to talk to him anymore. It wasn’t that Mercedes was pushing her beliefs on Kurt, she was just supporting him in the only way she knew how. She convinced Kurt to attend church with her, because she’d asked the whole congregation to dedicate the service to his dad. She sang a fantastic rendition of “Bridge Over Troubled Water” with the choir, Kurt wore a fabulous hat, and most importantly he seemed to get a sense of the community that church and faith can bring – something that hadn’t really been expressed yet.
I know a lot of people cried throughout the episode, but I held on until the end when Kurt went to the hospital to talk to his dad. Hearing him tell his father how much he needed him, and how sorry he was for how he’d acted before…it was truly heart-wrenching. They MUST give Chris Colfer an Emmy next year. Can they put him in for Supporting Actor in a Drama even though the show is a comedy? It seems unfair. Anyway, I digress. The scene really got to me.
The other heartbreaking scene was between Sue and her sister, Jeannie. Sue is still so angry over her sister’s situation. And that’s fair. It’s a raw deal, and Sue has had to watch her sister suffer. But Jeannie is happy, and so at peace. Jane Lynch acts the hell out of these kinds of scenes, and it’s what makes Sue Sylvester such a compelling character.
Here’s what else was great about this episode of Glee: 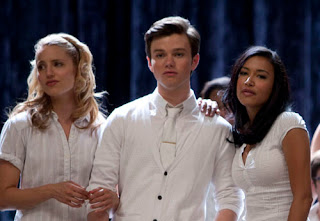 What did you think of “Grilled Cheesus”? Are you still tearing up at the thought of Kurt begging his comatose dad to squeeze his hand?
(Glee, S02E04, Aired 10/05/10)

Glee: What would Cheesus do?
https://haligonia.ca/glee-what-would-cheesus-do-26935/