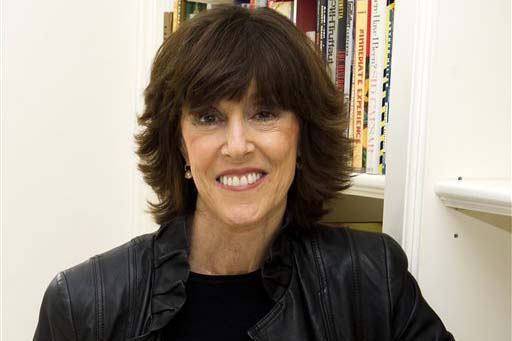 As many of you probably know, Nora Ephron died last night after suffering from leukemia. She was only 71, and I bet she had a lot more to offer. As someone who’s loved her work since I was old enough to start watching and reading it, I’m very sad. I’m wanted to take the day off work to stay home, watching her movies and laughing/crying sad.

Nora Ephron wrote wonderful articles, books and movies – no, not television. But I love her so much, I wanted to talk about her on here anyway.

Nora was born in New York City, and her parents were successful playwrights. (Hear that, critics of Girls, Lena Dunham and Zosia Mamet? Sometimes talent just breeds talent.) She was an important female writers in the 1960s and beyond, and I read a lot of her work back when I was in journalism school. I wish I could say that her writing inspired me to actually pursue a career in journalism myself, but at least I can say I’ve never given up writing as a hobby. What I wouldn’t give to be able to construct words into phrases and prose the way Nora could.

My two favorite films of all time are Nora Ephron movies. Are they the best movies ever made? There’s no such thing. Obviously, there are serious, solemn, thought-provoking films that you appreciate and respect. But you can’t really “enjoy” a movie about the Holocaust. You don’t pop Schindler’s List into your DVD player for the 300th time when you’ve had a bad day.

I have seen When Harry Met Sally and You’ve Got Mail countless times. Just last night, a friend of mine tweeted that Nora Ephron movies are the reason she knows I don’t actually have a cold, black heart. (A joke I make from time to time, because I don’t cry at movies about precocious kids with cancer and animals make me nervous.)

“That caviar is a garnish!”

Having been born in 1986, the first Ephron movie I saw was You’ve Got Mail. I didn’t see it in theatres, but shortly after. I would have been around age 13 or so, and I loved it. The Internet was new back then, I’m not sure I even knew about online dating. I’d been to New York and dreamed of living there. I wanted to be Kathleen Kelly, I wanted to marry Tom Hanks. The movie was warm and cute and romantic enough to draw my teenage self in, but it was also witty and sharp and full of lines I longed to say in real life. I wanted to tell little anecdotes about the stress of ordering a Starbucks coffee or seeing a butterfly on the subway. I wanted to know how to talk about every day, human things in a way that made them more humorous than you thought they could be.

I’ll have it on the side.

Later, in high school, I watched When Harry Met Sally for the first time. I wondered why no one had shown it to me before. I hadn’t been a big Sleepless in Seattle fan and my expectations were inaccurately low. Of course, I loved it.

I blame When Harry Met Sally for the fact that I’ve never really been out on a first date. I mean, sure, yeah, I’ve dated. I’ve been taken on dates. But I have never gone out for dinner or coffee or drinks with a  stranger. Every boyfriend I’ve ever had has first been a friend. And now I’m engaged, so that opportunity has been lost. (Don’t worry, I’m not that broken up about it. I mostly just get jealous of all the great writing material bad dates seem to inspire.)

Because of When Harry Met Sally and You’ve Got Mail, I thought that any good relationship had to be an epic tale of star-crossed lovers – two people who were completely right for each other and didn’t know it. I was waiting to think “Look! The right guy has been right here, under my nose this whole time!” And you know what? It’s actually true – my fiancée and I were friends for several months before we ever even thought about dating one another. It’s not Harry and Sally levels of star-crossed, but it’ll do.

I love that Nora was able to make romantic comedies smart. Her women were smart. Kathleen Kelly’s business went under in You’ve Got Mail, which you’d think would be a total downer. But you never questioned whether she’d land on her feet. Of course she would. In the fantasy sequel in my mind, she’s a very successful children’s books author.

She didn’t rely on tropes. Sally wasn’t a klutz, to try and make her seem less attractive. Harry always knew she was beautiful, smart and funny – though she was also the worst kind, a high maintenance gal who thinks she’s low maintenance. Her characters weren’t Manic Pixie Dream Girls – in fact, they skewed more towards the neurotic than the winsome, impulsive type, so, I really have no idea why I of all people could relate to them… They were successful without being career-driven bitches who didn’t have time for love, and the leading men weren’t horrible brutes who could only be transformed by passive, patient girlfriends.

Without Nora Ephron, we wouldn’t have Nancy Meyers or Tina Fey or Mindy Kaling. My world would be different, and so today I’m sad.