Wrecked, abandoned, and hazardous vessels, including small boats, pose environmental, economic, and safety hazards, and are a concern for coastal and inland water communities across Canada.

The Government of Canada, through its Oceans Protection Plan, is taking action to deter this irresponsible practice. The Honourable Marc Garneau, Minister of Transport, and the Honourable Jonathan Wilkinson, Minister of Fisheries, Oceans and the Canadian Coast Guard, are pleased to mark yesterday’s passage of Bill C-64: the Wrecked, Abandoned or Hazardous Vessels Act. 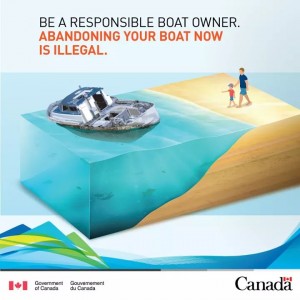 The Act prohibits vessel abandonment and brings into Canadian law the International Convention on the Removal of Wrecks, 2007. It increases owner responsibility and liability for vessels, addresses irresponsible vessel management, and enables the Government of Canada to remove problem vessels. Not complying with the Act now can result in penalties of up to $50,000 for individuals and $250,000 for companies or corporations, while regulatory offence prosecution could result in a maximum fine of $1M for individuals and $6M for companies or corporations.

As part of the National Strategy to Address Canada’s Wrecked and Abandoned Vessels, the Government of Canada launched two short-term funding programs in 2017 to support coastal communities and other eligible recipients in removing and disposing of high-priority, smaller vessels: Transport Canada’s Abandoned Boats Program, and Fisheries and Oceans Canada’s Abandoned and Wrecked Vessels Removal Program. Transport Canada’s program also supports education and awareness activities and research on vessel recycling and design. Other measures being undertaken as part of the National Strategy include improving vessel owner identification, creating an inventory of problem vessels and assessing their risks, and establishing a polluter pays approach for vessel clean-up.

Launched in November 2016, the five-year, $1.5-billion Oceans Protection Plan is the largest investment ever made to protect Canada’s coasts and waterways. Over the past two years, the Government of Canada has invested in hundreds of projects that are making the marine safety system stronger, and protecting coastal environments and marine species more than ever. Based on the latest science and technology, Indigenous partnerships and collaboration, these projects bring us closer to healthier, cleaner and safer oceans.

“We are proud to see the passage of this significant legislation, which will enable us to better protect our coastlines by requiring responsible vessel management and prohibiting vessel abandonment. Canada’s coastlines are an important part of Canadian life and culture, and we must work together to protect and restore them.”

“Abandoned and wrecked vessels can pose hazards, clutter our shorelines, affect sensitive marine habitats and species, and disrupt community activities. This strengthened legislation ensures these problems are addressed quickly, before they become more serious. With the Oceans Protection Plan, we are taking action so that our coasts and oceans will be safe, clean and healthy for future generations.”

The Honourable Jonathan Wilkinson
Minister of Fisheries, Oceans and the Canadian Coast Guard