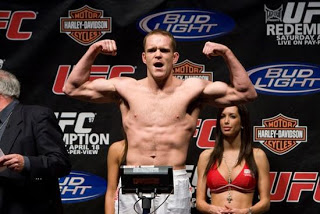 Cole Harbour’s TJ Grant gets back to work September 19th

by Derek Leblanc
While it may have been two months since his last fight, T.J Grant has wasted no time in getting back into the octagon. The UFC welterweight from Cole Harbour will face Julio Paulino at UFC 119 which will to take place September 19th at Conseco Feildhouse in Indianapolis, Indiana.

The fight was first reported yesterday by mmajunkie.com that both men had agreed to the fight. Now it has now been signed and confirmed by Grant’s manager Scott Maclean. Grant is coming off a loss at UFC 113 in Montreal by majority decision to Johny Hendricks.

Grant is 2-2 in the Zuffa based organization with wins over Ryo Chonan and Kevin Burns.

Paulino is coming off a loss in his UFC debut against Mike Pierce at UFC on Verses One back in March. The Alaska born fighter has a record of 17-3 with wins over UFC veterans like Terry Martin.

Paulino was supposed to fight last weekend at UFC 116 against Daniel Roberts but had to withdrew due to injury and was replaced by Forrest Petz, a fighter Grant beat two years ago.
No word is to if the fight will be shown on the pay per view.
Derek Leblanc is a local sports writer and broadcaster. Email Derek at derekleblanc34@gmail.com.