Two of my favourite graphic novelists have published new books on the subject of parenting (kind of a big deal in my life, as the mother of a four-year-old). Although the parent/child relationship is the subject of both books, Alison Bechdel and Guy Delisle approach the topic from two very different perspectives.

The title of Bechdel’s Are You My Mother?: a comic drama (M) reworks P.D. Eastman’s classic children’s book by the same name. Applying ideas developed by the 20th-century psychoanalyst Donald Winnicot (perhaps best known for his concept of the “good enough mother”), Bechdel tries to make sense of her mother’s life and their complicated relationship. It’s a touching and satisfying follow-up to her last graphic memoir, Fun Home: A family tragicomic, which focused on Bechdel’s relationship with her father. 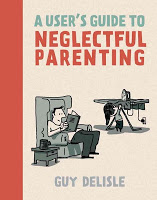 Guy Delisle may be best known for his graphic travelogues, in which he records his unique outsider’s perspective of places like Pyongyang (2005), Burma (2008), and Jerusalem (2012). When I noticed that he had published a parenting memoir, I was quick to suggest that the Library purchase a copy. A User’s Guide to Neglectful Parenting (M) is appalling, shocking, hilarious and entirely too short; a great antidote for any parental guilt you might be carrying. Anything you’ve done to your kids is unlikely to top Delisle’s chainsaw prank! 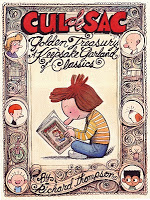 Although not new, I would be remiss not to mention another “family” favourite, the comic Cul-de-Sac (M), by Richard Thompson.