[Wrapping up a great week of East Coast good spirits is brewmaster at the Hart and Thistle Gastro-brewpub in downtown Halifax. And, if you need an excuse to grab a pint, it’s actually his birthday tomorrow so head over for a special dinner and release of ‘Double Simcoe SMaSH’. It’s also your last chance to enter the contest this weekend to win some great items donated by the guests. Leave a comment here or tweet about your fave East Coast beverage using the hashtag #ECBC. Check out the full contest rules and prizes.]

When I was asked about writing a guest post here my first thought as a professional brewer was to write about brewing and how it has redirected my life and influenced those close to me.

In my previous life living outside Amherst, Nova Scotia I was a meat cutter, a Christmas tree farmer and an automotive paint technician but then something happened—I started home brewing and by the early ‘90’s I was hooked. The never ending quest for more information on the art and science of brewing became more and more intensive and the supply of books available was suddenly insufficient. I started working in the craft brewing industry in 1994 and soon after enrolled with a reputable brewing school. In 1996 I graduated from the American Brewers Guild in Davis, California and have brewed professionally in several states and provinces since. Some notable local breweries I have brewed for are Garrison Brewing Company and more recently the Pump House Brewery in Moncton, NB. before returning to Halifax where I currently brew for the Hart and thistle Gastropub and Brewery while I continue work on other projects.

I was a bit of a foodie before I started brewing but then something happened – brewing brought it all together, beer and food have become a wonderful marriage, in my own mind at least. When I brew I am cooking, nothing more nothing less. Not only do I have a serious relationship with beer and food but I love to mix it up by putting the two together, I cook most food with beer and strive for that perfect pairing at the dinner table. As I became more involved with beer I became more of a foodie, learning to brew has made me a better cook and learning to cook has made me a better brewer, however there seems to be several annoying drawbacks to all this seemingly glorious food stuffs.

I seek fresh local foods with flavour. I love food as can be witnessed by my ever increasing girlish figure. I smoke cheeses at home, I cure and smoke bacon (mmm bacon) and other meats at home, I make my own sauces and breads, I even went so far as to invest an almost foolish fortune on a ceramic cooker and grill to help emphasize these gastronomic delights, a Primo. A lot of this may have stemmed from the sensory analysis training at brewing school, or maybe I just drank too much beer and had the munchies all the time. That’s not it! Dining out has become a bit of a crap shoot as I am sure a lot of you know already. Some of the things I love so dearly can be dreadfully disappointing if I happen in the door of the wrong establishment bent on trying out the new place I’ve never heard of. Can I really blame this all on beer, I say yes.

This may come as no surprise but the drink list at any given establishment strictly dictates both where I dine and drink. I want fresh local beer with flavour and won’t settle for tasteless rice or corn beers, I scoff at microbreweries that purposely dumb down their products lightening the flavours in hopes not to offend the palate. The selections are becoming better and better as time progresses but the choices of places that carry good fresh local craft beer are still quite limited. Sure I’ll opt for wine on occasion but beer is the drink of choice for me. After all beer is the new wine isn’t it? I’d love to see more establishments around Nova Scotia with good local beer on the taps, with beer/food pairings or featuring foods infused with beer, just one more drawback the great world of beer as I know it has bestowed upon me – it is a challenge to find good beer and food under one roof.

My philosophy on brewing is to think outside the box, not being restricted to styles but rather to what tastes good. To think of it as food, wait… beer is food. I am an advocate of both great food and beer and always try to cook, eat, brew and drink locally as much as possible. I unwittingly promote the world of craft beer to everyone that comes within arms reach. While they are there I could be caught inviting them over for a ribeye or forcing a brick of freshly smoked cheese or some home-smoked bacon porn on them. Heck any beer advocate would do the same wouldn’t they? I’m still blaming it all on the beer though. I think the same would happen to any of us whom discover the joy found inside a good, fresh, local pint.

Since I can’t let up on the bacon (life is always better with bacon), here’s something anyone can do at home if you have some sort of little smoker: 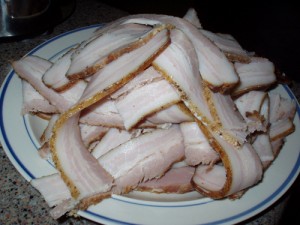 Bring all ingredients to a boil until sugar and salt is dissolved.

Allow to rest for 20 minutes then refrigerate.

When completely cool submerge the pork belly in the brine for 3 to 4 days for the cure. Personally I prefer 3 days, the longer the soak the saltier it becomes.

Remove from brine, rinse and pat dry. Allow to dry further in the fridge on a rack for 2 more hrs.

Greg Nash is the brewmaster for the Hart & Thistle Gastropub and Brewery. You can read more about his handcrafted cutting edge beers on the Hart and Thistle Brewers Blog.