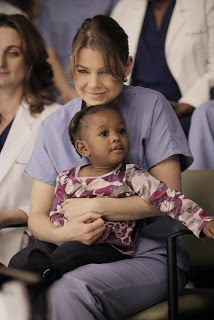 I won’t be writing a full review of Thursday’s Grey’s Anatomy since I didn’t have a chance to watch it until Saturday morning, but I did want to check in and mention that it was another great episode. Grey’s has really been toying with my emotions over the past several seasons, and I’m sure the show will continue to be hit and miss. But lately it’s been on a good run, and “Separation Anxiety” continued that streak.

First, let’s get this out of the way: Zola is really damn cute. Seriously, she’s rivaling Hope (Raising Hope) and Original Lily (Modern Family) for cutest baby on TV.

Now, can we talk about Teddy for a minute, and how she was getting Cristina to recite the details of Henry’s fatal surgery over and over again? That was effed up, y’all. I’m still not sure where Teddy will fit into the series when this storyline has run its course, but it was interesting to have to watch Cristina be so stoic when she herself was dealing with PTSD not so very long ago. I was surprised that Teddy was even working though, only two weeks after losing her husband in that very hospital. But the episode was good, so I’ll ignore that issue. 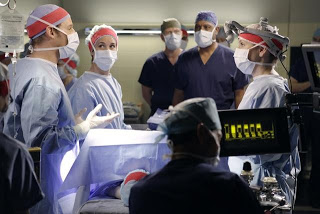 Most of the doctors this week were involved in a storyline about separating conjoined twins, something that will pretty much never stop fascinating me. Having so many doctors in the same room allowed for a lot of interesting interactions – Webber (I still want to call him Chief) poached TWO major roles in the surgery from Karev through intimidation and later pity. It was kind of fun to see the Chief (calling him Webber didn’t last long) in this more cutthroat, villainous role. Even though I thought he was being a jerk, he was a jerk with a twinkle in his eye and I couldn’t completely hate him. Meanwhile, Lexie’s feelings for Sloane are becoming increasingly apparent, and Arizona drove everyone crazy with her overbearing neuroses during the surgery which led to some really cute banter with Callie afterwards. I still really love those two together. And Meredith was pulled out of the surgery to act as a buffer for Bailey, who didn’t want to have to talk about personal issues with Ben during the surgery.

Despite her and Meredith’s best efforts (and a little bit of drama involving a misplaced sponge), Bailey cracked and had to confront her issue with Ben – long story short, she’s finally agreed to move in with him. Or take baby steps towards moving in with him. In all honesty, I thought Ben was being too pushy. She does have a kid to consider, after all.

So, did you guys catch the episode? What did you think?