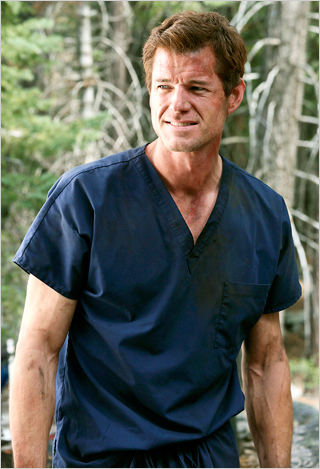 When I talked about what TV shows I’d be watching this year, I mentioned that I was on the fence about Grey’s Anatomy. Nostalgia is a big part of why I watch the show, and I can never seen to cut ties with it.

Yeah. Not much has changed there.

The season premiere picked up a month after the plane crash, and I feel rather cheated. They spent “like, a week” in the woods? (They did if Seattle Grace intern gossip is to be believed.) You don’t just throw something like that at us in the finale and then only vaguely discuss it in the season premiere. What happened? How did they get rescued? What did they eat? Why did they cut off Arizona’s leg? We better get some background on that one.

There are various repercussions. As mentioned, Arizona is now an amputee – and depressed. She won’t leave her bed, and so Callie cries a lot. Mark died. Lexie was already dead. Derek’s hand is numb. Meredith is mean and lonely, and the interns call her “Medusa”. Christina is in Minnesota.

I appreciated how the episode served as an obituary to Mark’s character as they neared the date and time when they’d have to take him off life support. That moment had an effect on everyone, and I especially liked how it revealed what Avery and Mark’s relationship had become.

I hated how long it took to find out what happened to Arizona. The way they made it seem like she had died, and the mystery, it wasn’t suspenseful. It just felt as though we were being toyed with. I also hated seeing April on a farm, dressed in the most cliche way possible. It just felt silly and an illogical move, but I’m at least glad that she’ll be returning to the hospital.

Introducing new characters in this episode was necessary, but at times felt invasive since we were also saying goodbye to characters. I didn’t like all of it, but I enjoyed seeing two actors I really like – Gaius Charles (Smash from Friday Night Lights) and Tina Majorino (Mac from Veronica Mars, a role on Big Love, other work…). There were some funny moments, too (Booty Call Bailey!) and overall I liked the episode, but I still have hesitations about this season. I still feel the series has gone on too long.

Karev couldn’t leave for John Hopkins knowing that his sick orphan program was being canned. Christina is miserable and it’s only a matter of time before she comes back too. So aren’t we almost entirely back to where we were before the plane crash, before the boards exams, etc? Yes. Minus a couple of character, we are. It might be time to take Grey’s Anatomy off life support.