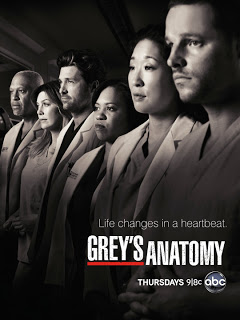 Is it lame if I start off yet another Grey’s Anatomy post by saying what a great season this has been? Seriously, Grey’s knocked my socks off once again last night. I was completely captivated, emotionally invested and moved by the episode. The plot sounds overdramatic – the doctors have to deal with the aftermath of a school shooting mere months after dealing with their own trauma – but it was so well done that it didn’t feel corny. The emotions in the show mirrored those from the haunting season six finale, but with much more uplifting results. Plus, Cristina is a doctor again.
Things started out simply enough. Meredith was mad that Derek wouldn’t give her any information other than “Cristina caught a fish and cried”, Arizona failed to win Callie back, Teddy married a guy so he could use her health insurance and Cristina told Owen that she was going to explore the city. On her way to the Space Needle she saw emergency vehicles go by and followed them. And that’s when it began.
A shooting had taken place at a local college and a lot of victims were being brought to Seattle Grace. Cristina, of course, was in one of the ambulances having intervened at the scene to crack a guy’s chest and save his life. She joined Teddy and Avery in the OR for surgery while everyone else dealt with the overload of patients.
Meredith and Derek worked on a professor who had fallen out of a fourth story window after leading many students to safety. He apparently had a phobia of hospitals and Meredith promised his anxious wife that she’d provide regular updates. Derek saw that as unnecessary and they fought, and Meredith revealed the final truth about the shooting – that she’d begged the gunman to shoot her instead of Derek. She knew what it felt like to be the wife in the waiting room. That’s what it had driven her to do. The explosive argument in the OR didn’t go on for long, though, and I’m guessing that’s because Derek knew Meredith was right. He was so busy looking out for Cristina that he overlooked what Meredith had gone through. Just because she wasn’t hiding under OR tables or bartending for a living didn’t mean she wasn’t in pain. 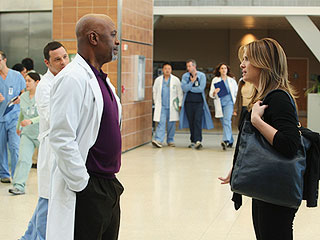 There were much more explosive arguments going on in other ORs, though. Karev and Stark were working on a 15-year-old girl with serious injuries while Arizona looked on from above, having been told by the Chief she couldn’t have her job back. Stark wanted to amputate the girl’s leg but Karev didn’t think it was necessary. Karev begged Arizona to do something, so she told him to block Stark from the patient while she ran to the Chief and got “privileges” to steal the patient away. She brought Callie along with her and they overrode Stark and saved the girl’s leg. It was a huge success, but it didn’t mean anything for Callie and Arizona. I think these characters belong together, and I think they will end up together, but I don’t think Callie will be ready to forgive Arizona for a while. Maybe not until February sweeps. 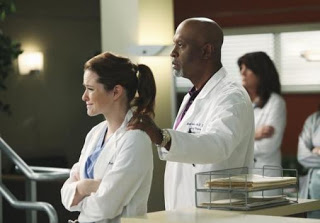 Meanwhile, April and the Chief were working on a young cop who was the only person who could provide an accurate description of the shooter. Unless he woke up, no one would know which of the patients was the dangerous maniac who caused everything. They woke the cop up and under intense pain he gave the description…of the guy that Cristina had saved.
This was the most captivating storyline of all. The idea that Cristina had finally snapped out of her PTSD and performed surgery again, only to perform it on the shooter himself? Gah! Beyond that, there was the morally gray area of whether to continue operating or not. Teddy was right – the doctors were not a judge or jury. They had taken an oath to save lives, and should stick to that oath no matter what. After all, what if the description of the shooter ended up being incorrect and the patient was actually a victim? You can’t take that risk. But at the same time, I understood where Avery was coming from – they were wasting valuable time and space on a person who had destroyed dozens of lives. I understood why Avery and the nurse walked out, and I may have even joined them if I were a doctor in that situation. But I respected Teddy and Cristina for staying.
The hospital ran out of ORs and Owen’s trauma training (and April’s talent for it) really came in handy, as they performed operations in makeshift curtained areas. One of the most moving scenes was when Bailey begged one of her patients, a kid named Chuck, not to die – and she called him Charles (and called god a bastard, which was kind of funny). It was a beautiful way of showing just how personal the school shooting was for everyone.
Another heartwrenching moment was when Alex explained to Avery the reasons for saving the shooter by using his own brother as an example. Considering the two guys’ history – Avery lost two of his best friends in the shooting, Alex treated April in a horrible way after finding out about his brother, and the two of them got into a fistfight – it was an extremely moving conversation. Things got even more emotional when we met the shooter’s mother. It was such a real moment that perfectly illustrated what Alex had said, and Avery showed his understanding when he gave the shooter’s mother an update on her son’s medical situation. As awful as the situation was for everyone, I can’t imagine what it would feel like to be that mother. That’s what was so great about this episode – it made me think about things like that. 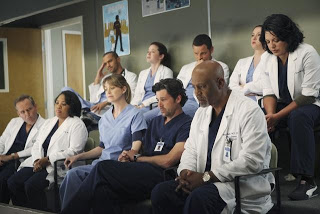 The scene where the college alma mater gathered outside the hospital with candles and sang was beautiful, especially the way it was interwoven with the medical scenes. Even though the episode was emotionally exhausting, it was also uplifting. All 26 victims were saved. As the doctors gathered to watch Cristina and Teddy save the shooter’s life and cried, then laughed, it felt like a very Grey’s moment. And then I loved when Stark walks out. I hope he quits.
This episode felt like it really wrapped up the shooting story arc. Not that trauma is ever really over, but this felt like as much of a conclusion as one can get. Cristina is a doctor again, she and Meredith are friends again. Meredith is trying to get pregnant. The closing scenes focused a lot on the docs’ love lives, and if that’s where the show is headed for the rest of the season, I’m OK with that.
What did you think of the episode? Does it feel like we’re moving on from the shooting now? Are you glad to have Cristina back? How long before Stark makes an exit?