Ally: So even though we are back from vacation, we had to call in a guest blogger. L-A is exhausted after a weekend spent at Halifax Crafters and Ally is exhausted from catching up on work all weekend. Real life problems. Thanks to Mel for attending a session at Sephora on our behalf to learn how to become even more beautiful…wait, why am I thanking her? WHY DID I GO ON VACATION?

Mel: Occasionally (ok all the time) being an unpaid staffer has its perks beyond Hilary Duff books.  While the ladies of FPQT were away soaking up the sun on vacay I was lucky enough to get to attend a little meet and greet with the fine folks from MAKEUP FOREVER on behalf of the blog.

Full disclaimer: I wear eyeliner and mascara everyday like it’s my job with the occasional dab of concealer when I remember. Aside from that? Make-up is terrifying to me.

Ok, that’s maybe a bit dramatic, but I never really got into make-up. My skin is kind of sensitive and so I just figure the less stuff I can put on it the better. That and mostly I’m just really lazy….

Anyway, the event was held at Sephora and I had the undivided attention of the wonderful PR rep and the make-up artist from MAKEUP FOREVER for well over an hour. During my session I was paired up with the lovely Latoya Perkins of the blog Beauty Obsessed (sidenote- girl knows her makeup).

We were introduced to the HD foundation line, which was designed for folks on HD film to have flawless skin. That’s like, industrial strength flawless we’re talking here. There’s a three-step process involved in the whole system- a primer, the foundation and a finishing powder. Initially when I tried it at the event it was pretty caked on which is a big leap from my au natural look. However, upon getting it home and playing around with it, I actually really dig the whole thing. Protip- mix it with your moisturizer for a nice, light, tinted moisturizer type effect for the summer (I learned good!). 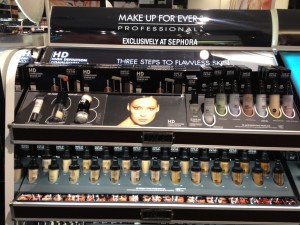 We were also introduced to the rest of the MAKEUP FOREVER product line. Fun fact, their Aqua line was developed for synchronized swimmers and they are the official sponsor of the 2012 Canadian synchronized swimming team. 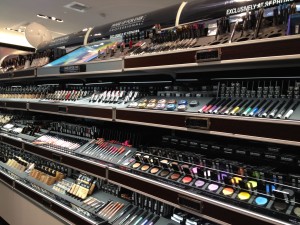 One of the other cool things is that all of their products can be used in combination and for multiple uses. Eyeliner can be used as lip liner, eye shadow as blush etc and also, the finishing powder for the HD foundation can be used as dry shampoo. Something else cool I learned is that one of their red lipstick shades was actually designed to be used at the actual Moulin Rouge in Paris. It is supposed to look good on all skin tones, although I did not try it as red lipstick and me = bad 80s hair band groupie. (Ally/Editors Note: This is a bad thing?!)

All told, it was a pretty informative afternoon and the folks from MAKEUP FOREVER are super friendly and passionate about what they do. 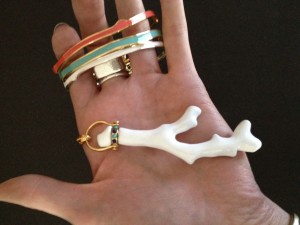