I wish this weren’t the way, but I just can’t watch everything. And one show that I almost never get to watch is Saturday Night Live. It’s the timing of it. In my time zone, it doesn’t come on until 12:30 a.m. If I’m awake at that hour on a Saturday night, I’m probably not home watching TV. If I am home at 12:30 on Saturday night (which I often am, considering I hate being out later than 1:00 a.m. It messes with my morning coffee and television routine) I’m usually in bed. Because I’m all kinds of lame. I often make it through the opening skit and the host’s monologue, and then I’m out.

Luckily, I have some very funny friends who are capable of staying up much later than me. So Allison Tweedie has done me the pleasure of writing a review of Saturday’s episode of SNL, hosted by the beautiful Helen Mirren. Without further ado, here’s Allison: 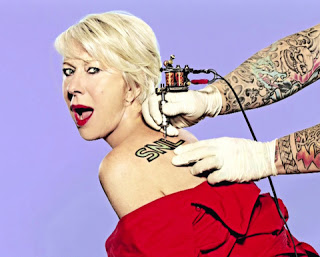 When I heard Helen Mirren was the guest host for SNL I thought it was a great choice. She is an accomplished actress that is synonymous with class and grace but has a wicked sense of humour. Have you seen her in the movie Red? She is not afraid to be silly.

Helen Mirren’s Magical Breasts
Ever since people saw the pictures of Helen Mirren in a bikini the world was stunned. In the words of Tina Fey, “What is she a wizard or something?” At 65 this woman is looking pretty damn good. So good it should be against science. Glad SNL addressed this by showing the magic behind her breasts. According to the skit, just touching her breasts sends you to a place of euphoria where you see monkeys, dolphins, and Brendon Fraser trying to laugh. That guy will never live that down. Also a brief cameo from Dave Grohl never hurts.
Celebrity Taxes
I believe this skit was only done once before. Andy Samberg is funny as the Mort Mort Fiengold the celebrity accountant but really the point is to display the casts’ impressions. New guy Paul Brittin had double duty playing both James Franco and Johnny Depp. His Johnny Depp is pretty dead on while James Franco is hilarious as a grinning idiot. Jay Pharoh is really good as Will Smith but that is the only time I see him on the show. Come on man, pick it up. The Kardashian impressions aren’t anything spectacular but any zingers going toward the sisters is good in my books. The best joke in the whole thing is when Mort Mort says he will place James Franco’s salary from hosting the Oscars under his Verizon bill because he “phoned it in.” ZING!
Perspective Photo Studios:
Does this really happen? Are guys really sending pictures of their junk to woman as a way of flirting? I hope this idea still belongs to the creepos, pervs, and peepers of our society. Beyond that, this was hilarious. Imagine the brainstorming session in the writers room, “What could a guy do to make his penis look bigger?” My favorite was, “Action shots.” It could work.
The Roosevelts
It was a good concept since The Kennedys is getting so much attention for using too much creative license. The girl on girl kiss was a little shocking; I mean Helen really went for it. This skit was a little sloppy and the timing was off. You could tell from the audience’s reaction to the topless Eleanor Roosevelt. It just wasn’t working. Kenan Thompson saved it for me with his portrayal of Teddy Roosevelt.
Mary Shelly
What a topical skit! Just kidding. This one was a bit of a snooze for me. It did remind me of the classic Phil Hartman Frankenstein’s monster character. “FIRE BAD!” Did the monster ever really say that phrase in the book?
Underground Festival
They have done these skits a few times now and as always it is an example of how random humour is a good go-to tactic. I look forward to these sketches for one thing: Ass Dan and his always untimely death. My roommate is very sweet and actually sad, “That’s so sad, he died.” I don’t think she understood that it was a comedy sketch. Out of all the things that were described the thing I would be intrigued to see is a comedy show by the Menendez brothers.
Strip Show
This skit was a little predictable and makes sense that it was left as the last sketch of the night. Strip club + guest host Helen Mirren = Old lady stripper. Jason Sudekus seemed like he was breaking a little bit. I couldn’t tell if it was because he found what he was saying funny or it was the audiences’ underwhelming laughter. Oh, and a cameo from Dave Grohl never hurts.
Overall Helen Mirren did a good job and took what ever the writers gave her.

I went and watched the “Celebrity Taxes” sketch on the Global TV website because I thought it sounded funny. Like Allison, I didn’t love the Kardashian impressions. I’ve seen actors on SNL impersonate a Kardashian or two before, and I really think they need to retool their material. Trust me, as someone who constantly gets sucked in by the various Kourtney/Kim/Khloe/Krazy “take” something shows – there is a plethora of things to make fun of with these people, but high-pitched nasal voices are not one of them. They don’t sound like that.

I wish SNL would make better use of Jay Pharoah. The guy is hilarious but it seems like whenever I tune in he’s barely on the show. He does a way better Barack Obama impression than Fred Armisen, who I’ve always found to be kind of overrated.