Halifax Burger Week is now over for another year, and the city is stuffed to the brim with the thousands of burgers that have been consumed. With beef, chicken, fish, veggie, sausage, lamb, boar, and even kangaroo available as options this year, the choices were abundant and I think it’s safe to say that Haligonians were very satisfied with the turnout!

Delicious sauces and pasta (both deep-fried and not) seemed to be some popular topping choices this year, and a lot of the 95+ restaurants really stepped up with some amazing, original burger compositions.

This was easily the hardest year I’ve had thus far trying to decide my favourite burgers of the week. I got to try 31 of the options this year (12 previews and 19 during the week) and I kept going back and changing my choices for both the Top 3 as well as the 10 Honourable Mentions. There were many burgers that got left off this list that I really enjoyed, but there just wasn’t enough spots for them all. Basically, what I’m trying to say is Halifax knocked it out of the park for Burger Week 2017! 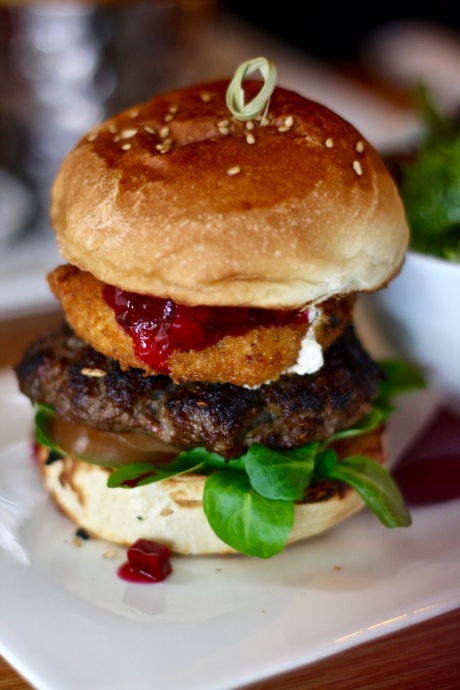 “The spiced lamb from Oulton’s is seasoned perfectly, and the flavours that come through are a delight. The beet relish was something I was unsure about going in to this burger, mostly because I have never really been a fan of beets, but surprisingly I really enjoyed the subtle sweetness that is brought to the burger and how well it worked with the lamb.

The component that takes this burger from good to great is the brick of fried goat cheese. Not only is the goat cheese on its own delicious, but then they give it a crunchy outer coating by frying it, and making it that much more amazing.”

I was a big fan of the molé chicken burger that Primal came up with last year, and I was even more impressed with the amazing Smoked Wild Boar Burger that they served up this year!

All the meat in this burger was seasoned perfectly, and the flavour that comes through is next level. The house-smoked cheddar gave it a really strong boost that I really enjoyed alongside the boar. The chipotle BBQ sauce gave the burger a good kick, and along with the tangy and crunchy beer-naise slaw, it really tied the whole dish together. The team at Primal should be pretty proud about this one!

“For their burger, they have created a chicken and mushroom patty that is unlike any burger I have had before. It is a delicious, savoury patty, that has a lighter feel than a typical beef one. The duck fat tomato relish brightened up the burger with its freshness, and there was also a nice mild flavour from the duck.

I was a big fan of the sesame-orange daikon slaw. It had a really great mild and tangy flavour, and it was so crisp which added to the overall texture of the burger. Throw everything on a nicely toasted sesame seed bun and you had a truly unique option for Burger Week!” 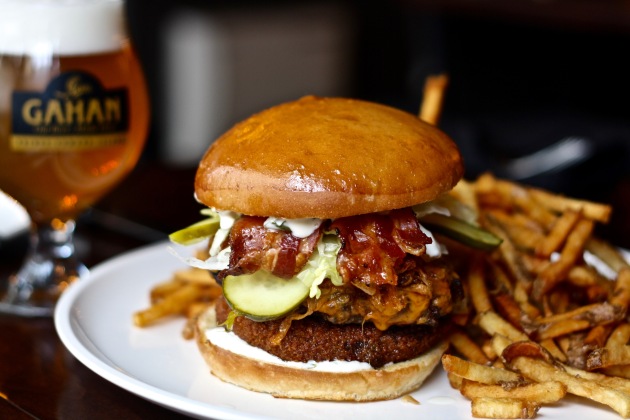 “While there are a lot of great things about this burger, it should come as no surprise that that star of this show is that stout braised beef croquette. With a crunchy exterior, and a meaty and flavourful interior, this unique addition gives this burger a bit of flair, while still maintaining a high-end feel.” 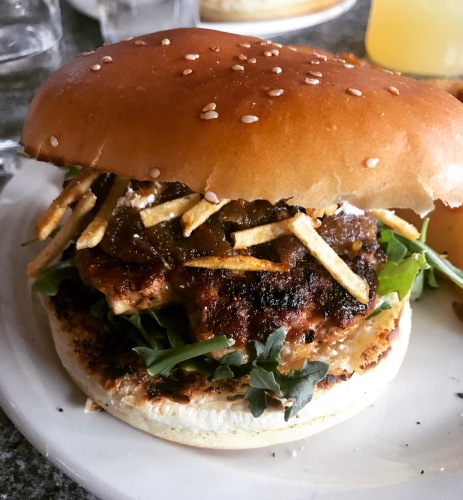 Harissa-spiced pork was the base for this burger that pulled out all the stops when it came to creating a very unique flavour. The date and bacon jam was super sweet, and I was actually a fan of the whipped smoked feta, which says something because feta usually falls near the bottom of my favourite cheeses list. Throw in some hickory sticks for a solid crunch, and you have the makings of a good time! 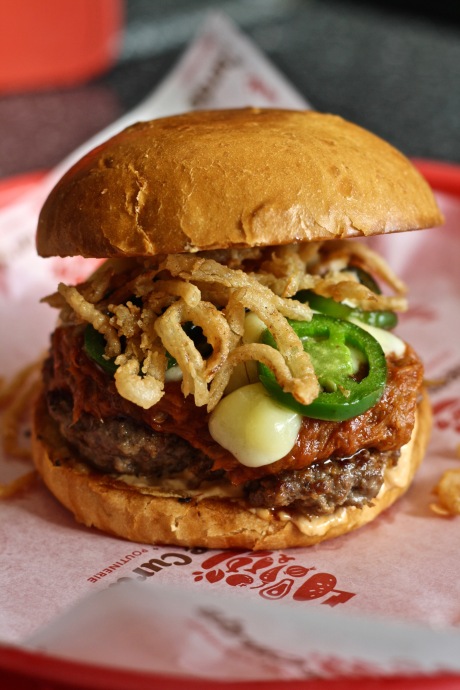 “With a regular menu that is full of big and creative burgers, it should be no surprise that Cheese Curds didn’t hold back for their Burger Week entry. Sitting on a tasty brioche bun, this is a meaty burger that is packing some heat. There is tons of pulled pork sitting on the beef patty, which does get a bit messy, but it is definitely worth it. There is a lot of sauce happening on this burger (the sweet BBQ sauce works great with the jalapeños), and it is countered by a great crunch from the crispy onions.”

“After the first bite, it was clear that my assumptions were spot on. Not only does this burger have a great beef patty (made with local beef), it also has a generous serving of tender pulled lamb, which gives the burger a nice, mild flavour that I really liked with the stronger cheddar. The garlic truffle aioli was subtle, but there were a few bites were it really stood out with that beautiful roasted garlic flavour.”

The Local – The Derby Chuck 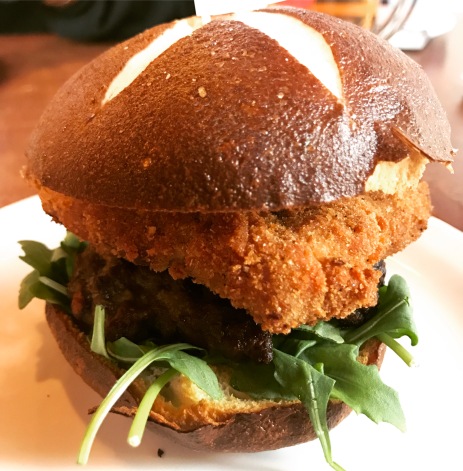 A surprise favourite from last year, The Local brought their A-game again, and it’s safe to say they impressed a lot of people with their creativeness this year. With a delicious bacon jam-infused patty and one of the best pretzel buns in town (from Stone Hearth bakery), The Derby Chuck already had the makings of a great burger, but they didn’t stop there. Sitting proudly on top of the patty was a deep-fried brick of gravy which, after the first bite, oozed dark, savoury gravy all over the burger, and in turn set this burger apart from the rest!

It wouldn’t be Halifax Burger Week without a few burgers that were a bit more elegant than the others, and Lot Six definitely offered a burger that was dressed to the nines. The very tender meat is a braised short rib and it is smothered in a very generous portion of melted Oka cheese. The candied double-smoked bacon was that great combination of sweet and salty, and was mirrored by the bold, yet sweet, maple BBQ sauce. Throw in a bit of radicchio to give it a crisp crunch, and you have a beautiful burger that doesn’t mess around.

“The thing that makes this burger for me is the special sauce. They did a great job of making a sauce that is reminiscent of the real thing, but when combined with their signature house-made relish, it gives a huge burst of flavour to the burger and I just couldn’t get enough!” 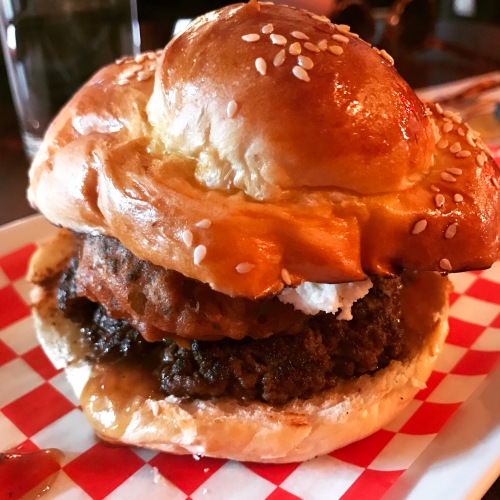 This one was a pretty big hit with the majority of people that tried it, and rightfully so. A juicy beef patty sat on my favourite bun of the week, which was incredibly soft, and was dressed with dragon’s breath blue cheese and a bit of garlic aioli. Where this burger really won me over though, was the Propellor root beer reduction. This very sweet addition quickly grew on me, and I loved how it interacted with the beef, and it was a nice break from all of the more savoury burgers I had already consumed! 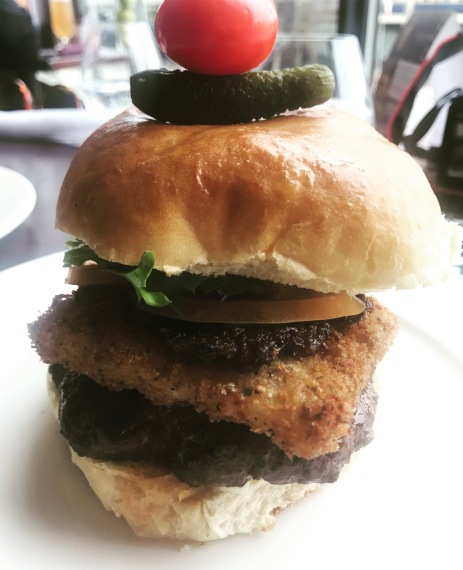 Pasta on a burger doesn’t sound like it should work, but Burger Week 2017 has proved that it surprisingly does (when cooked the right way). At Seasons Bistro, they created a crispy mac ‘n’ cheese, with a subtle jalapeño component, that all kinds of awesome. The Oulton’s Valley-raised beef created a delicious and juicy patty, and I absolutely loved the sweet and savoury bacon jam, a condiment that is quickly gaining a lot of love from both myself and other burger fans.

Halifax’s busiest corner for the post-bar crowd is easily Pizza Corner, which has pretty much everything a person who has had a few drinks could want. While the businesses that live on this corner have changed a few times in recent years (including some non-pizza places popping up), there is still a good selection of greasy food, and Tempo has taken all the best parts of PC and made them into one great burger.

A patty made of donair meat is the base for this one, and there was a perfect amount of classic donair sauce, which gave you that unique taste without drowning everything in the stuff. The garlic finger bun was slightly crunchy, but was balanced out with a nice layer of melted cheese. Topped off with a piece of house-made pepperoni, this burger won me over and quickly earned its spot on this list!

That’s a wrap on Halifax Burger Week 2017, and it’s definitely one for the books. The event satisfied a lot of burger-hungry Haligonians and in turn managed to raise $70,655 for Feed Nova Scotia, which will help out a HUGE number of people in the province! Now to count down the days till next year!