Halifax Burger Week is in full swing and it was time to venture out into the city for Day #3! Joining Team Life of Burgers this time was Olivia, Savannah, Jordan, Nadine, and Elaine. 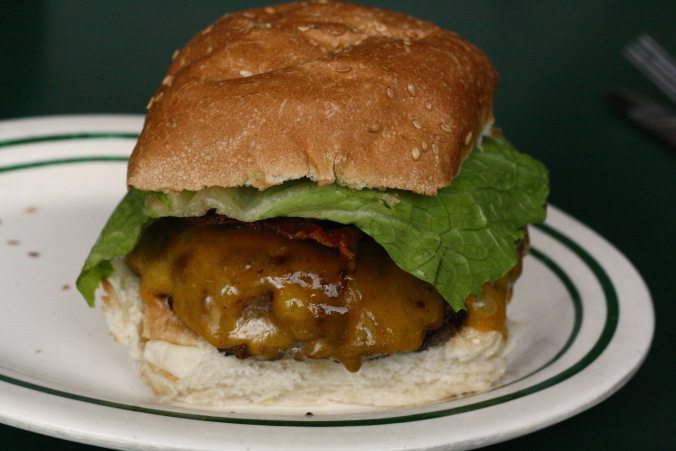 The Peanut Butter Burger from Darrell’s is a regular menu item and it is hugely popular within Halifax. I, however, have never been a huge fan of it. Not that there is necessarily anything wrong with it, I just don’t really enjoy the combination of peanut butter with their patty. I do, however, think that their patty is pretty good (I’ve had other burgers that use the same patty). With this burger, I also really enjoyed the bun, and it was able to hold up when faced with the peanut butter and burger juices that this burger provides. This burger seems to have a pretty big fan base, so if you think it is something you would like, you should definitely try it and form your own opinion.

Savannah: “I really liked the peanut butter as it wasn’t too sweet, and it worked well with the bacon” 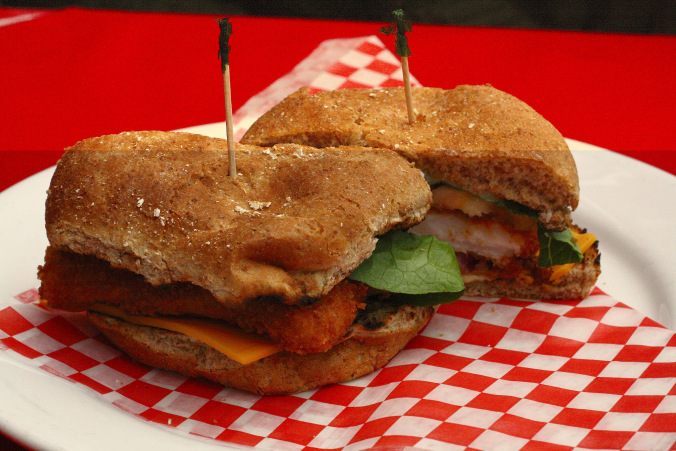 I’m not a huge fan of fish, but being the dedicated Ambassador that I am, I knew I had to give the Crispy Panko Haddock Burger a try. I’m glad I did because I was pleasantly surprised. I thought that the fish was cooked really well, and I really liked the panko crust. I also liked how the remoulade had a nice complimentary taste to the fish. My major complaint with this burger was the cheese. The cheddar kind of tasted weird with the fish, and it was just a solid slice of cheese, which gave an off-putting texture. Being one of the few fish burgers available for the week, this is definitely worth a try, especially if you are a fish lover. 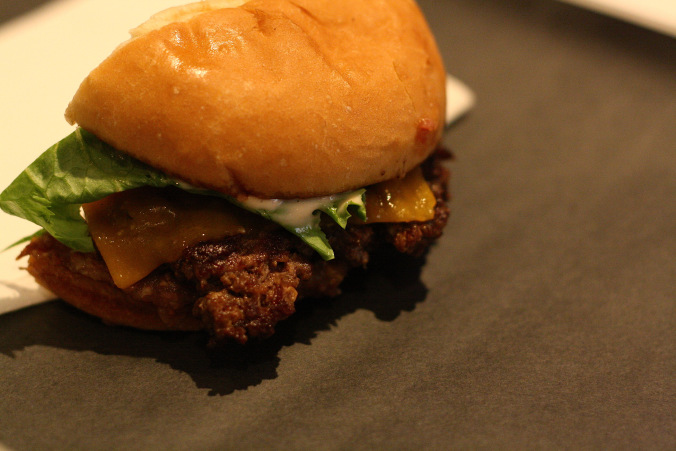 While a lot of burgers are creating big and unique burger creations for the week (a lot of which are awesome), Krave kept it simple with their Bacon Jam Cheeseburger. It may have been simple in terms of what it contained, but it certainly wasn’t simple when it came to taste. The star of the show was the bacon jam, which was super delicious! The patty was cooked perfectly, and it had a really nice char to it which added a great taste. The bun was super soft, and it was the perfect housing for a burger of this size. Lastly, their Krave sauce is full of flavour, and it helps take the burger to the next level. This burger should be on your ‘must try’ list for Burger Week! 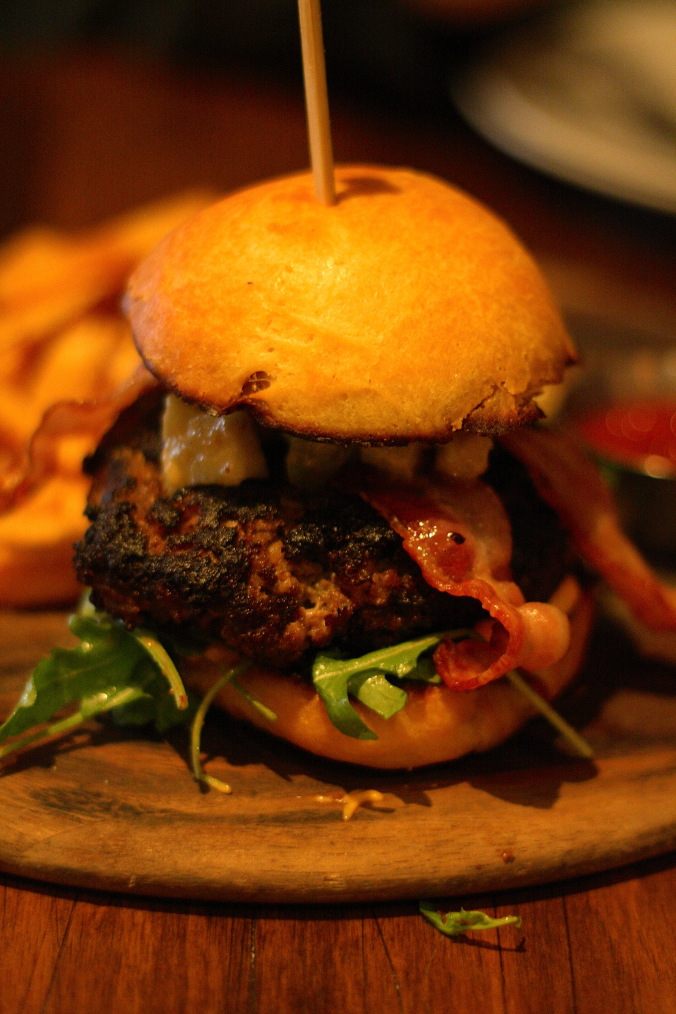 The beef used in this burger was really great (and I’m not just saying that cause I’m from Prince Edward Island). It was juicy, and seasoned perfectly, and the charred outside added a really nice flavour and texture. The toasted bun, while a bit small for this burger, was soft and fresh, while still having a bit of a crunch. My favourite part of the burger was the pine nut relish, as it added a really great sweet component to the burger. This burger was one of my favourites of the day, and it is definitely worth a try. 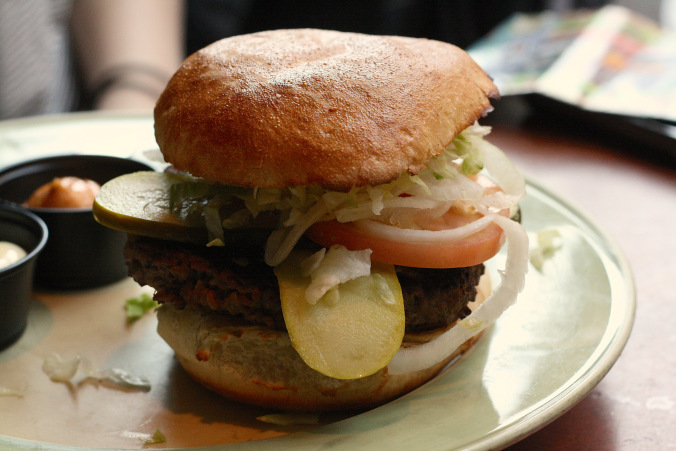 The Original Burger from Your Father’s Moustache is another regular menu burger, and it is pretty simplistic in terms of construction. The patty had a very classic burger taste, which was very simple but not necessarily bad. The bun was toasted and it had a great taste. I would have liked to have seen a bit more flavour in this burger, but it is still a pretty decent take on the classic burger setup. 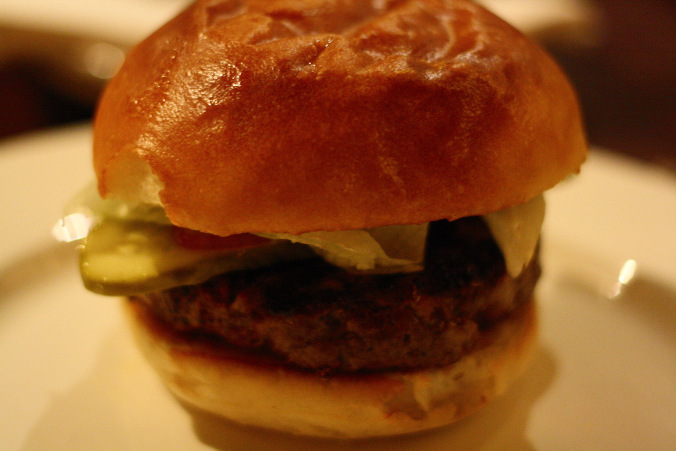 Continuing with the theme of simplicity, is the Rockbottom Burger from Rockbottom. The patty was cooked well and was full of juices. The bun was soft and fluffy, and it fit the burger patty really well. I did find that the onions were a bit overpowering, and this burger definitely could have used less of them. Overall, this was another decent ‘classic burger’ creation.

Olivia: “I really liked how simple it was” 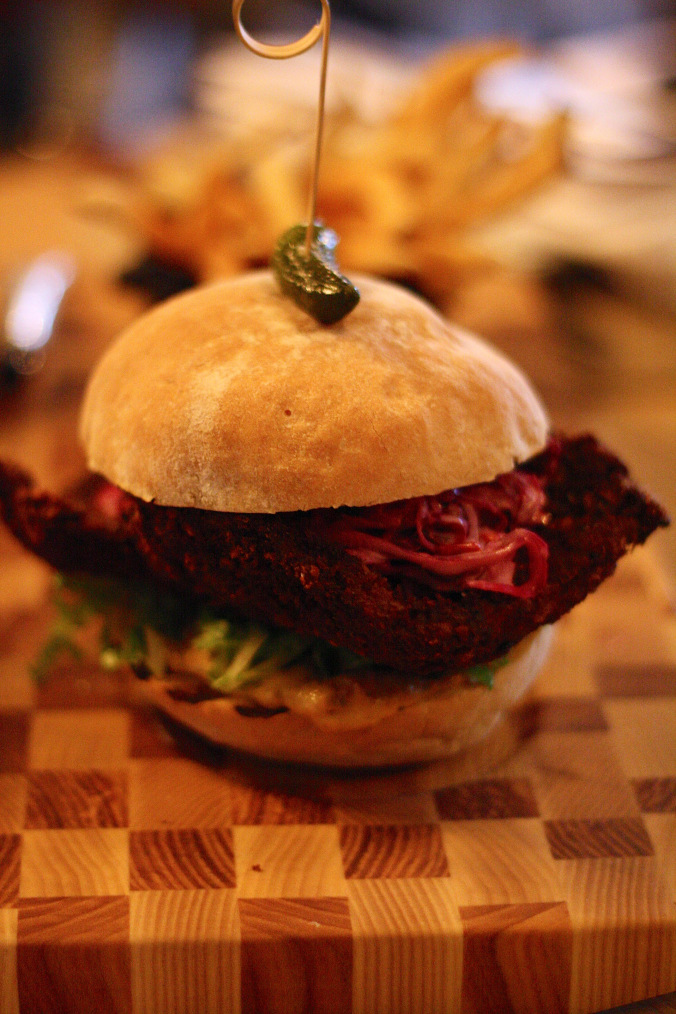 Switching it up from beef to chicken, our next stop was for the Molé Chicken Burger from Fiasco. After the first bite, I could already pick out a bunch of great things about this burger. The outside of the chicken was crunchy, but the inside was super tender. I loved the use of the aioli, and the red cabbage worked perfectly with the chicken. The flavour from the corn slaw was subtle, but still a welcome addition. This was all around a pretty awesome burger! 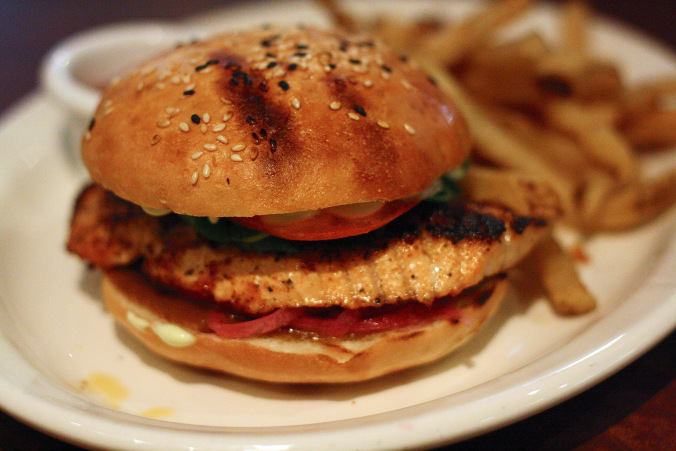 Admittedly, I am not a fan of salmon, but this Ambassador doesn’t turn his back on a burger. Since I am pretty biased against this type of fish, I asked the Life of Burgers team to provide some input.

Elaine: “The salmon was well seasoned. I thought the pea sprouts were a nice touch, and the pickled onions added a nice acidity to the burger”

Savannah: “I really liked the miso. It reminded me of eating sushi”

Olivia: “I really liked the flavour that the pickled onions added to the burger” 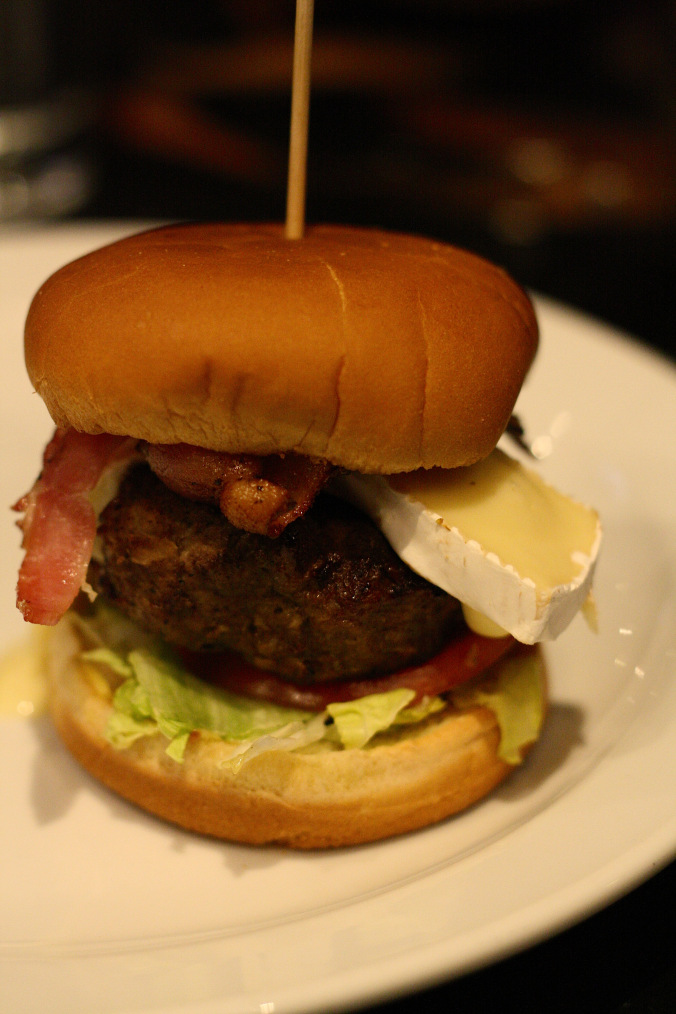 For the last stop of the day, we went to the super busy Fickle Frog for their burger. The major highlight of this burger for me was the brie. It tasted great, and there was a lot on the burger. The patty itself tasted great, and was cooked almost perfectly. The bun did a great job of holding everything together, including the generous amount of bacon. I was a big fan of the curry aioli as it gave the burger a bit of a controlled ‘kick’. This burger was a nice end to a very meaty day.