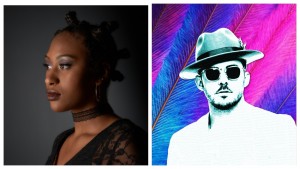 Located at The Rotary Stage, near Bishop’s Landing on the Halifax Waterfront, the Marquee Music Stage will have performances Saturday Aug 3rd from 12:00 PM – 8:30 PM and Sunday August 4th​ and from 1:00 –4:30. See buskers.ca for detailed scheduling information.

Topkat Amazona is a DJ / Producer who hails from the Amazona Soundstation which has been one of Atlantic Canada’s leading Caribbean music Sound Systems for the past 10 years. Currently, Topkat as he is popularly known is based in Halifax, Nova Scotia and Toronto, Ontario.​ He has played and promoted at a variety of Caribbean Music and Urban Venues throughout the UK, Germany, South America the USA and Atlantic Canada since 2009. ​ He has worked with and hosted for acts for artiste such as; Beenie Man, Walshy Fire, Thugli, Dj Charlie B, Serani, Gyptian, Elephant Man, Mobb Deep, Ski Beats, Rayvon, Sugarbear, August Alsina, YG 400, Lindo P, South Rakkas Crew, JRDN, Lil Kim, Mya, Director X and Belly to name a few.

Harmony Adesola, aka HARMZ, is an 18-year-old upcoming Canadian Hip Hop Artist who bases his music on his life experiences. HARMZ has teamed up with Canadian Hip Hop producer A-Thursy, creating his first mixtape Harmony: Remastered. His major breakthrough came when he performed at the 2018 ECMA Festival after placing 1st in the TD Music Moves Me Contest. He was also chosen as to be in Halifax Black Film Festival’s film making program, Being Black in Halifax. He created his first short documentary on the underage Hip Hop scene in Halifax, which was screened to a full house at Cineplex in Halifax. He is looking forward to the screening of his film at the Montreal International Black Film Festival in September. He will be on stage during The Halifax Black Summer Festival with some of the province’s most sought-after hip-hop artists, who despite their age, are taking the scene by storm!

This 18-year-old award winning quadruple threat (writer, producer, arranger, vocalist) is impacting the East Coast music scene while still in high school!​ Zamani’s unique musical style reflects a variety of eclectic musical exposures. Folding inspiration from divas past and present such as India Arie, Erykah Badu, Nina Simone, Natalie Cole, Lalah Hathaway, Mariah Carey and Beyonce, Zamani has found a voice all her own, as she skillfully delivers up her own brand of R&B, Soul, Urban Jazz and Pop. In 2018 she was named recipient of the ANSMA Portia White Youth Music Award as well as the Jongleur Youth Arts Performance Award. In 2019 she won the ANSMA Emerging Artist of the Year Award. Recently, she was featured on the cover of Coast Magazine where she was dubbed an R&B legacy and rising star. This fall Zamani will release her debut EP and music video.

Reeny Smith is a powerhouse on the stage and in the studio.​ A songwriter, musician and producer, Reeny delivers magic every time she hits the stage.​ Her extraordinary vocals, confident presence and energetic live show make for a truly unforgettable, entertainment experience.​ Accolades for her talents are piling up. At this year’s East Coast Music Awards in Charlottetown, Reeny’s stunning performance at the Awards Show brought her a standing ovation topped off with two trips to the podium to take home a pair of trophies.​ She was also named to the Top 10 of CBC’s national Searchlight. Her first full-length album,WWIII:​ Strength Courage Love was released in 2018 and her song-writing took her to Germany and Japan.​ She’s collaborated with artists like Quake Matthews and opened for Anderson Paak, but through it all, Smith says the thing she’s the proudest of is developing her craft as a songwriter and being recognized for the hard work she’s put into the depth and realism of her work.

Jeremiah is a force on stage. A life-long singer and pianist, his roots are firmly planted in the church community of Cherrybrook, NS. He spent a few years as choir director for the critically acclaimed Nova Scotia Mass Choir before moving from singing to acting, his first major role being Mufasa in the Toronto production of Disney’s The Lion King. Since then he has performed across the country in many memorable roles including Louis Armstrong (Satchmo Suite). He was a member of the Stratford Shakespeare Festival Company and the resident company of The National Arts Centre. He is a major performer in the world renown production of Drum. Jeremiah also performed as the lead role in a play for the Biyimba​ International Arts Festival in Uganda Africa. He has many film and voice over credits. He recently finished 2 seasons as an actor with the Shaw Festival and wowed audiences in the Canadian premier of Color Purple with Neptune Theater.

Christine Campbell’s latest album Roller Coaster, is a true representation of her diverse influences- from hard rock to 70’s rock to roots and blues. Christine has added top-calibre artists like Jeff Burrows from The Tea Party to add their musical talent to the songs. And classifieds co-writing and co-production pumps it up even more. Roller Coaster offers a narrative of a small town girl who has become a powerful performer, known for her mastery of guitar, piano and killer rock vocals

Blake Johnston is a singer, songwriter, and guitarist based in Halifax Nova Scotia.​ Born in Mt. Uniacke, a small town outside of Halifax. By the age of​ 13 he had already started playing parties and bars in cover bands at 16. At age 19 he began putting together what would eventually become his debut original rock band The Stogies. In their travels the Stogies have shared the stage with The Stanfields, Wintersleep, Gloryhound, Jessie Brown and The Black Divine, The Mahones, Steven Page, and The Long Distance Runners to name a few

In 2013 Blake was recruited by up and coming rock queen Christine Campbell. Blake has since backed up Ms. Campbell, written songs for and played guitar on Christine’s solo album. With The Christine Campbell band, he has opened for Bob Seger, Lou Gramm (the voice of Foreigner), The Kentucky Headhunters, Rick Derringer, Matt Minglewood, and Monster Truck.

Fresh off an album release with the group Party Boots (‘House Party’), Rankin is preparing to launch and is right back in the studio, hammering out his debut solo album. Already a proven stage performer, Rankin lead the group Party Boots through 7 years of non-stop, energy-packed performances and his diversity had him collaborating with greats from the White Stripes to the Chieftains. Being backed by a band of talented friends on saxophones, fiddles and all the rest, Rankin is equipped and ready to hit it… 4-3-2-1!