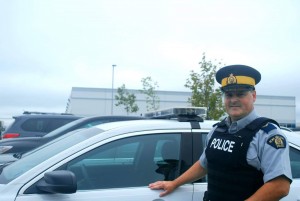 II am really looking forward to sharing the great work being done by Halifax District RCMP employees as a media relations officer,” says Cpl. Hutchinson. “My family and I have enjoyed numerous positive experiences since I enrolled in the Force, and I’m certain this new role in a new District will allow that to continue.”

Cpl Hutchinson joined the RCMP in 2005 after having worked as a youth worker in Pictou and Colchester Counties. His initial posting in the RCMP was in Saskatchewan, at the St. Walburg and Glaslyn Detachments. Two years later, he returned to Nova Scotia where he was posted to Parrsboro Detachment for two-and-a-half years, then he spent three years as the Community Policing Officer in Cumberland District, where he had an opportunity to work with the media on a regular basis. Cpl. Hutchinson then transferred back to General Duty policing in Colchester District, where he has spent the last three-and-a-half years.