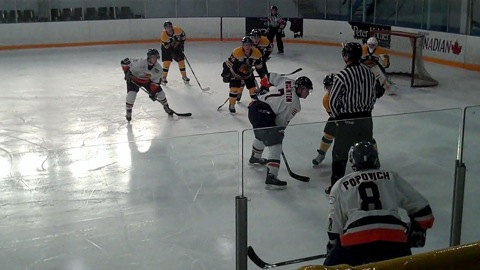 Undefeated Woodstock Visits the Forum Thursday Night
The MJAHL Halifax Lions have been pretty happy with themselves and their play over the last month. Since starting the season with 3 straight losses, the Lions had been 10-7-2 with a 4 game winning streak before being dismantled last week at home in a 9-2 loss to Summerside.
The Lions looked like a team that had grown a little too confident and it showed in their lacklustre play. The Capitals came in aggressive and hungry and led the game from start to finish winning in a rout.
A similar performance vs. the undefeated Woodstock Slammers this week, and the Lions could lose by double digits.
There will be no room for error for Coach Troy Ryan and his troops. However they should have some confidence heading into the highly anticipated match up. The last time Woodstock came to Halifax, the Lions took them to overtime before losing on a goal by Slammer’s star player Brogan Bailey.
This was before the addition of high scoring Brendan Taylor, when the team was struggling to score goals. With Taylor, the newly acquired Brad MacDonald, and the return of Stephen Woodworth and Mike Rofsky, the Lions can score in bunches. The only issue heading into Thursday is which team will show up; the Lions who won 4 games in a row at the start of the month, or the team that looked lethargic and disinterested last week vs. Summerside.
Lion’s fans hope it’s the former.
Game time is Thursday night at 7:00 at the Forum on Windsor Street.
Slammers to Watch
# 21 Brogan Bailey– 20 Goals and 18 Assists
# 11 Michael Best– 19 Goals and 18 Assists
#26 Andrew Langan– 16 Goals and 21 Assists
The Slammers have 8 players with point totals well above the Lion’s leading scorer (Travis Perry, 19 pts), including 6’4” defenseman Brad Tesnick who has 27……. Brad’s younger brother, Ryan, may be the best prospect on the team. The 16 year old has 14 points on the season and can really fly…….The Slammers are 26-0 with 1 shootout loss. They are currently ranked 8th in the country. The Slammers got a scare last Thursday. Troy Ryan’s former team the Pictou Crushers took the Slammers to OT before eventually faltering in their upset bid.
Troy Ryan hopes to have everyone back on the same page for the game. There was a notable lack of effort by several key players vs. Summerside…….Travis Perry continues to lead the Lions in scoring with 19 points. Robbie Veriker and Wayne Bedecki have 15. Kyle Dilosa is coming up fast on the leaders with 8 goals and 6 assists. Brendan Taylor has 10 points in 6 games…….16 year old Stephen Woodworth is back with the Lions after a couple weeks with Lewiston in the QMJHL. Woodworth is paired up once again with the veteran Kyle Mariani. Brad Macdonald, the brother of John, has joined the team and Coach Ryan has the pair on a line with Stuart Lenihan. The brothers Macdonald look appear to have played allot of hockey together over the years to say the least. The Lions are 2 points behind Amherst for last place in the Maurice Bent division with a record of 10-11-2.