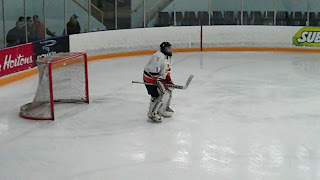 Summerside Rolls Over Halifax at the Forum
Lion’s 4 Game Winning Streak Snapped in Rout
That loud thud you heard last night on Windsor Street was nothing to be alarmed about. Unless you’re a Halifax Lions fan.
It was simply the sound of the Lions crashing back to earth after getting soundly whipped at the Halifax Forum 9-2 by the visiting Summerside Western Capitals.
The loss snapped the Lions 4 game winning streak and dropped them to 10-11-1 on the season, 5 days after they climbed to .500 and matched the previous year’s win total with a resounding 6-2 victory over the rival Bridgewater Lumberjacks. The Lions had outscored their opponents 26-8 during the streak and had won their games at the Forum in an eerily easy fashion.
It was role reversal by classic definition last night as Summerside cruised to victory after scoring the game’s first four goals. Goaltender Paul Dorsey stopped 53 Lions shots on route to garnering the game’s second star (although in the press box everyone agreed 53 shots was a highly inflated total). Steven Brazil led the Capitals attack with 2 goals and 1 assist. Brazil also gave a Sean Avery type performance, getting under the skin of several Lions with questionable antics that drew the ire of his opponents while firing up his teammates.
In one notable example, Brazil skated by the Lion’s bench and gave an elbow to Wayne Bedecki as he stood watching the game. Brazil’s actions led the way to a series of altercations that should make for an interesting rematch when the 2 teams hook up tomorrow night in Summerside.
The Capitals improve to 15-11 on the season, good for 3rd place in the Meek Division. The Lions remain in the basement of the Bent Division, 1 point behind Yarmouth and Amherst.
Brad Macdonald and Stuart Lenehan scored goals for Halifax.
The Lions next home game is Thursday, December 17 vs. the Woodstock Slammers. The Slammers are ranked nationally and still undefeated after a shootout victory last night in Pictou. Game time is 7:00 at the Halifax Forum.