The goal of the Halifax Nacho Quest is to discover the best nachos in the city. A group of 6-10 participants embark on a pub-crawl-like adventure, tackling one street at a time, and seeking out nachos wherever they may be.

We’ve covered downtown so now it is time to check out the far north and south ends of the city. The south end has proven difficult. There are not a lot of bars/restaurants in the south end. There are, of course, the university pubs but it turns out these are not open on weekends. Huh. I remember my weekends in university being pretty important so I’m not sure what’s up with that.

So we ended up doing 5 places on Sunday and 3 places on Monday.

Questers: Halifax ReTales, Halifax Wingman, The Side Dishhh, Travel Yourself and Leah.

Since I was short two questers on Monday, I averaged the scores to create two additional scores. I realize this is not ideal but I’m confident with the results of this quest.

Longtime readers may realize that we have done The Henry House and Mexi’s on previous quests. I saw this quest as an opportunity to revisit some high ranking/controversial nachos. 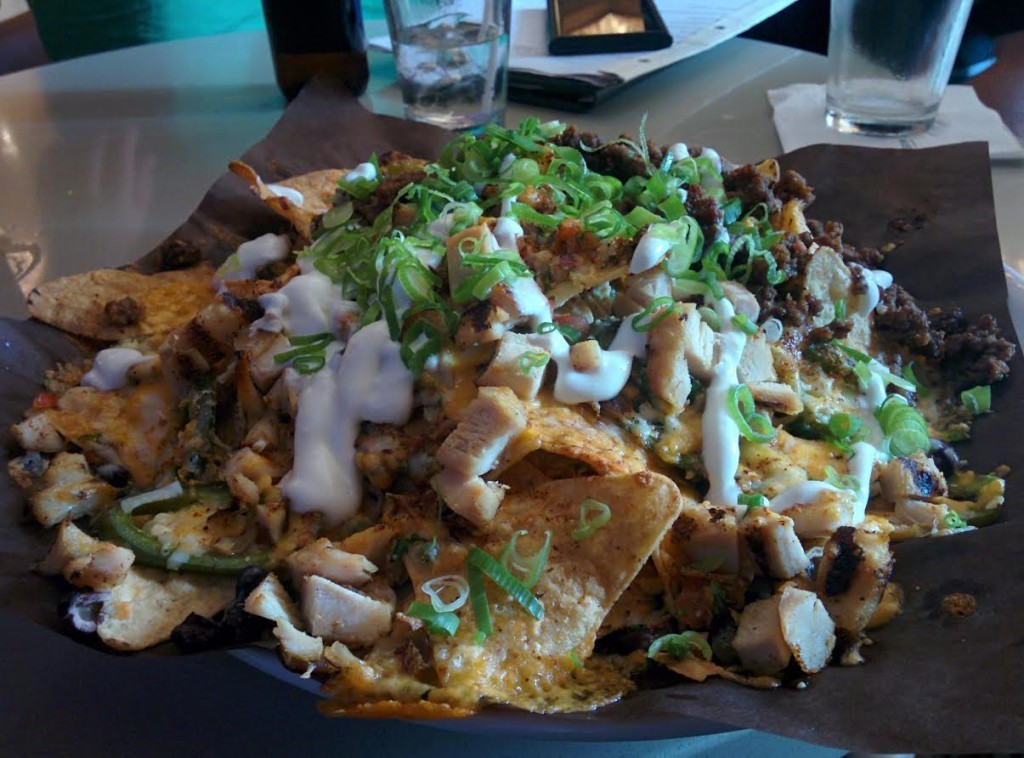 “A nice plate of nachos on top of a pile of broken nonsense.” – Halifax ReTales

Roy’s is a small hotel/cocktail bar in the Westin that isn’t exactly on the locals’ radar. However, it was named after a bartender (Roy, of course) who has been mixing cocktails in the hotel since 1963. Legendary stuff.

The web site lists two different menus each with a different nacho description. We were only offered one menu, and the nachos were presented with black beans, pico de gallo, green onion, sour cream and jalapeno.

There was no salsa or sour cream for dipping as these were placed on as toppings. We liked the drizzled sour cream but would have liked more for dipping. Meanwhile, pico de gallo, as a topping, is hard to differentiate from plain ‘ol tomatoes and onions. In other words, it doesn’t replace the need for salsa – a component we felt was missing.

These nachos looked good hitting the table and had some nice flavours, but there wasn’t enough cheese to warrant the price. At $6 the chicken and beef are not worth it either. 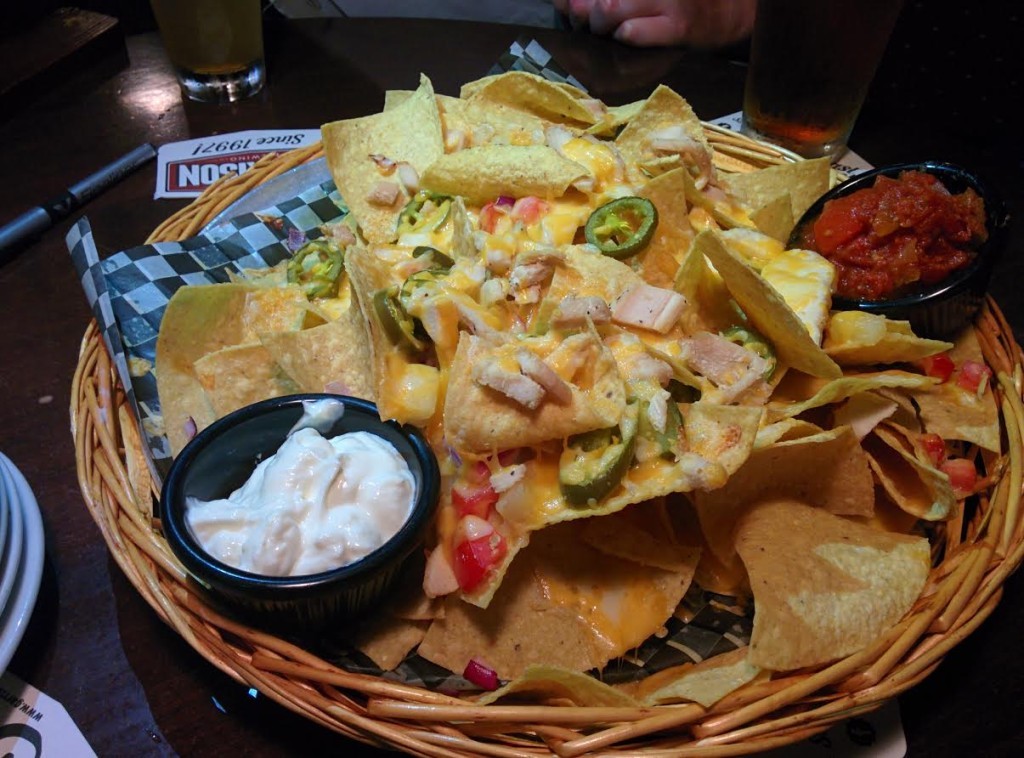 We originally covered The Henry House on the Barrington St. Quest. They scored 2nd place but seemed to hold so much more potential. It made sense to revisit them on this quest to see whether the batch we had was typical.

Unfortunately, these were worse than the nachos of 2015.

We encountered the same issue with cheese coverage (bare chips on top) but there also seemed to be less chips (which is obvious if you compare the pictures). There was also a serious lack of pineapple.

What we really loved about these last time was the sharp cheddar cheese, which on this occasion was muted within a cheese blend.

The sour cream was nice and thick. The salsa was house-made but sweet.

These just weren’t all that flavourful or plentiful – which sucks, because I like the Henry House. 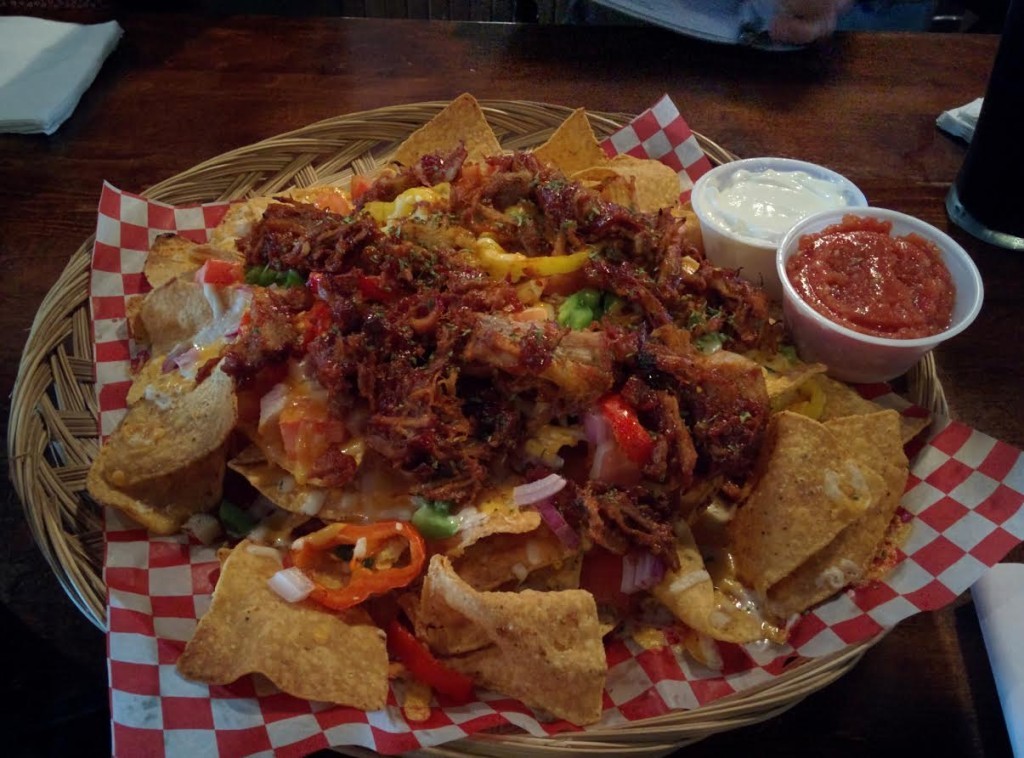 “I will never utter the words ‘let’s go to Bearly’s for nachos’.” – Halifax ReTales

Pulled pork was the only protein option at Bearly’s so we went with that. It was a hefty portion, and a good value for $3 … if you dig it. Most of us thought it was sweet, dry and overbearing.

Opinions were split about whether there was enough cheese, but we couldn’t secure a verdict because it was buried under all that pulled pork!

The house-made salsa was dense and laced with cilantro. It was our 3rd favourite salsa of the day.

The pulled pork ruined these for me, but I’m not convinced I’d be raving about them anyway. 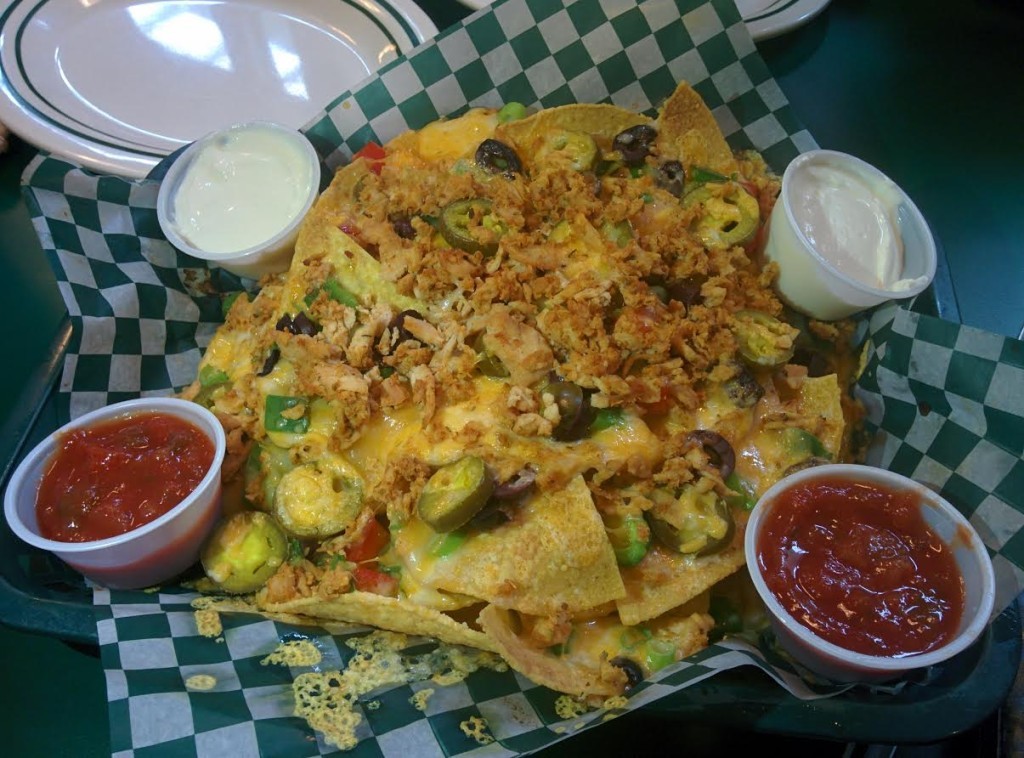 “Cheese –o- meter is high. Lots of toppings. Toppings for everyone! Possibly (my fav) because others were meh.” – Cailin

So far all of the south end nachos had been pretty disappointing. Then Darrell’s gives us this cheap plastic basket with generic salsa and what I can only describe as “taco chicken” – like they took some mutilated chicken and fried it up in taco spices like it was ground beef. I wasn’t sure about it.

The chicken was actually pretty tasty. There were plenty of other toppings too. The jalapenos were pickled but the olives were freakin’ kalamatas!

These were delightfully cheesy as well. There wasn’t much of a bottom layer, but the chips themselves were crunchy/chewy/greasy/salty and we loved them on their own.

This platter was pretty average overall, but somehow the flavour exceeded the sum of its parts. These were our favourite nachos thus far, if only because the others had been so lackluster.

The portion wasn’t particularly huge, but at $13.39 this is good to share, or a meal for one. 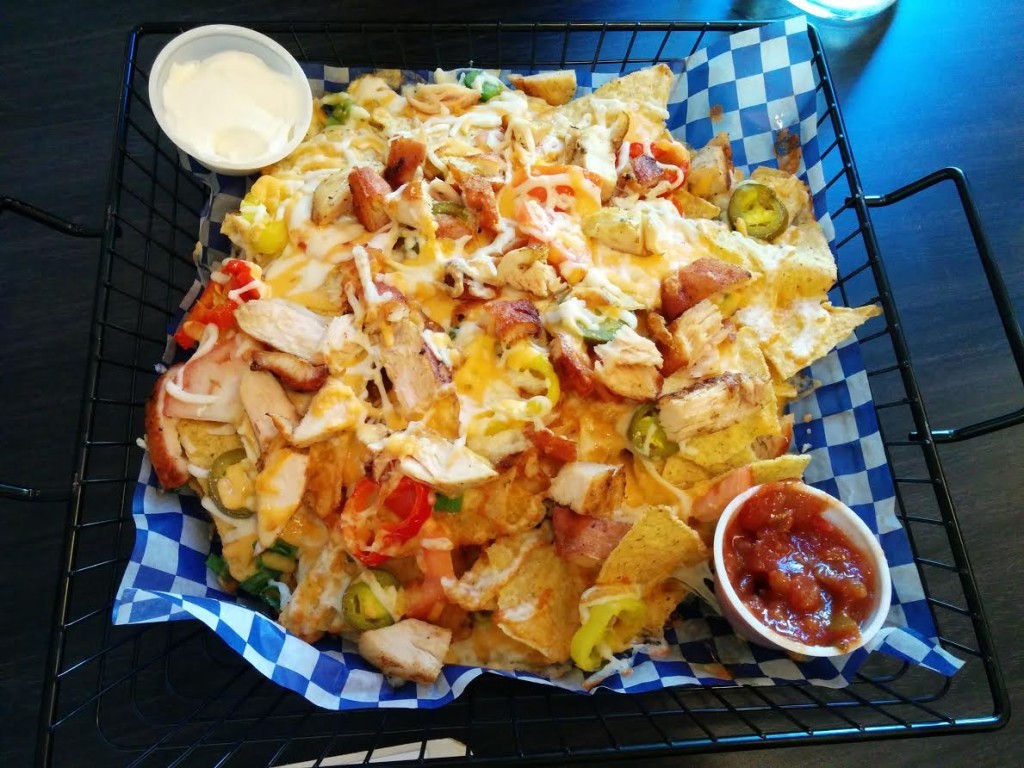 “I want to eat the whole thing.” – LuShark (The Side Dish)

After a disappointing Day 1, ReTales, LuShark and I trudged forward to the Dalhousie and Saint Mary’s University campuses. We were joined by Denton – making his 2016 nacho debut.

I didn’t go to university in Halifax (shout out to Mount Allison peeps!) so I’m not that familiar with the campus bars. I do know that the Grawood (pronounced gray-wood, apparently) was closed all summer for renovations and reopened this fall as less of a dingy student bar and more of a modern gastropub. ReTales hated the new Grawood. Denton thought it had a “pleasant ambiance”.

The nachos came in a fancy basket with green onions, tomatoes, jalapenos and banana peppers. We really liked the chicken, which had crispy bits and was only $3 to add! The chips were salty and hearty, and came in three layers! Whuuut!? There were two layers for cheese, and an extra layer of chips on the bottom. What a fine basket of nachos it was! 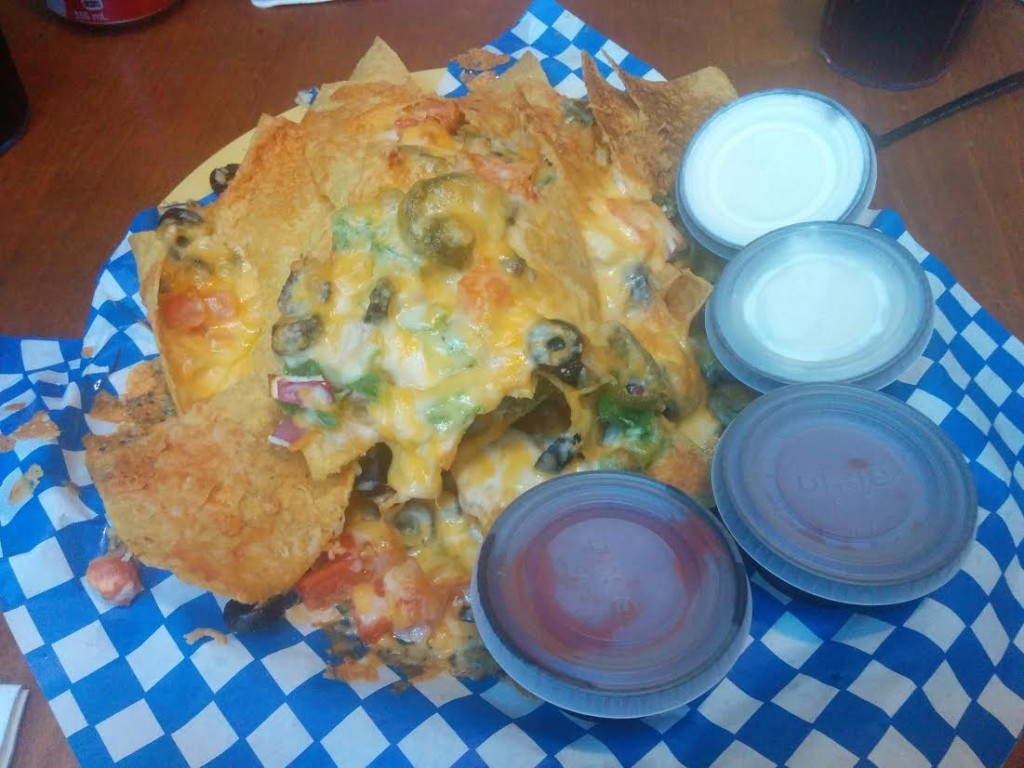 “I could make prettier nachos blindfolded in a hurricane with the lights turned out.” – Halifax ReTales

The Gorsebrook actually felt like a campus bar. We could even see the football team practicing out on the field as we ate. I guess food and drink is handled by separate companies, because we had to pay up front for our drinks from one server, while another lady took our food order which we paid at our leisure.

These nachos weren’t much to look at and not the largest platter, but you can’t go wrong with the price. We were actually pretty relieved at this point to find some classic, cheesy, cheap-o nachos.

And they were a pleasant surprise! They were delightfully cheesy – scalding hot and just oozing with cheesy goodness that was layered to the bottom.

The chips had a kick of seasoning and there was a bounty of vegetables. There were actually so many toppings that I think the Gorsebrook could double the portion of chips to make this a larger platter. 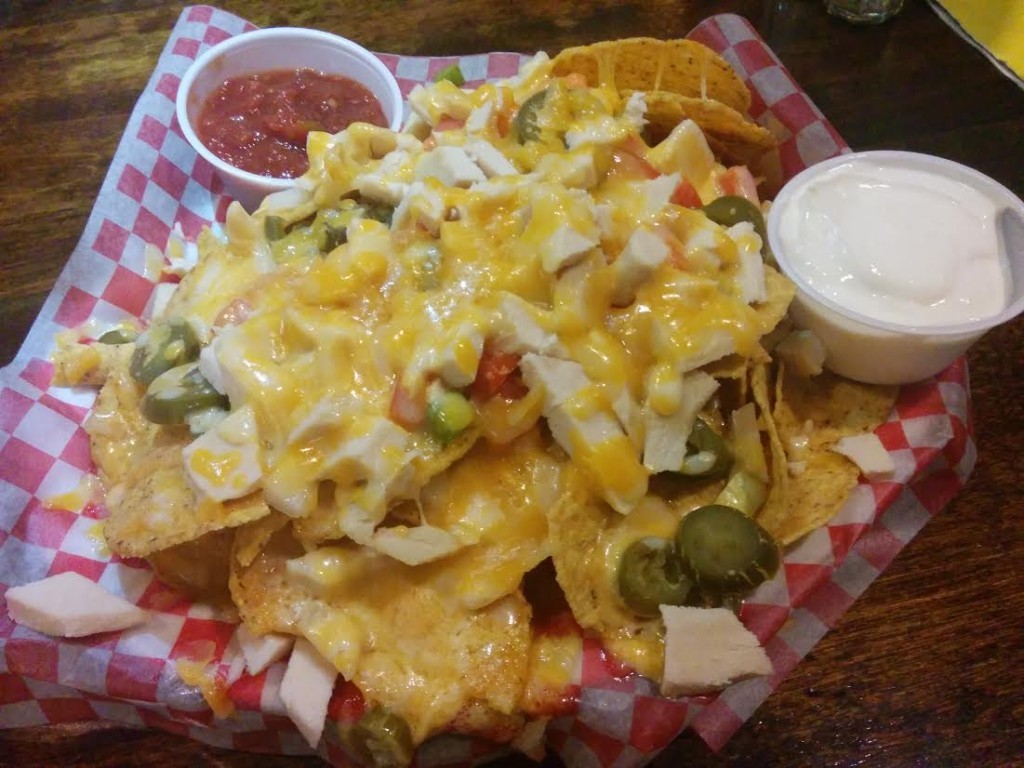 The Resolutes Club is the oldest “Private Members Club” in Nova Scotia. Membership is $10/year, but we were able to buzz in as guests and stay for lunch. The restaurant is a non-profit, which explains the welcomed price of $7.39 for our nachos. They were pretty big too – a great value!

They were smothered and layered in a flavourful cheddar cheese. Awesome. The veggies were pretty basic – subdued jalapenos and harsh cooking onions but rather decent tomatoes. The chips were salty rounds and the salsa was generic.

I would advise against adding chicken. The stuff they use is salty/boiled, ungodly stuff.

But we actually liked these! … especially for the price. As Denton wrote, “Not a rich or unique flavour; it’s salt, corn and cheese. But it’s a good flavour.” Plus, it’s a pretty chill spot and there’s shuffleboard. What’s not to like?

Congratulations, DAL students! But hey – The Gorsebrook still beat out 5 other venues, so this is a happy result for the students of DAL and SMU.

This quest was imperfect and I feel bad for everyone who could only come out for the nachos on Sunday. Who knew that the bestest, cheesiest nachos would be found in campus pubs?

I feel bad for Roy’s, which were actually one of my favourites. But this is yet another example of how the price/cheese ratio can drastically put nachos out of favour.

We ended up going to Mexicali Rosa’s on Sunday because Resolutes’ kitchen was closed and I needed a sub. Mexicali Rosa’s scored 1st place on the Spring Garden Road Quest and I was happy to revisit them for quality control purposes. However, I didn’t feel it was fair to include them in the quest results because 1) they aren’t actually in the south end, and 2) they’ve already been covered, and quite honestly, it wouldn’t be fair if they dominated two quests. Full disclosure: Mexi’s got the highest score of ’em all. 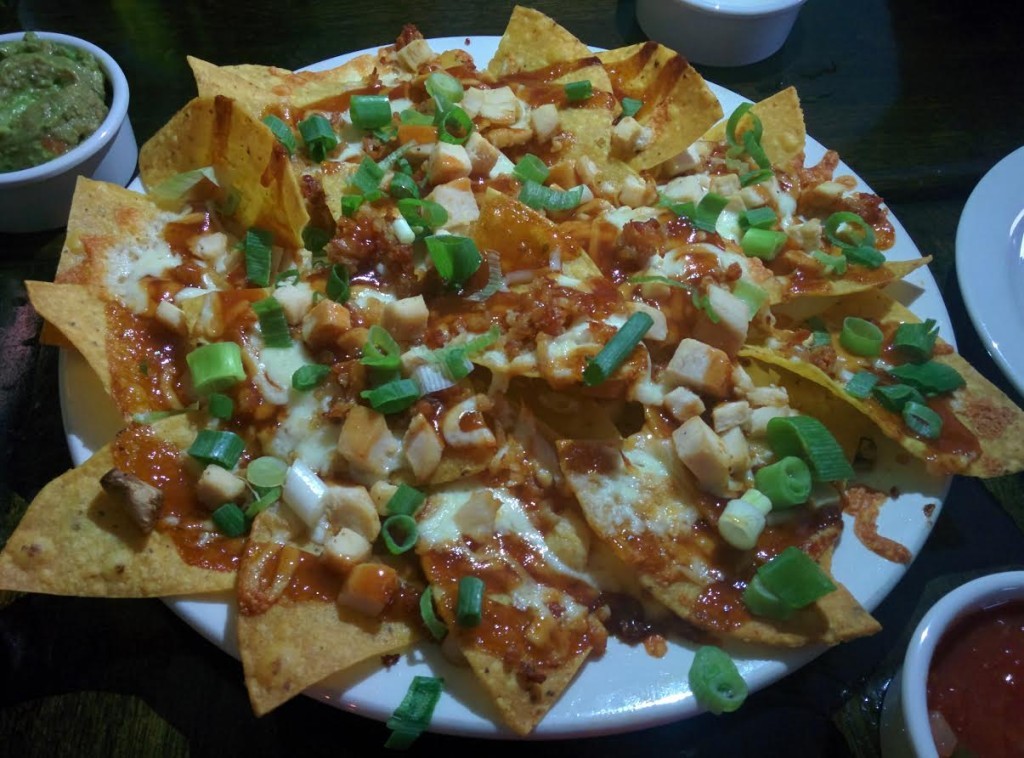 “These were some tasty nachos! I was very pleased. All flavours worked well together. Great guac!! Avocados are alive and well! Would order these for myself.” – Leah

We were given little baskets of chips and salsa to start, and I joked with LuShark that these were the best nachos of the quest so far! (It was only a half-joke). The salsa was our favourite of the day.

One of our complaints about Mexi’s is that only salsa OR sour cream is included. You have to pay for anything extra – which would be insulting if Mexi’s didn’t pre-sauce their nachos and give you the complimentary salsa with your starter chips. That’s the loophole.

We ordered the “Chicken Wing Nachos” (Mexi’s has several varieties) which came with chicken, green onions and our choice of wing sauce. Wingman chose for us: Honey Hot, and it was a solid choice! Cailin and LuShark weren’t overjoyed by the wing sauce, which would be overpowering if you didn’t like it. Others felt the flavours worked well together.

There could have been more cheese, but these nachos are carefully dressed so that there is cheese and toppings on every chip. The chips themselves were standalone good. Every bite was lovely.

LuShark was quite annoyed by the size of these, which I think is what most people complain about. I agree. $15 is too much. Go on Thursday when the nachos are discounted at $9-$11 (depending on what variety). Plus, their amazing margaritas are $5 every day!!