The goal of the Halifax Nacho Quest is to discover the best nachos in the city. A group of 8-10 participants embark on a pub-crawl-like adventure, tackling one street at a time, and seeking out nachos wherever they may be. So far we’ve done Spring Garden Road, Argyle Street, Brunswick Street and Barrington Street. And now we have conquered the Waterfront.

Halifax ReTales has been pestering me all summer to get the Waterfront Quest done (as I may have postponed it a couple of times). He informed me that it had been 52 weeks since our last nacho quest!

This one was going to be rain or shine, and luckily the thunder storm did its thing overnight and we got sunshine, patios and … crowds of tourists and Pokemon hunters!

New to the quest were Leah, Phillip, Machzy, Danielle, LuShark and Cailin (from Travel Yourself). Then there were some of the OGs: Halifax ReTales, Laurie Burns and PhotoJenn. 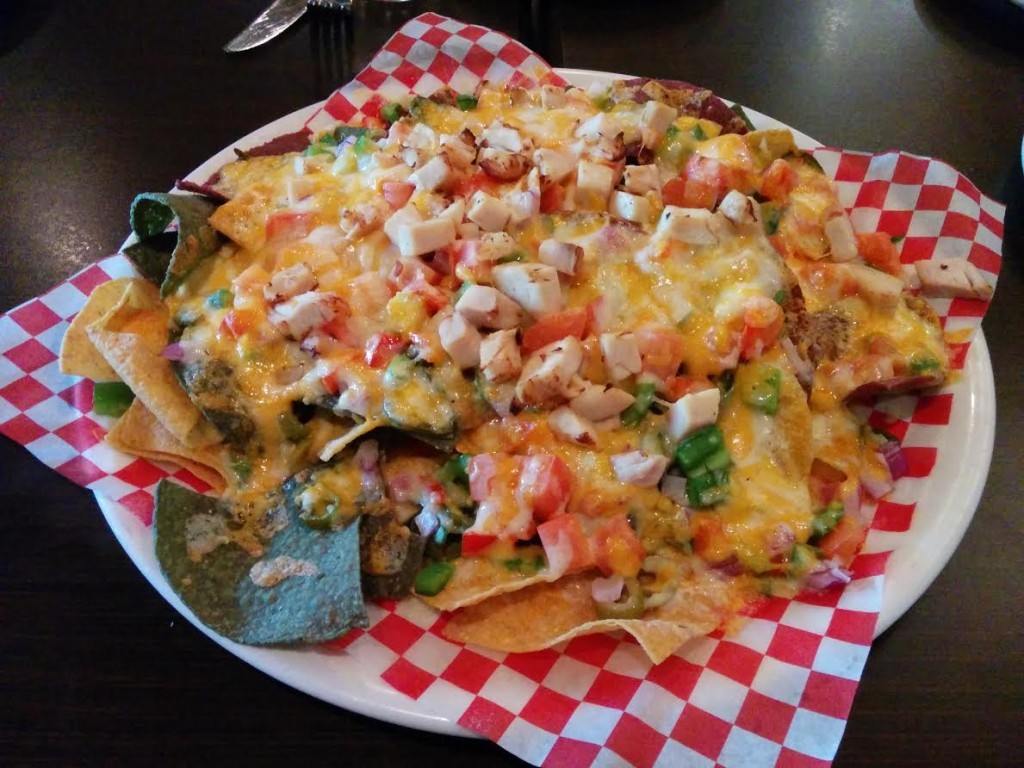 The Trapeze, at Casino Nova Scotia, did not win us over with its atmosphere/service but how about those nachos?

They were surprisingly good! They were one of the prettiest and most colourful platters of the day in virtue of the tri-coloured chips and plethora of veggies, including the elusive green olive! They were also smothered in cheese.

We disliked the “wet” chicken and its ludicrous $5 price tag. There also weren’t enough chips, impacting our perceived value and overall satisfaction. Our enjoyment decreased as we ate these and realized they just weren’t as good as they looked. 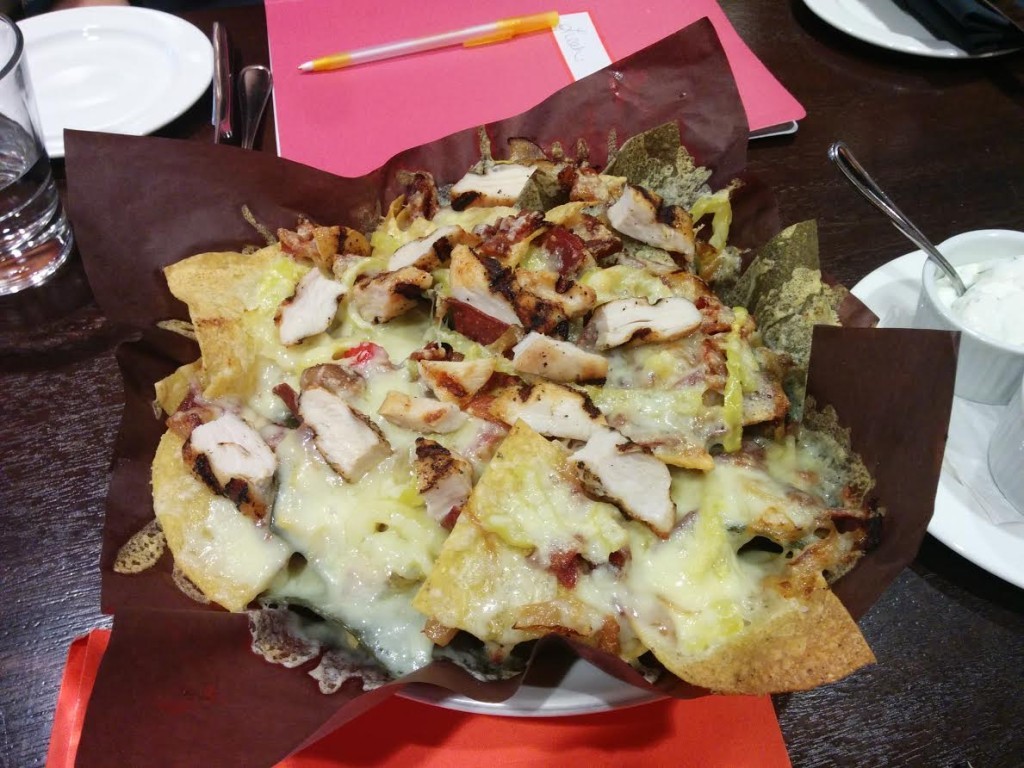 These nachos may not photograph well but they scored 1st place for Aesthetic Appeal. Up close and personal, each individual component is simply mouth watering: aged cheddar, maple bacon bits, caramelized onion and firm banana peppers. The chicken was a grilled breast, diced and thrown on top. People raved about this – they could taste the grill marks.

We were also mesmerized by the salsa and sour cream. The salsa was a Mexican-style, thin and flavourful. The sour cream had cilantro in it, which was a nice touch.

Needless to say, the Harbourstone scored well when it came to the quality of ingredients, especially the full flavoured cheddar.

At $13 this is a great value – premium ingredients and great flavours.

ReTales’ one reservation was that these don’t deliver that traditional nacho flavour experience. Danielle felt that “These would be better on a flat plate and layered better with more veg”. There was also the pool of grease lying underneath the pile – but I’ll forgive this as I think it was due to the abundance of aged cheddar. 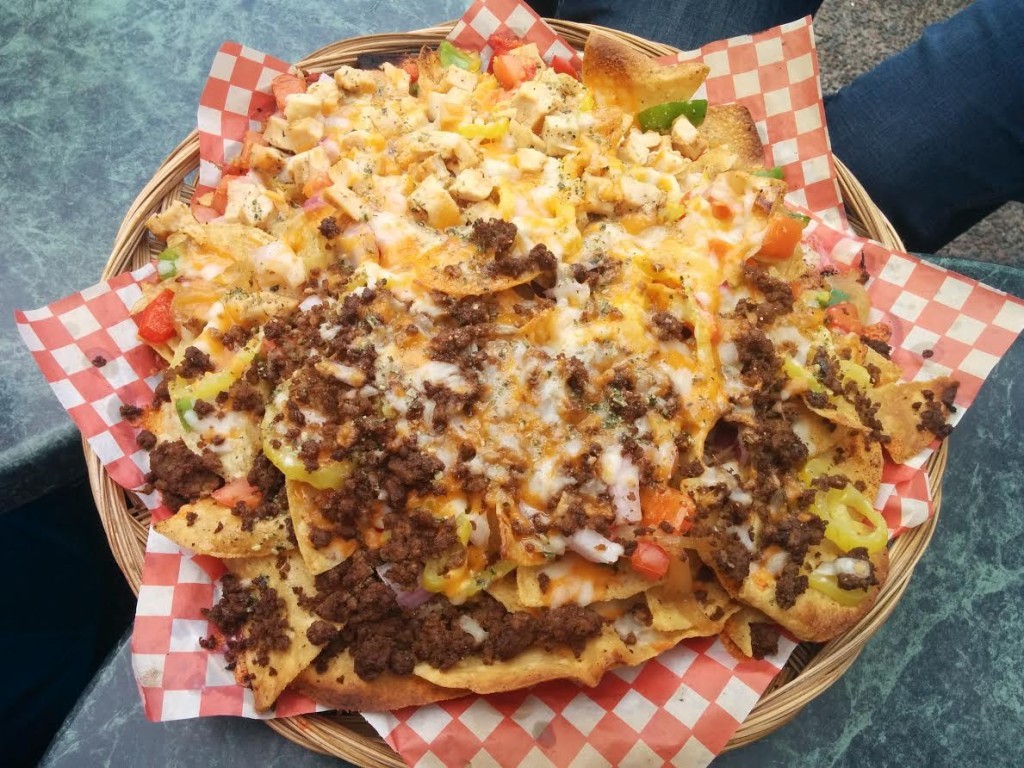 “Sneaky – looked like lots {of cheese} but no layering.” – Cailin

Usually when a place offers both chicken and beef we get both in order to get a comprehensive analysis. Sometimes we get charged one price for both proteins and sometimes, when a place pre-portions their meats, we get double-charged – which is why there is so much meat on these nachos. There is a full portion of beef on one half and a full portion of chicken on the other.

We weren’t particularly pleased with the spice in the beef or the quality of the chicken. Take off the proteins, though, and this is a huge platter of nachos that can easily feed a group for $14.

“Boring low quality toppings,” said ReTales, but at least they were plentiful and tried to be exciting. There were caramelized onions, basil oil and spiced chips.

The salsa was weirdly too sweet. There were too many bare chips. These nachos weren’t without their problems but I think we agreed that they were better than we thought they’d be. 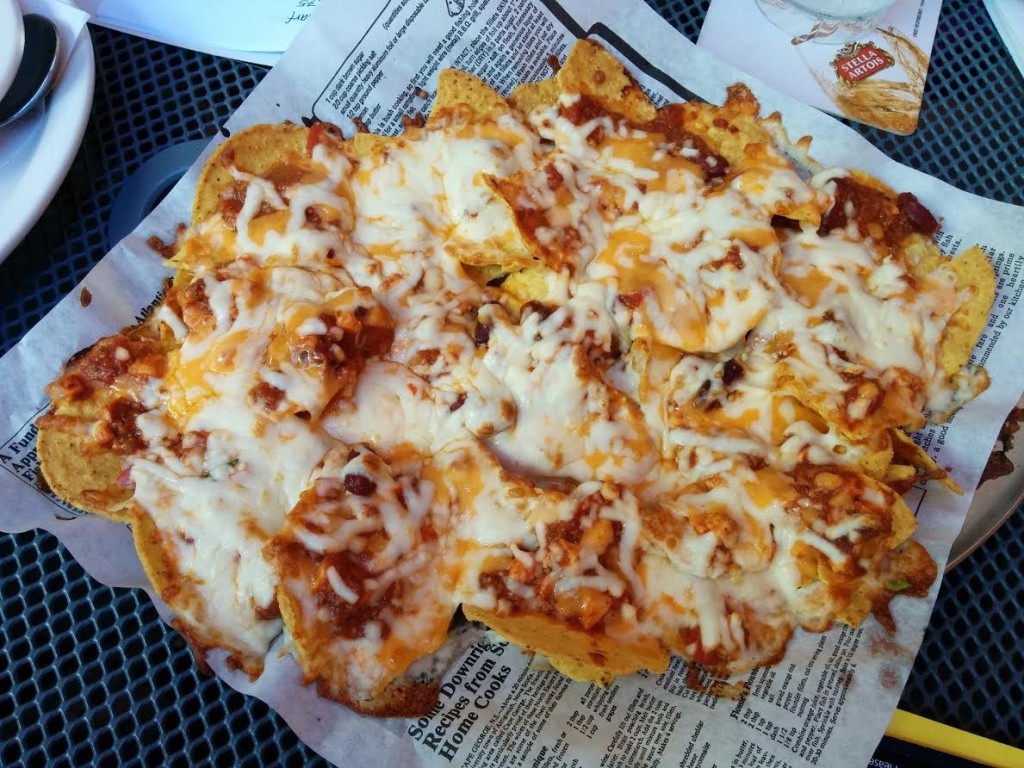 Stayner’s Wharf has two varieties of nacho on the menu – “Chachos” (chilli chicken nachos) and “Vachos” (vegetarian nachos served with a side of donair sauce). Until recently these were available in two sizes but the larger size has been taken from us. Shucks!

The Chachos were well-liked. The chilli created some sogg factor, but Leah noted that the “Crunchy rounds {were} strong enough to withstand some sogginess from {the} chilli”. The chilli itself was pretty run-of-the-mill and the chicken pieces were barely noticeable. There was a good amount of cheese blanketing the single layer of chips. 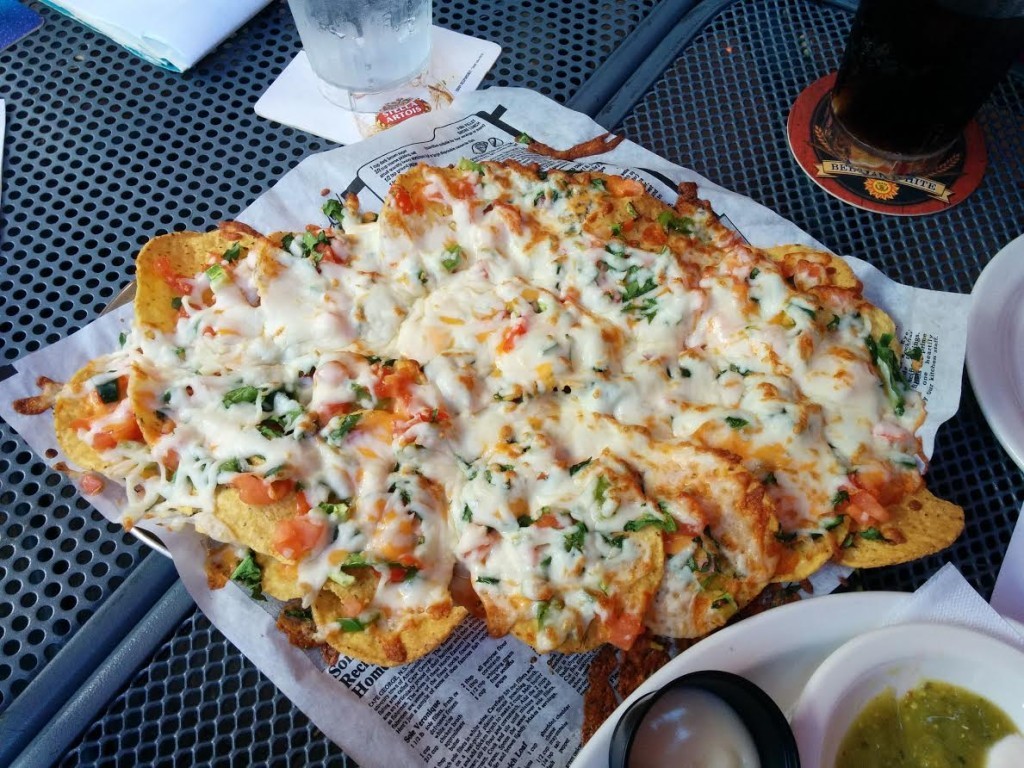 “My tongue is still full of flavour after eating!” – Laurie Burns

The Vachos were definitely the favourite! Green & red peppers, green & red onions, tomatoes, jalapenos and chopped spinach cloaked with mozzarella made these a colourful veggelicious feast! The fresh jalapenos were diced so tiny we could barely see them, but they lent this wonderful lingering heat.

The donair sauce was an interesting accompaniment to the Vachos. We also adored the choice condiment: salsa verde.

These nachos were creative, well plated and adorned with cheese and toppings. They were delicious, and the group felt that they were a great value as well.

Rochelle was our favourite server of the quest and we loved the secret patio! 100% satisfaction. 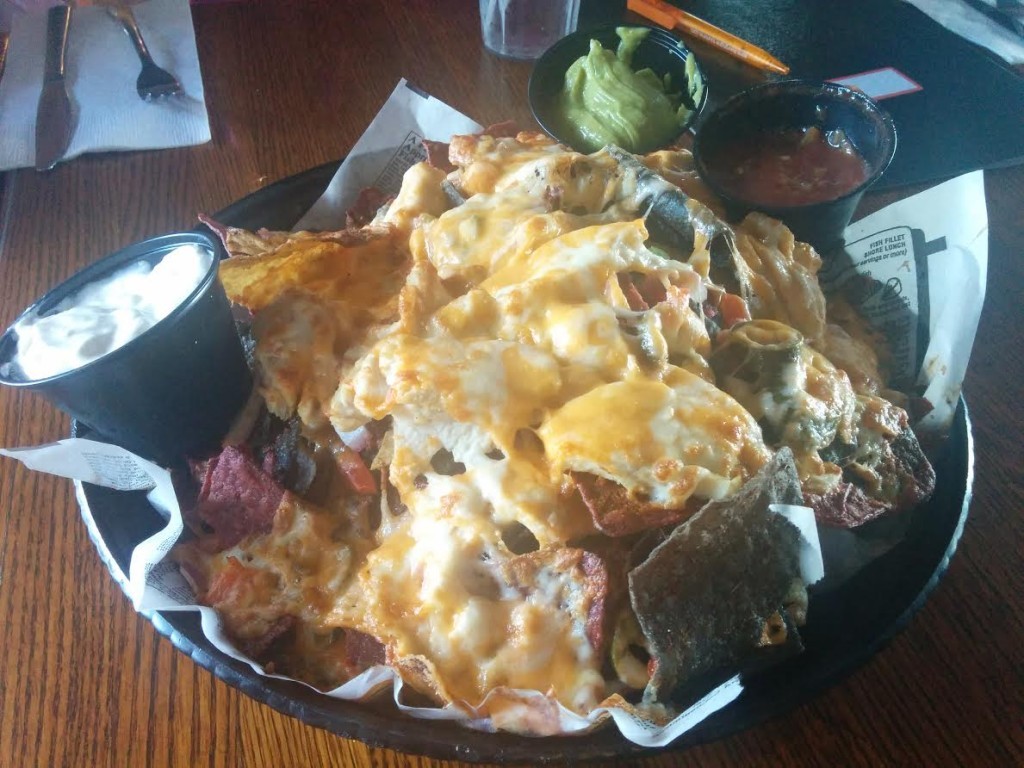 I think of Murphy’s as a tourist trap, but the 10 of us found ourselves there sharing a single plate of nachos and drinking tap water to the bemusement, and most certainly the annoyance of our server. This was a water stop for us, especially as certain individuals (*ReTales, cough*) can be quite vocal in their shunning of domestic taps. The server fought back by shunning our need for small plates. Touché.

But I gotta give some props to Murphy’s – they exceeded our expectations! What we got was a cheesy pile of chips dusted with this lovely seasoning blend that really complimented the chips and chicken, the latter being prepared in large slices that cradled the curvature of the chips. Nice.

We felt that there could have been more toppings, but the biggest and most laughable problem with these nachos was the layering. Once we got past the delicious top layer we noticed that the bottom layer was just a pile of broken chips. 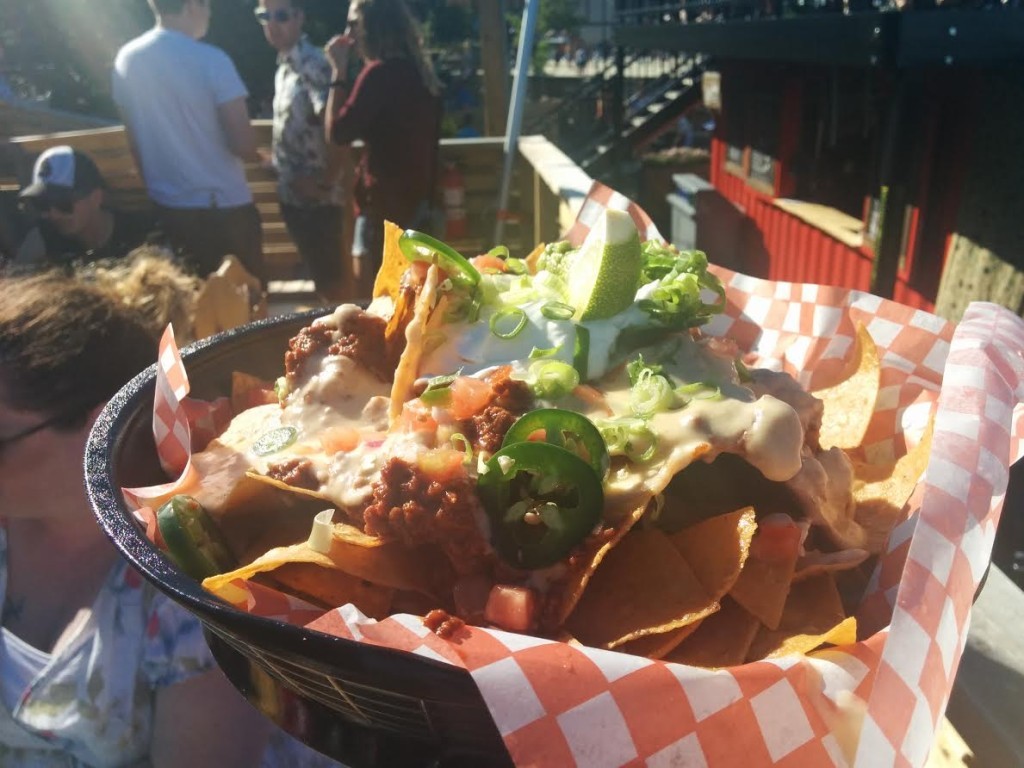 “I’m at a game with cheese ‘n chips and someone spilled their chili dog on it.” – LuShark

Con queso. Cheese sauce. Is cheese still cheese by any other name? Or rather – are nachos with cheese sauce still nachos? Wikipedia says “The dish is composed of tortilla chips covered with cheese or cheese-based sauce”, the latter being termed “ballpark nachos”. My group was expecting “Nachos” (with a capital “N”) and they were thrown off by the cheese sauce. Or maybe they were just thrown off by the price.

“Almost the same taste as Wendy’s nachos (a guilty pleasure of mine and at $3!)” – Laurie Burns

There were others problems too: the toppings weren’t distributed evenly so impressions varied among the group. There was a grand cavern of bare chips, which themselves were too crunchy/bland. The guacamole was also without flavour.

The chili on the other hand was utterly fabulous! I can’t speak highly enough of the chili.

But it still wasn’t enough to boost morale. The group felt that what we got wasn’t worth the price.

“So disappointing that I am making an additional comment.” – Phillip

Biggest Weakness: They weren’t what we expected/too expensive. 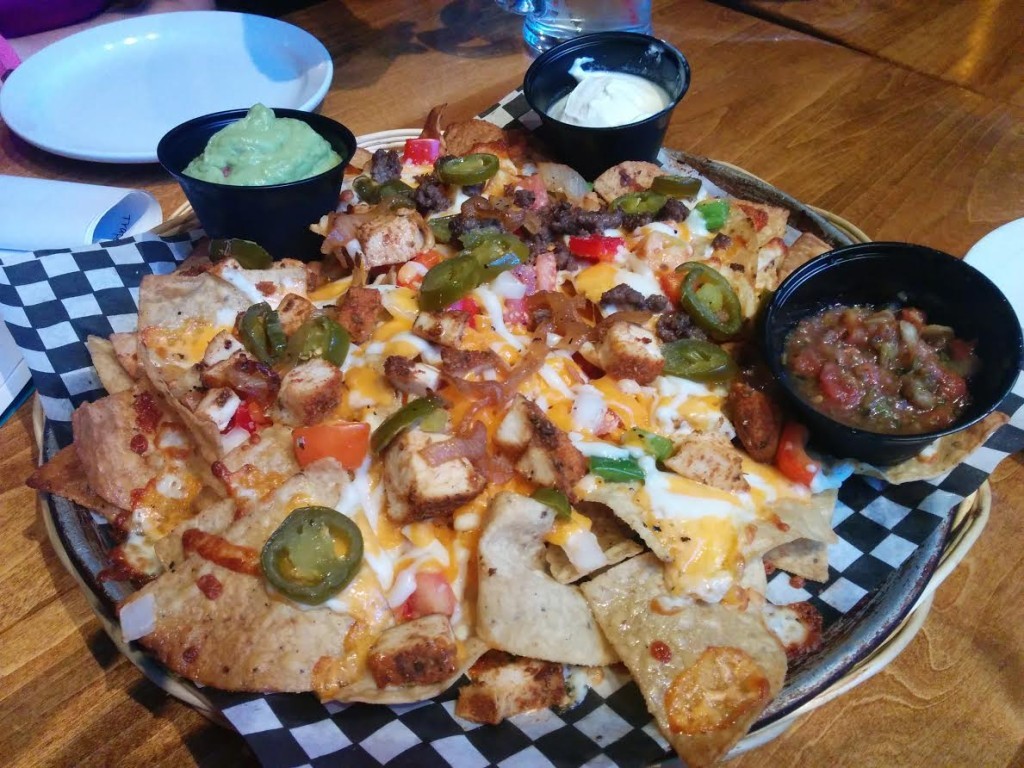 The group felt these were pretty solid for a classic nacho.

They are essentially the same recipe as the Lower Deck, with its basil oil and caramelized onions, except instead of banana peppers there are pickled jalapenos. We felt that these were better quality than the Lower Deck, especially where proteins are concerned. However, the proteins are a bit pricey for what you get and the house-made salsa was watery and overpowered by dry herbs.

It was a fair size with decent flavours and adequate cheesiness. We were neither enamoured nor repelled by these nachos. They were somewhere in the middle of the pack. 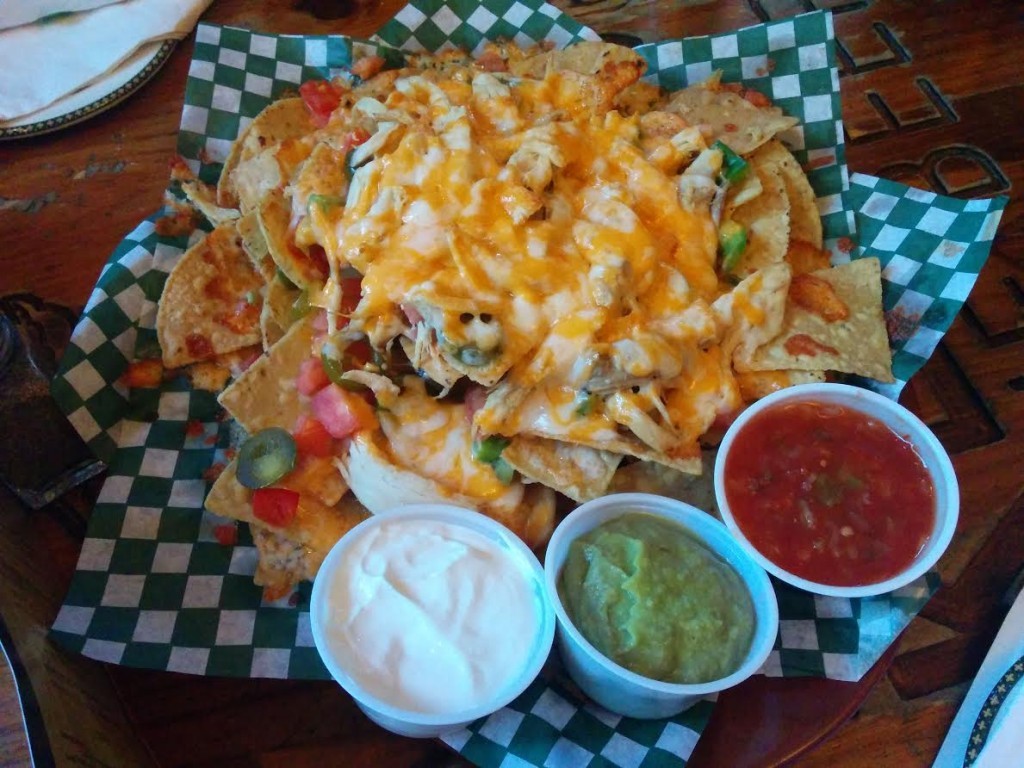 “The chicken (from the bone) made such a difference!” – ReTales

This was the first time we had a proper second layer of cheese! The Old Triangle got top scores for Cheese Coverage, Layering, Topping Distribution and Quality of Toppings.

The “shredded chicken” was real chicken! Leah wrote that it “actually tastes like health!” – like chicken soup for the nacho soul! The chicken and cheese went a long way to making this one of our favourite platters of the day. Otherwise, the group felt they were pretty standard and maybe not the best value (I personally think the layer of cheese itself warrants the price, if not the size).

Best Guacamole
Stubborn Goat
(The rest were all tube guacs)

No matter how I add it up – everyone loved the nachos, and the “Vachos” in particular, at Stayner’s Wharf. They won by a landslide.

We loved the chicken at The Old Triangle. Otherwise I wouldn’t personally dish out any money for additions at these venues – maaaaybe the chicken at Murphy’s (but why would I be there?). Between the two chili ‘chos we encountered, The Stubborn Goat had the superior chili but not the most appreciated overall package.

In terms of the best service/atmosphere we loved Stayner’s Wharf. 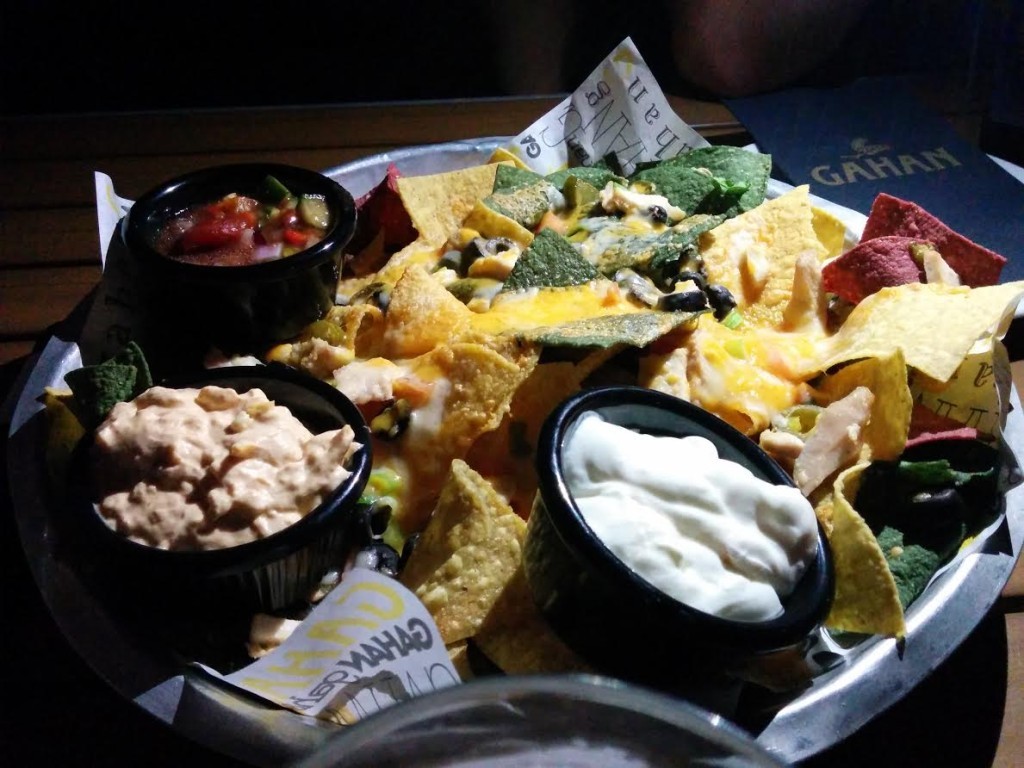 The Gahan House gets a bad picture and no rating because we simply couldn’t get in. We tried three times and each time we were told the kitchen was backed up by 45 minutes. Not wanting to compromise the quest, we took a pass. After the quest, 4 of us went to check it out and even though we were told there was a 35 minute wait for food, we waited much less time than that.

Was it worth the wait? Not really. You get to choose two sauces: salsa, sour cream or cheese sauce. We got all three of course, and I quite liked the cheese sauce. The Gahan House also uses a good cheese on their nachos but it wasn’t a large portion and the four of us wouldn’t move to further it to the next round of the quest.