SOMO (South of Morris) is brimming with gourmet, artisanal, authentic, fancypants, thin crust, Italian-style pizza – or whatever you want to call it. Whereas the Pizza Quest at large is generally a pepperoni & pajamas affair, I mustn’t ignore the restaurants offering night-out-on-the-town fare – something you put on a shirt for, and enjoy with a glass of wine.

Everyone has their favourite, but I’ve always been hesitant to proclaim my pick without an adequate analysis.

So I partnered up with Cailin O’Neil from Travel Yourself, as well as MGyver and Talix from my pizza team, to complete a south end pizza crawl. For the sake of consistency and to focus on the fundamentals, we ordered a basic margherita pizza (mozzarella, basil, tomato) at each restaurant.  Cailin even filmed the adventure, which you can watch below. 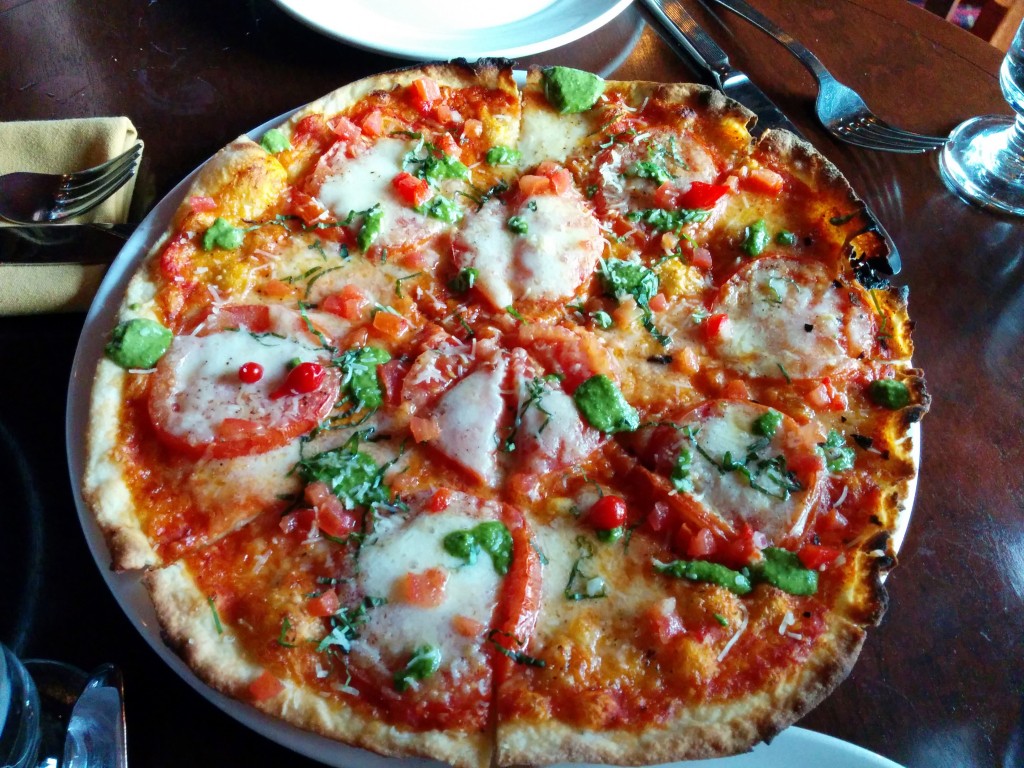 When I think of Cafe Chianti I think of fine dining a la Chef Terry Vassalo, with his notable pasta and seafood dishes. However, there is a more casual dining area by the bar and 6 varieties of pizza on the menu.

This pizza had a cracker thin crust and lots of flavour. Incorporating Peruvian “sweetie peppers” and globs of “salsa verde” (which I think was actually closer to pesto), this pizza transcends the usual parameters of a margherita pizza.

Cafe Chianti doubles down on the tomato factor, using both tomato slices and diced tomato as a garnish. Fine strings of basil are scattered around the pie and there is a decent amount of cheese. 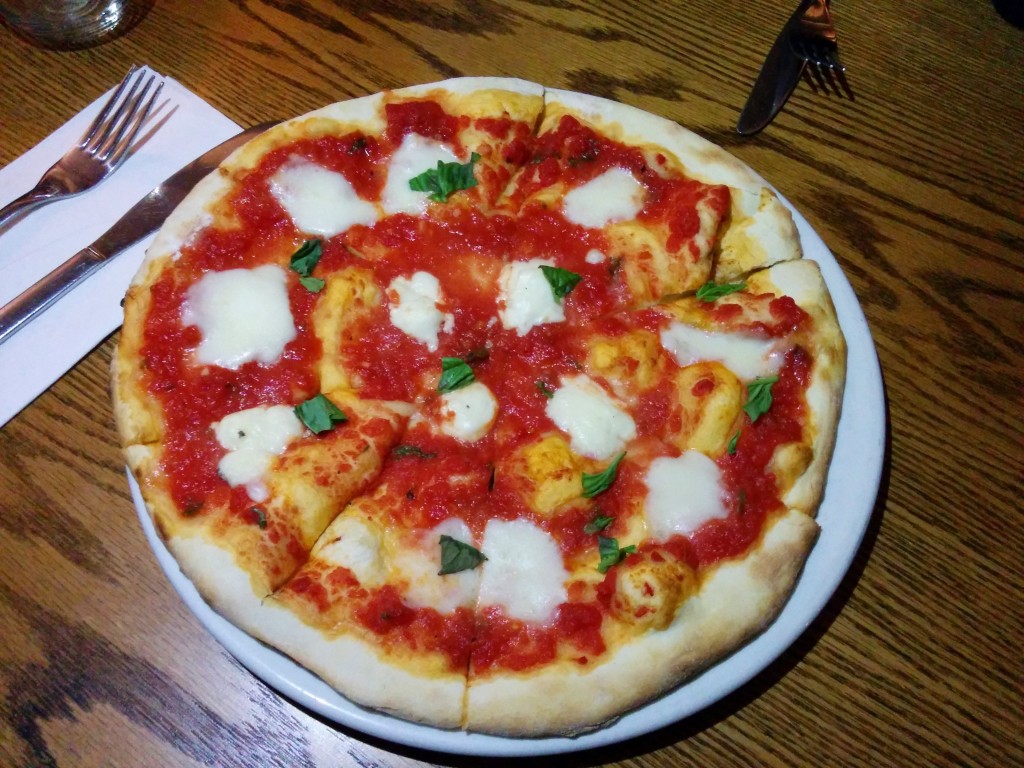 Morris East could very well be the flagship of the SOMO pizza neighbourhood (there is also a second location in the Larry Uteck area). The SOMO location uses a traditional wood burning oven brought over from Italy. The pizzas are somewhat Neapolitan in style, but they tend to be more inventive and incorporate more local ingredients than a typical VPN joint.

Morris East recently appeared on the Food Network’s You Gotta Eat Here, touted as the place to eat pizza in Halifax.

As you can see, the crust is more doughy than the previous pizza. In fact, it was the doughiest crust of the day (which isn’t necessarily a bad thing). We all liked the crust and the sauce, and we really liked the globs of quality mozzarella. We just wish there was more of it. The basil was really quite skimpy, and this pizza didn’t pack as much flavour as I would wish.

I suspect that you would have a better experience at Morris East if you ordered one of their more creative pizzas. Also be warned that the space is quite small, and you may find yourself banging elbows with the table next to you. 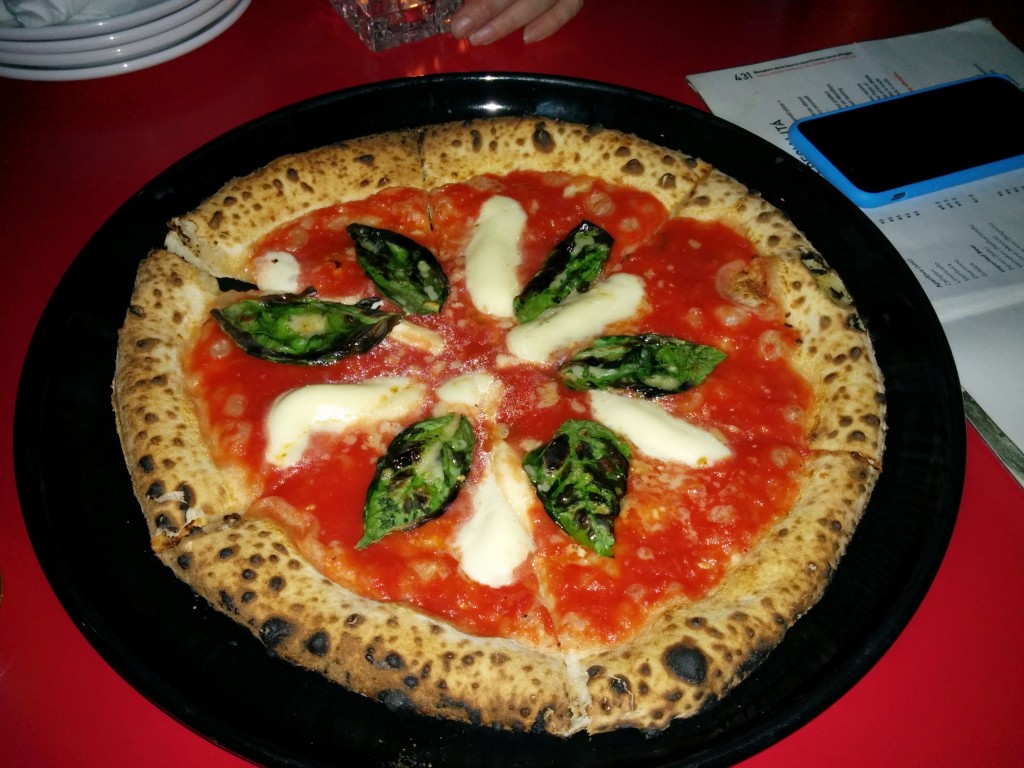 St. John’s-based Piatto is the only VPN certified pizza in Halifax. That means Piatto has to use specific (often imported) ingredients, equipment (wood burning oven) and cooking procedures consistent with those established by the Associazione Vera Pizza Napoletana. Click here to see the list of requirements.

The atmosphere is markedly different than at Morris East. We liked the open kitchen, and we appreciated having a bit more space.

We didn’t like the pizza as much. I get that Neapolitan pizza is known for charred bubbles on the crust, but this one had too many burnt tasting poka dots. The cheese was good and the sauce was tasty. Perhaps due to the abundance of sauce, this pizza was a floppy folder/fork ‘n’ knifer. My experience with Neapolitan pizza is admittedly limited, but I have had soggy VPN pizza in the past so maybe this is acceptable and welcomed by purists. I have, however, had Piatto’s pizza in the past and I did not find it to be floppy.

I actually think something has changed at Piatto. Check out this picture I took of the exact same pizza in 2012: 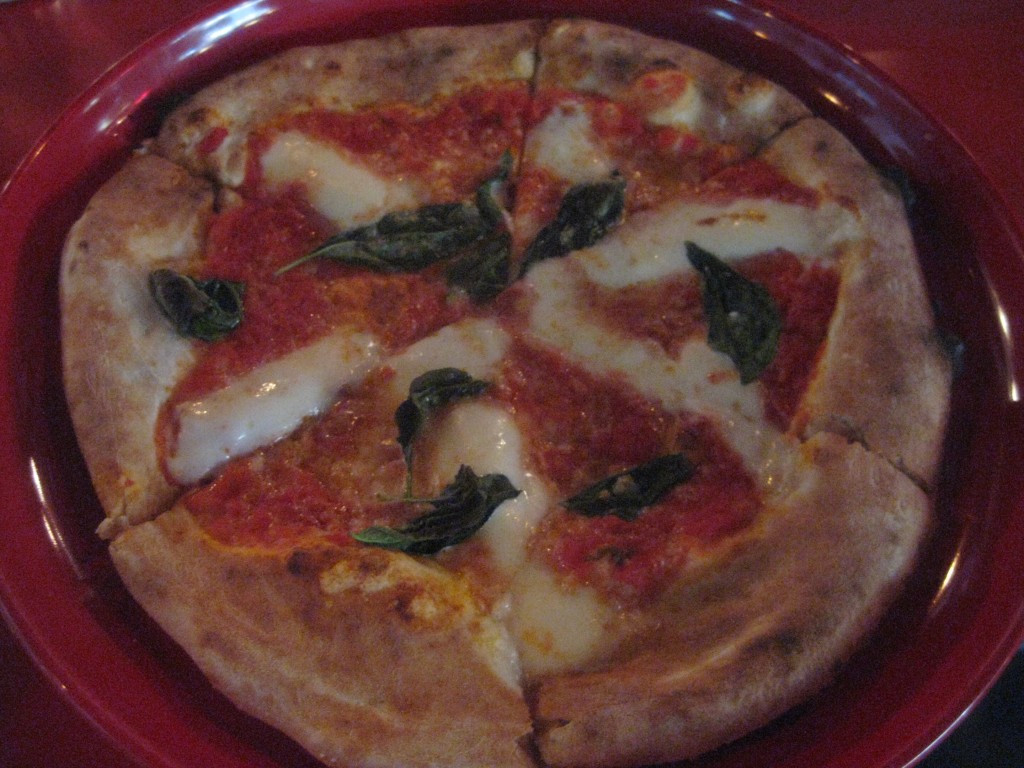 This is a mystery to which I simply do not have the answer. 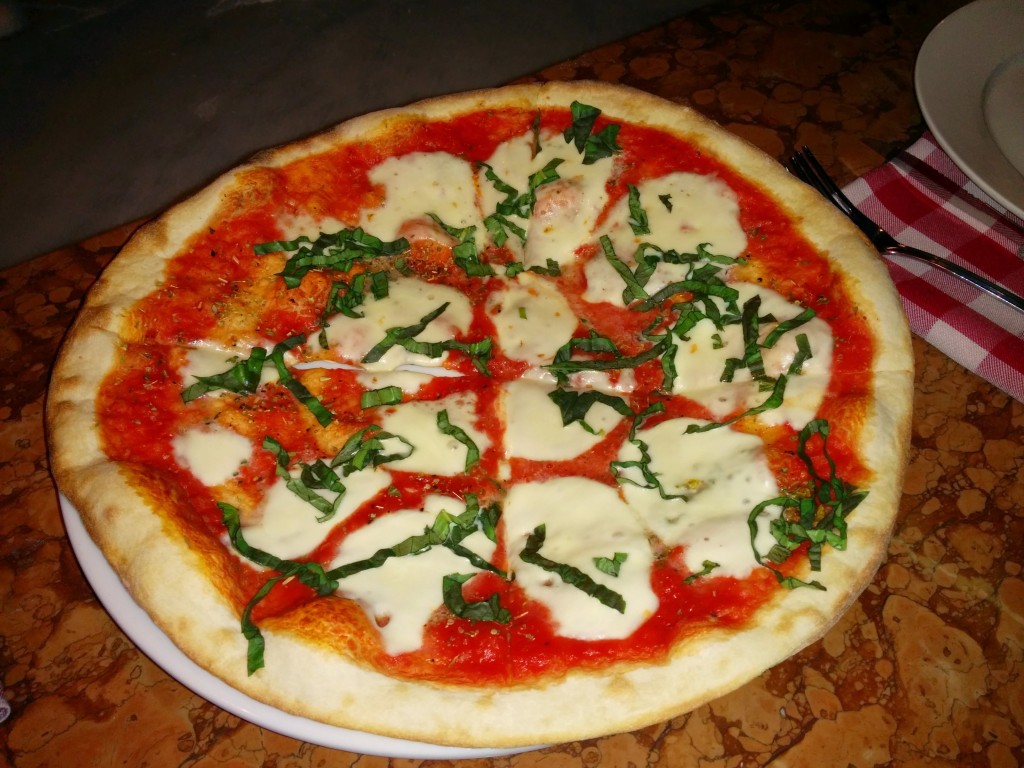 A Mano was so busy we had to sit at the bar, but this afforded us great spectator seats at the pizza-making arena. We could ask questions to the pizza cooks as they prepared the food right in front of us. I noticed that aMano isn’t trying to be as Neapolitan in style as Morris East or Piatto. They use a dough press and sprinkle the pizza sauce with dried herbs before baking in a propane oven. Their pizzas may not have those charred blisters reminiscent of a Naples pie, but we enjoyed the thin sturdy crust.

What we noticed about this pizza was that it was flavourful. The sauce packed a punch, thanks to the seasoning, and there was no shortage of cheese or shredded fresh basil.

This was unanimously our favourite pizza of the day. Tomavino’s is one of two pizza shops on the Halifax Peninsula (the other being Salvatore’s) that I think qualifies as both delivery and gourmet pizza.

To see how Tomavino’s performed in the delivery category, check out the Halifax Peninsula Pizza Finals. The short version of that story is that Tomavino’s holds its own as a delivery joint, though I think pizza integrity is best preserved when served in-house. Previously there has been some controversy over the merits of the crust – but not on this occasion. Except for Cailin, who didn’t like the anise flavour, we all really loved this crust. For the best experience, try it in the restaurant.

Tomavino’s is a shredded mozza kinda place, but they actually use real mozzarella for the margherita pizza. My only complaint is the carelessly commercial tomatoes – further demonstrating how this pizzeria dances on the line between American delivery and Italian gourmet.

The restaurant itself had a rather pleasant atmosphere. Cozy and romantic, this is likely a great spot for an affordable date night.

* these results were unanimous, with the exception of Cailin who ranked Morris East #2.