We’ve polled our staff for their favourite books of 2015 and came up with enough graphic books to warrant a post of their own. Enjoy! 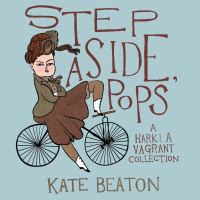 Step Aside, Pops : a Hark! A Vagrant Collection written and illustrated by Kate Beaton
Recommended by Joanne; Amy M.: “A continuation of her “Hark! A Vagrant” collection of comics that parody famous historical, literary, and pop culture figures. I loved this book, and have been recommending it to friends and family. The jokes are hilarious, and she covers such a broad range of literary/historical subjects that you find yourself LEARNING just as much you’re laughing.”

Hinterkind. 3, Hot zone written by Ian Edginton, illustrated by Francesco Trifogli
Recommended by Elinor: “A terrific wrap-up of the story of human survivors in a post-apocalyptic world where magic and the Fae come back after most of humankind is gone.”

Saga, Vol. 5 by Brian K. Vaughan
Recommended by Sarah.
“While Gwendolyn and Lying Cat risk everything to find a cure for The Will, Marko makes an uneasy alliance with Prince Robot IV to find their missing children, who are trapped on a strange world with terrifying new enemies”–From publisher.

Rat Queens. Volume two, The far reaching tentacles of the N’rygoth written by Kurtis J. Wiebe, illustrated by Roc Upchurch & Stjepan Sejic
Recommended by Sarah.
” A brand-new, booze-soaked tale of the Rat Queens reveals a growing menace within the very walls of Palisade. And while Dee may have run from her past, the bloated, blood-feasting sky god N’rygoth never really lets his children stray too far.”–From publisher.

Nimona by Noelle Stevenson
Recommended by Sarah.
“Nimona is an impulsive young shapeshifter with a knack for villainy. Lord Ballister Blackheart is a villain with a vendetta. As sidekick and supervillain, Nimona and Lord Blackheart are about to wreak some serious havoc. Their mission: prove to the kingdom that Sir Ambrosius Goldenloin and his buddies at the Institution of Law Enforcement and Heroics aren’t the heroes everyone thinks they are. But as small acts of mischief escalate into a vicious battle, Lord Blackheart realizes that Nimona’s powers are as murky and mysterious as her past. And her unpredictable wild side might be more dangerous than he is willing to admit”–From publisher.