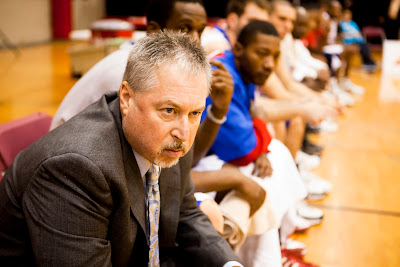 Fresh off a solid home opener win against the Vermont Frost Heaves, the Halifax Rainmen (1-0) make their road debut in Quebec City as they face off against one of their Canadian counterparts, the Quebec Kebs (1-0).  The two teams have already met in the preseason where the Rainmen won both contests.  The Kebs will host the Rainmen tonight in Quebec city.

To help preview tonight’s game, I had the opportunity to speak with Quebec head coach, Rob Spon.  This is Spon’s first year with the team but he brings a lot of coaching experience, including stints with the Manchester Millrats and Maryland Green Hawks. I was able to ask Rob his thoughts on the upcoming matchup with the Rainmen, his thoughts on Quebec City and a little about his time as a scout for the Cleveland Cavaliers.
__________

Romy (Haligonia.ca): First off, what have your thoughts been of Quebec City so far?


Coach Rob Spon: Quebec City is beautiful; you have old Quebec with the shops and then you have modern Quebec with everything to do. The French speaking I have to do a better job of.


Romy (Haligonia.ca): What sparked your move to take the Kebs coaching job?


Coach Rob Spon: Taking the Kebs job was easy after talking to Vincent two years ago. I liked their crowds and atmosphere, the people seemed to get into basketball but not as much as Halifax. You have the best fans. (They are) very knowledgeable and know when to cheer and how to heckle the opposing team and coach…I love playing there.

After Ian told Vincent I was availiable this June, Vincent and his dad, Conrad, came after me strong and put a nice short and sweet deal on the table. Ian was after me too, but the Kebs put the offer out there first and after getting to know Conrad, I knew I was in good hands.  They gave me free reign over the team.


Romy (Haligonia.ca): Your Kebs had a big win against the Saint John Mill Rats in your season opener, what has impressed you so far with your team?


Coach Rob Spon: The team chemistry and our defense and how they bought into my system.  You know, my teams gotta play D.


Romy (Haligonia.ca): The Kebs’ home opener is against the Halifax Rainmen on Thursday night. From what you saw during the preseason, how do you prepare your team for this matchup?


Coach Rob Spon: Well, like I told Andre at the beginning, I picked the Rainmen to win our conference. He does a great job of bringing in top talent and Coach Berry does a great job coaching them. They obviously are bigger than us, so we have to do a great job of boxing out because they go to the offensive boards strong. We need to get to Desmond, so he doesn’t get open looks or it’s money.


Romy (Haligonia.ca): You have a couple of former Rainmen on your roster in Cordell Jeanty and Aaron Spears, what do these two players bring to the Kebs?


Coach Rob Spon: That’s funny because everybody thinks Ian (McCarthy) brought our guys in with the  Millrats but they were mostly former players of mine like Spears, as he played for me at Gary. Des is my guy. So Des had Andre draft Spears knowing he is a great low post presence. He is very good scorer in the post and has a nice15 ft jump shot. Cordell I have always liked because he always battles hard.


Romy (Haligonia.ca): Lastly, I read that you were a scout for the Cleveland Cavaliers…will the city of Cleveland ever recover from Lebron’s “Decision”?


Coach Rob Spon: I am no longer (a scout) since my contact, assistant GM, Lance Blanks, took the Suns’ GM job. Jamario Moon is one of my former players.  The city, unfortunately, will never recover.
__________

Thanks again to Rob for taking part in our game preview.  The Rainmen and Kebs play tonight in Quebec City, be sure to check out more about the Quebec Kebs at their official website, www.kebsdequebec.com