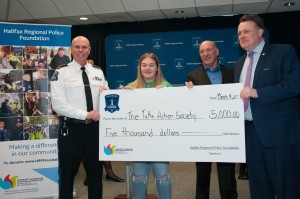 The launch featured $100,000 contribution by brothers and well-known Halifax philanthropists, Mickey MacDonald and Colin MacDonald. Mickey MacDonald, President of Micco Companies, was on hand to present Chief Blais with the cheque and provide remarks. Chief Blais also announced Dartmouth-based Take Action Society as the first recipient of an HRPF grant of $5,000. 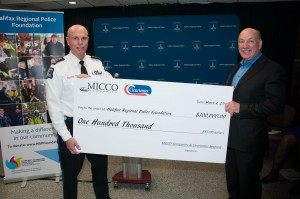 “HRP is very grateful for this generous gift and overall support for this initiative,” said Chief Blais. “Mr. MacDonald’s personal story is one of positive influences and we’re thrilled that he’s standing with us at this important event.”

“I believe Halifax Regional Police Foundation has tremendous potential to do positive work in our community, particularly for youth,” said Mickey MacDonald, President and CEO of Micco Companies. “Someone whose life and career was deeply influenced by positive role modeling, I am pleased to support this Foundation and what it stands for.”

The Halifax Regional Police Foundation was formally established in late 2017 with the goal of providing ancillary funding for crime prevention and supporting initiatives for communities served by HRP. HRPF’s areas of focus are supporting youth and encouraging innovation in support of safer, stronger and more inclusive communities. People who wish to make a donation to the Foundation are invited to go towww.HRPFoundation.ca.