[This next Earth Week post comes from the team behind Halifax Retro, a new blog about sustainable living. I’ve pitched in to put together a site that will launch soon and we’re looking for content from the community.  If you’re interested in blogging, vlogging, or podcasting on a semi-regular basis, get in touch with the team at staff (at) halifaxretro (dot) ca or DM me on Twitter. In the meantime, here’s a piece from the founders of the project.]

Up until the last year or so, we lived a pretty basic life. Like so many people, we were living through the usual capitalist gains you’d see of a typical young urbanite couple trying to work their way up the ranks in society. Value tended to be distributed rather trivially.

It wasn’t until a momentary lapse in reason became a fork in an otherwise oblivious road – the knowledge we thought we had about the world, suddenly became shrouded in darkness.

We came to the conclusion last year, that to become one with the “real” world, we needed to look past the smoke and mirror puppet show of the “fake” world, spoon-fed to us on a daily basis. What we found after taking a closer look was a nightmare of information wars which we continue to battle through today.

A whirlwind of facts and figures, schemes and deceit, mixed with the ignorance of the general public who together could help, but alone are quietly being numbed. Documentaries, internet sites, activist groups, are all trying to show us things that most would quickly want to forget rather than fight: our food is genetically engineered, with small businesses and farmers getting slowly conquered by evil corporate empires; poor animals are being abused, used or obliterated into extinction; our air is becoming un-breathable, water un-drinkable; population, temperatures and oceans are slowly rising above our maintainable limits, yet, does anyone care? Or a better question, what are we supposed to do if we do care?

We might not be able to do anything, but damned if we don’t try. The catalyst for these “enlightened” perspectives we’ve stumbled upon was spawned from our weekly visits to the Halifax Farmers’ Market. The tight-knit network and symbiotic atmosphere of supporting local producers of our local seasonal crops inspired a change in us to try and live more for the earth, and not just on it. And being former editors of our school newspaper, it felt natural for us to share our process of bettering our ways with anyone who would listen. With so many people entering the beginner’s stage of bridging the gap between living their chosen lifestyles, and being a more conscientious consumer, there is still time.

We made the obvious changes: started recycling more, stopped eating mammals and ate more organic foods, however, we still asked ourselves what more could we do? We drew on our experience and passions, and decided to start a publication called Halifax Retro. We wanted to document our environmental learning curve, and hoped people would contribute and want to learn with us. We published a few physical editions before we realized that there was a more environmentally conducive way to reach people, which of course, would be the internet.

The development of our environmental project, Halifax Retro, influenced and subsequently altered how we viewed the world around us. We drew inspiration from a time when the natural world was cherished rather than exploited; a time when Aboriginal people had a lasting relationship with Mother Nature before Europeans thought they could own her…and them. It evoked a strong need for us to experience a closer bond with not only nature itself, but to learn from those who were already living as soundly with nature as possible, and enjoying the fruits of doing so. 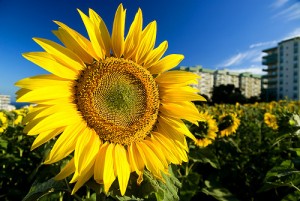 A few months into our Halifax Retro endeavour, we decided that the best way to fulfil these new goals without severely up heaving our entire lives would be to step away from our full-time jobs as minions to the corporate world (even if we were going back eventually), and volunteer through a notable organization called WWOOF (WorldWide Opportunities on Organic Farms). This would allow us to live directly on an organic farm, with the owners and other “wwoofers” alike, learning from the ground up how to do everything one would need to live a completely sustainable lifestyle. And what better place to do it in than in one of the world’s leading centres in the race to creating a sustainable world – Europe.

And so it began, and we’re now leaving in less than two months. We are going to live on organic farms for around three weeks in each Greece and Norway and perhaps the Netherlands as well (and have some fun along the way over the three months we’ll be gone). We also hope to write articles about different sustainable actions being taken in some of the countries over there, for we will be visiting a lot of them, and document our travels via our website.

From deciding which vegetables to plant, plus how to harvest, preserve, and share with the local communities they serve (most sell at their local farmers’ markets), we are hoping to build a foundation in our journey toward building something similar back home. By volunteering, we’ll learn everything about running an organic farm, while attaining valuable life lessons we couldn’t get by working a nine to five desk job.

We’ve become so displaced from the reality of our existence on the planet that in this day and age we truly believe that we have control over nature, the resources it emits, and the future in general. With all of the ecological changes we’ve seen in the past decade and the seemingly ensuing natural disasters like the recent Italian earthquake, Hurricane Katrina, the Tsunami of Indonesia, or even Hurricane Juan here in Halifax, it’s important for us to have a more hands on approach when it comes to food production, and to respect the earth while we do so.

By becoming more local in our ways, we rely on transportation less (and utilize less fuel), enrich our local workforce so we are supporting our local economy (and thus empowering small local businesses), and have an actual line of sight on what is going into our food, water, animals, land, etc.

After all is said and done, and we have completed our volunteering process in Europe, we hope to open our own barnyard doors up to future Wwoofers who wish to learn more about sustainability and the benefits of organic agriculture. After all, it’s in the Wwoofers moral code to keep the learning cycle alive to ensure progress – an unwritten rule, if you will.

Adam Costello graduated from Saint Mary’s University with a double major in philosophy and English. An editor of the Saint Mary’s student newspaper, The Journal, for three years, he currently does freelance writing for several different publications and freelance publishing for a number of businesses.