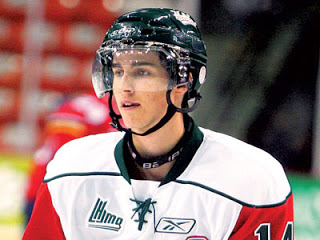 Moose blow two leads but steal a win in a shootout
After blowing a one goal lead and a two goal lead late in the third the Halifax Mooseheads had no business taking the PEI Rockets to a shootout last night.
With the game on the line in the shootout, Gabriel Desjardins dangled and picked up the Mooseheads second win in a row. Peter Delmas stood tall throughout and stopped all four Rocket shooters to backstop the team to his fifth win out of nine starts since joining the team at the trade deadline.
The Mooseheads started off the right way, fresh off of a win over Cape Breton Saturday night, when top draft pick Brent Andrews hit the back of the net. Like most of this season the young Mooseheads blew a lead and it was tied 1 – 1 heading into the second period.
Sawyer Hannay tried to get the team pumped up early in the second period but instead lost his second fight in as many games. The Moose tough guy hasn`t had much luck dropping the gloves since picking up the slack left by the departure of Spencer Metcalfe back in January.
Linden Bahm proved an unlikely hero putting the Mooseheads up 3 – 1 heading into the third period.
Once again the Mooseheads couldn`t hold on and in just twenty seconds, after two dreadful defensive plays the Rockets levelled it at three a piece heading into the third period.
Rookie defencemen Garrett Clarke found himself the odd one out as he was a healthy scratch, after also being benched for part of Saturday night`s game. Clarke`s undisciplined play has hurt the Mooseheads of late and hopefully this will help encourage the young player to stay out of the penalty box.
Announced attendance was just 4,559.
Captain Tomas Knotek also continued his strong play with two goals, but the big story was that of Gabriel Desjardins, who scored the shootout winner. The young, speedy winger had been under a lot of pressure the first half of the season and unable to find his scoring touch, but has been on fire the second half of the season and is finally showing the skills that grabbed him the rookie of the year award last season.
Three Stars
3rd – Konrad Abeltshauser – Not sure how the big German defencemen made it into the three stars, he was a minus one on the night.
2nd – Jordan Escott – Picked up two goals for the Rockets.
1st – Tomas Knotek – The Moosehead captain continued his strong play of late and had two goals in the game.