Halifax Stanfield Proudly Serves More Than Four Million Passengers for Third Consecutive Year
Halifax Stanfield, Atlantic Canada’s largest airport, continues to
demonstrate its key role as one of the region’s most critical pieces of
transportation infrastructure, serving more than four million passengers for the third consecutive year.
“Halifax Stanfield continues to be an important Eastern Canadian hub and
we’re well-positioned for future growth,” said Joyce Carter, President and CEO,
Halifax International Airport Authority. “Last year, we welcomed additional non-
stop services to a record four new destinations. These flights played a key role in helping us surpass our four million milestone again, and we appreciate the continued confidence our airline partners have in us by introducing these new services.”

An exciting area of growth was U.S. air travel, primarily as a result of new services added to Chicago (United Airlines) and Philadelphia (American Airlines), and increased capacity by both airlines to New York. Total U.S. air travel grew by 19 per cent compared to 2018 – a trend that’s set to continue in 2020.

“We were very pleased to see more options for non-stop travel to and from the United States introduced at Halifax Stanfield last year,” said Kevin Skillin, U.S.  Consul General in Halifax. “Utilizing non-stop routes and pre-clearing U.S.
customs in Halifax makes travelling to the United States easier than ever. I
encourage the community to take advantage of the option to pre-clear U.S.
customs at Halifax Stanfield, so they can continue their journey quickly and
easily upon arrival at their U.S. destinations.”

Global passenger traffic in 2019 was affected by the grounding of the Boeing
737 MAX aircraft, an unexpected industry event that has impacted airports and  airlines around the world, including Halifax Stanfield, which saw a three percent reduction in overall passenger traffic from 2018. This was in large part due to the temporary suspension and reduced capacity of several international routes,
and their corresponding feeder flights to and from other parts of Canada.

“We continue to work closely with our airline partners and expect services to
return to Halifax once the aircraft has been recertified for operation,” said
Carter. “We’re also working with local, national and international tourism
agencies to promote the Atlantic Region, as well as the many destinations
passengers can reach from Halifax. In 2020, service to all U.S. destinations, and
most European destinations, will continue, with the addition of WestJet’s recently announced non-stop service to Manchester, U.K.”
Last year, Halifax Stanfield was served by 17 scheduled and charter passenger
airlines flying to 46 destinations. The airport served an average of 11,500
passengers each day to various points within Canada, the United States,
Europe, Mexico and the Caribbean.
Passenger Statistics Summary: 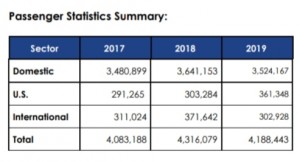