Up until a couple of weeks ago, I had never had a Reuben sandwich.  Several people were shocked about this fact, but I didn't really see it as a big deal.  I'm actually not all that much of a sandwich gal.  I like the occasional Bahn Mi or a little hot turkey action over the holidays, but most of the time, I could take it or leave it.

And then…I went to the Henry House. I've been a few times before and on this particular occasion, for some random reason, my psyche was jonesin' for some the smoked meat. As far as my research goes, the HH has a pretty standard edition: (marbled) rye bread topped with sweet Thousand Island dressing, tangy sauerkraut, nutty Swiss cheese and a pile – I mean pile, of smoked meat.

Well…I'll have that again. I tried to do the noble thing and save half for later, but failed miserably.  The slight heat from the meat's seasoning mixed with the subtle flavor of the Swiss cheese is a flavour combo that I'm sure to crave again.  Not to mention the yummy, crispy, skin-on fries that filled out the plate. 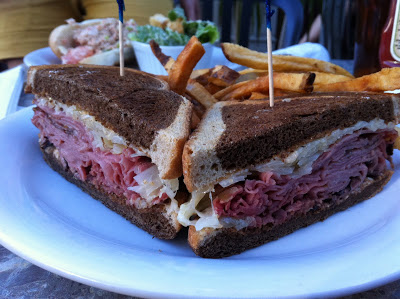 My pal's lobster roll was huge!  With big 'ol chunks of lobster, including a full claw, the mayo-based dressing was light and didn't overpower the lobster's delicate flavour.  Paired with a tasty Caesar, she was a pretty happy gal.
Lobster Roll w/ Caesar Salad 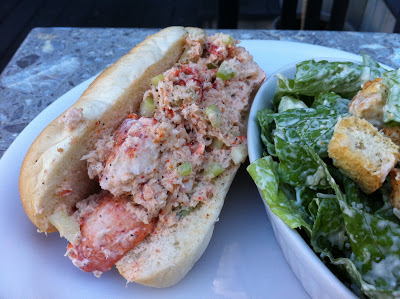 With our bellies full, we finished off our pints on the patio.  If you're in the South end of Halifax, the Henry House has a great patio on which to spend a sunny afternoon.  And it's not bad in the winter either!