I was grieving and I didn’t have time for everyone’s sensationalized grief.

I spent much of September 11th behind the wheel of a car, driving from the province where I had ventured the day before to say my goodbyes, back home to my husband and son. I was thankful that driving prevented me from my usual Twitter and Facebook checks through my Blackberry. My eyes were forced towards the road. I turned on the radio.

I was once more inundated with 9/11 anniversary coverage.

Knowing that without something conversational to listen to, my mind would quickly wander and my eyelids would soon droop. I needed to listen to stay awake and stay alert.

So I listened. And September 11th – the 9/11 event that everyone was celebrating and mourning and remembering – took on new meaning to me.

There were stories. First, one person’s story. Then another. And another. The event was slowly drifting from a place of general sensationalism to the narrative of individual lives. She was a child in a school blocks away. He was one who jumped from the windows. A mother. A father. How they are changing things now. Stories.

I was asked to write down a little something about my grandmother for today’s funeral. I wasn’t sure if I knew how to do that. I didn’t know how to give just a simple memory and make it mean something. My Grammy is deserving of a story.

Grammy is teacups and aprons and freshly baked food. She is sweets and adventure and family.

When I think about Grammy, my mind is immediately drawn to food. I don’t mean that to sound crass. Food in the context of my grandmother was never just about tasting and chewing and digesting. Food was Grammy’s art. It was how she spread love, how she drew people together.

Grammy didn’t just have a cookie jar. She had a cookie cupboard. And we grandchildren always knew where it was. You could usually expect some staples – thumbprint cookies especially – but there was always plenty of variety. We didn’t just eat cookies around Grammy. We baked. My sisters and I used to spend our Thursdays with Grammy and Grampy.  Most of those Thursdays involved two little girls, standing on chairs, stirring something bubbly and sweet in a pot with our Grammy. (I am pretty sure those were the only times that I ever made anything half decent in a kitchen.)

Grammy didn’t only help us stir the pot and spoon the cookies onto the sheet. She plated the food and brought it to the table. And that is where her art turned into magic. Going to Grammy and Grampy’s house usually meant joining together with family; our big, crazy, wonderful family. It wasn’t necessarily the food that brought us there, but it was around the food that we gathered. It was in the preparation and the full mouths and the stuffed bellies and the cleaning up that we came together and shared our stories.

That was my Grammy. It isn’t all of her. It isn’t even a majority of her. But it is one of her stories. It is the story through which I am remembering her. 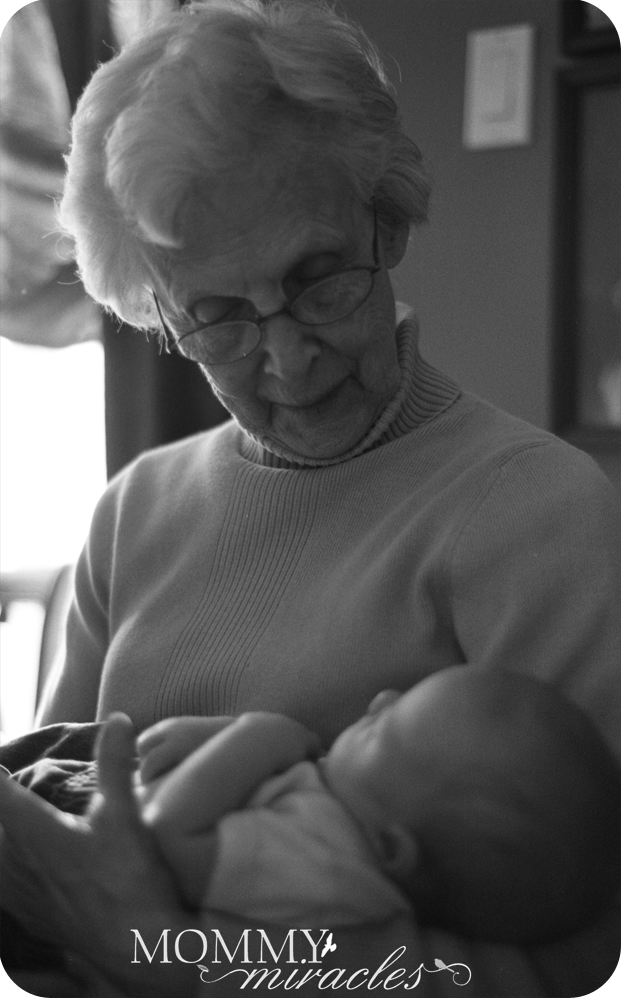 Grammy and Cameron, her newborn great-grandson

Please go read this, from my Mother on losing her Mother. My Mom is an incredible writer and you won’t at all be disappointed you entered into her world for a moment.