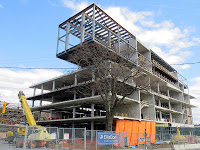 Each day as I walk to work I pass by the site of the new Halifax Central Library.  I get to see the building change a little every day.

I love watching the construction workers and their machines doing their things so high up in the sky.

I’ve also noticed that I am not alone in this fascination.  At any given time, there are usually a bunch people just standing around watching the construction. I guess skyscrapers are of interest to a lot of people. Perhaps you too?

Here are a few non-fiction reading suggestions pertaining to skyscrapers and to the men and women who create them: 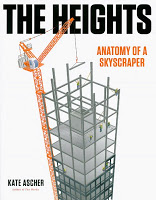 The Heights : anatomy of a skyscraper (M)
by Kate Ascher

A graphic tour through the inner workings of modern skyscrapers explains how they operate and how sophisticated networks of technologies and utilities are possible within their complex structures.

Art of the Skyscraper : the genius of Fazlur Khan (M)
by Mir. M. Ali.

“Fazlur Rahman Khan was born in Bangladesh in 1929 and immigrated to the United States in 1950. His innovative approach to tall building design and attention to esthetic detail earned him the reputation as the “Einstein of Structural Engineering”. A Partner and Chief Structural Engineer of the world-renowned firm of Skidmore, Owens & Merrill, Khan developed the bundled-tube configuration, a revolutionary concept in tall building structure that virtually redefined the limits of the skyscraper.

The Art of the Skyscraper is the first serious study of Khan’s work and life¾from the 1950s when he studied at the University of Illinois, to the 1970s when the world watched as his phenomenal designs for the John Hancock Center and Sears Tower rose out of the Chicago skyline, to the 1980s when his engineering principles began to change urban skylines everywhere, with buildings that include the Bank of China Building in Hong Kong and the Petronas Towers in Kuala Lumpur, Malaysia, today’s world’s tallest building. With illustrations and detailed drawings, this intriguing monograph is an invaluable resource for students, architects, engineers and readers interested in skyscrapers.” – Publisher 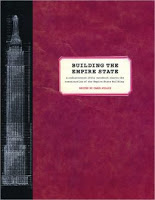 “A rediscovered 1930s notebook charts the construction of the Empire State Building. The construction of the Empire State Building was orchestrated by general contractors Starrett Brothers and Eken, premier “skyline builders” of the 1920s. They scheduled the delivery of materials and the construction and recorded daily the number of workers by trade. Compiled from these records, an in-house notebook documented the construction process. Meticulously typed on graph paper and illustrated with construction photographs, this unique document combines a professional specificity of detail with a charming rhapsody to the firm’s crowning achievement.Constructed in eleven months, the 1250-foot Empire State Building, the world’s tallest skyscraper from 1931 to 1971, was a marvel of modern engineering. The frame rose more than a story a day; no comparable building since has matched that rate of ascent.” – Publisher