On a sunny weekend last fall, I hiked Cape Split with a bunch of girlfriends. We laughed a lot.

Since it was:
1. October
2. We were in Wolfville
3. It was Saturday

…The stars were aligned to pop into Farmers Market to stock up on fuel for the hike. Speaking of fuel, we needed that too for the 35-40 minute drive to Scotts Bay from Wolfville. A group photo was taken at The Blomidon Look Off – where on a clear day like ours, you can see five counties in Nova Scotia and Cape Blomidon and the New Minas Basin. 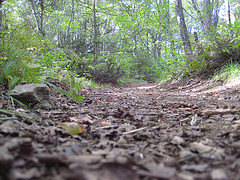 With “Rocky”, a part boxer and German haired pointer mix dog as our guide, we set off for the 16 km hike. The trail was a mixed bag of a few bumpy places, one fallen tree to climb over, swampy patches but mostly good terrain. The terrain didn’t bother 10 year old Rocky at all.

Conversation and laughter filled the woods as we ventured along, passing hikers on their way from the trail head. About an hour later we started asking every hiker that approached us from the opposite direction with “how much further?” It wasn’t like we were bored, we were excited to reach the stunning view ahead (okay, and eat lunch). After about 90 minutes of hiking, we reached the large open area of field and steep cliffs below. We sat and ate our lunches on the west side
slope. 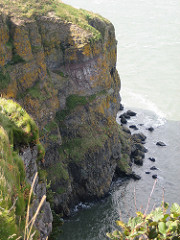 Dozens of pictures of the cliffs and Bay of Fundy and watching Rocky dig a hole to China later, we reluctantly decided to hike back and leave our scenic reward behind. Only 90 minutes (or so) back to our cars and dinner at a trendy gastro pub.

If you are hiking Cape Split, we very careful to stick to the main trail. Read the sign at the entrance of the trail very carefully! We were reminded of this when we met four Acadia students who took a misleading trail from the trail head. They said our laughter helped re-orient them back to the original trail, when they met up with us we provided them with tasty treats to sustain them for the hike back to their vehicle.

So in one afternoon, we hiked Cape Split and then had dinner in Wolfville. Not at the gastro pub but a popular place on Main Street. The drive back to Halifax was quiet, our muscles were aching. Not so much from the hike but from laughing so much. 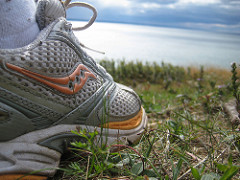