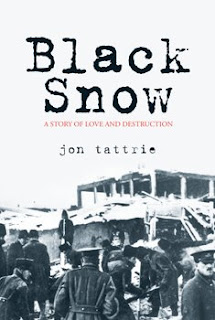 I recently had two readers express a strong preference for historical fiction.

When asked what it was that appealed to them about historical fiction, they each revealed that they love to read stories based on significant historical events and that having a story woven around the facts allowed them to better understand the human emotions and motivations surrounding the historical event. The readers felt that their reading experience was so much richer than would be the case from reading non-fiction.
A wonderful recent example of this literary approach comes from a local author Jon Tattrie, who has just released Black Snow: a story of love and destruction.   While many of us are familiar with the details of the Halifax Explosion from various history books, the mindset of the survivors is near impossible to convey just with the facts and statistics.
Jon’s novels tackles this psychological aspect of the Halifax Explosion. The story draws the reader into the thoughts and emotions of the survivors, as told through the voice of fictional character Tommy Joyce, who must search through the devastation to find his true love. (btw, Jon will be reading at the Keshen Goodman Library on June 10th)
I have to say that these readers make a convincing case for me to try some historical fiction.
I asked a few fans of this sub-genre of historical fiction to provide me with a few reading suggestions:

Pillars of the Earth, by Ken Follett
A story of passion and idealism, which describes a group of men and women in the Middle Ages whose destinies are fatefully linked with the building of a cathedral.In a country torn by civil war, two generations struggle to rise above their primitive circumstances and create something beautiful. — Publisher

A Respectable Trade, by Philippa Gregory
“This moral spellbinder, set in Bristol, England, in the slave-trading 1780s…the book brilliantly shocks the conscience with its intimate and unsparing portrait of slavery. It’s a romance, but not a sentimental one, built around the impossible love between white slave owner Frances Scott Cole and the black African Mehuru”
—Publishers Weekly

Suite Francais, by Irene Nemirovsky
“Suite Francaise chronicles life in France during the World War II Nazi invasion and occupation. Intended to be told in five parts, only the first two were completed before the author’s death. The novel has been praised as a window into the lives of everyday people living through tumultuous times, and as a sensitive depiction of a major historical event. “An extraordinary novel of life under Nazi occupation – recently discovered and published 64 years after the author’s death in Auschwitz.””–Publisher

When Christ and His Saints Slept, By SharonKay Penman
“Set in 12th-century England and the early civil war between Stephen and his cousin, the Empress Maude, this story tells of a long fight to win the English throne. Stephen was handsome and unreliable; Maude was courageous, beautiful and arrogant. They fought for twenty years and devasted England.”–Publisher