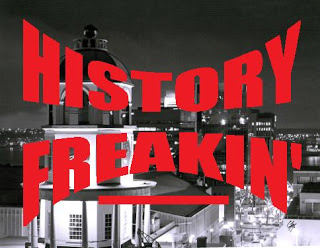 In the last post I detailed the nefarious scheme our neighbour to the south once cooked up in the unlikely event of a full scale war between our two nations, and our Commonwealth allies. It was a work of sheer malevolent brilliance which included the blockade of the Pacific coast, air raids against Ontario and most monstrous of all the carpet bombing and gassing of Halifax as a prelude to an all out assault. Within its pages the United States had scripted our proud nation’s doom. What the Americans weren’t aware of however was that they weren’t the only ones scheming and devising contingencies for imaginary wars. Often we Canadians are accused of being overly coy, passive aggressive and far to hesitant to get “stuck in”. This is of course utter bullshit, fully disproven by the fact that we joined the two World Wars years before the Yanks and were totally willing to militarily commit to Korea, Afghanistan, innumerable peacekeeping missions and the Cold War defence of both North America and Western Europe. The fact that a famed Canadian military officer had conjured up a plan to invade the United States nine years before the Americans created War Plan Red only adds more evidence to the contrary.

Oh you didn’t know about that last one? That’s right, in this rare instance it was we Canadians who were the shadowy Machiavellians, plotting in secret the defence of our realm and her interests. Called Defence Scheme 1, it was a strategy whose existence owes much to the lingering memory of the War of 1812. Ever since Isaac Brock pushed back an American army at the Battle of Queenston Heights, the threat of an invasion had haunted our collective psyche. Though highly unlikely many Canadians in their heart of hearts still believed that the Americans may one day complete what their economic, political and cultural enterprises started. It would be fair to say that this gut feeling has not totally disappeared, even today in an age where Canada and the USA are often perceived as the most inseparable of allies (also not without a basis in reality). So it should come as no surprise that even as late as 1921, the Canadian government still maintained a strategy of effective defence in the event that the American ideology of manifest destiny once again took on a militaristic bent. By the 1930s their foresight and paranoia would be partly justified.
But unlike War Plan Red, DS1 was not some part of a grand pseudo-imperial chess game, rather it was a practical solution to the threat of a largely unmatchable foe. The planners, led by Canadian First World War hero James Sutherland “Buster” Brown, were well aware that a total invasion of United States was physically impossible and that a successful independent defence of the vastly less populated Canada was highly unlikely. At least not without heavy losses and a long period of irregular warfare in the hinterland. Instead our answer to the American threat, Defence Scheme 1, was elegant in its simplicity: during the buildup to an imminent attack against Canada and the Commonwealth (probably precipitated by the same type of imperial rivalry outlined in War Plan Red), Canadian forces would unleash an all out surprise assault across the border. After reaching as far South as possible and quickly capturing several major American cities within striking distance of Canada, the military would then retreat in advance of the American counter-attack. As they departed however they would quickly destroy railroads, bridges and any other form of infrastructure, industry or logistical assets they could attend to in a timely fashion. With a crippled industrial heartland and all easy access into Canada destroyed, the Canadian military would then dig in along the 49th parallel and wait for the inevitable Commonwealth and British reinforcements to arrive in order to ensure the defence of the country. From that point on an advance into American territory would have likely ensued but that is only speculation on my part and not detailed by the plan. What makes this little piece of history even more incredible is that the planner actual did some practical ground work in order to ensure DS1’s success in the unlikely event it was ever employed. Despite having only a paltry $1200 annual operating budget James S. Brown himself managed to do some physical reconnaissance of the target areas. He drove across the border, collected maps, took pictures and assessed the best places to strike and what infrastructure needed to be destroyed.

It would also seem that the Canadian government’s paranoia was somewhat justified as not only did the Americans eventually develop War Plan Red but in 1935 several generals applied for Congressional funding in front of the House Armed Services Committee for the construction of three airbases to be built near the border and disguised as civilian airports. They were to be the physical foundation of the still hypothetical Plan Red and serve as launching points for deep strike missions into Canadian territory. Unfortunately a clerical mix-up meant that the events of this supposedly closed-door meeting were accidentally published and made readily available to the public. Canadian officials quickly picked up on this extraordinary tidbit and the Government raised holy hell. Then President Franklin Roosevelt quickly denied that any offensive was being planned but the fact the US military carried out a massive series of war games just across the Canadian border didn’t help assuage any fears. Eventually the whole incident culminated in a newspaper article which made the front page of the New York Times in May of 1935. That seemed to spell the end of this “secret” American plan. So to those of you not celebrating this July 1st, remember. No matter how peaceful we seem, no matter how close to you Americans it appears we are, our complacency is but a mask. A cover to hide our true intentions. So go ahead and turn eyes elsewhere. Chase tin pots and terrorists all across the globe to your heart’s content. The more distracted you are the better, because before you know what hit you….we’ll be celebrating Canada Day in Boston. Happy Canada Day everybody!

History Freakin': Death From Above The 49th
https://haligonia.ca/history-freakin-death-from-above-the-49th-3294/