This post comes to us from Sadie Beaton at Small Scales blog, and originally featured in Rustik Magazine.

Growing up in the fishing community of Canso, Nova Scotia, my school bus driver’s favourite expletive was “Holy Jumping Mackerel Fish!” I would love to believe it was meant as a tribute to my favourite fish.

(But it was mostly because Corey Bond wouldn’t stay in his seat.) 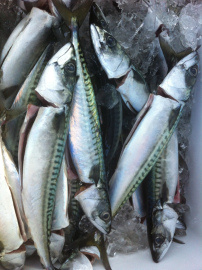 Mackerel is a dusky, gorgeously striped little fish. Open-ocean schoolers, they follow the warm water up the Atlantic coast every spring, gathering in protected coves to feed on copepods and other little critters. Once fall sets in, they disappear into deeper waters – though scientists seem unsure of exactly where.

Like fiddleheads and hodgepodge, the appearance of mackerel along Nova Scotia’s coast is a sign that spring has actually sprung, that summer is on its way. Their arrival causes waves of excitement for anglers and wharf-rat kids like me who wait for the “nervous water,” a subtle choppiness that means they’re on their way.

“The mackerel are running,” someone will say, and soon local wharves and breakwaters are populated with ballcaps, jigs, rods and coolers.

With a bit of vertical jiggery, mackerel are an easy catch. Just wiggle a jig on a bit of fishing line and something shiny- tinfoil used to work for me- over the edge of the wharf, and you’ve filled your cooler- or your schoolbag- in no time. You don’t even need a license.

Early settlers likely learned to anticipate the mackerel run from First Nations communities, who used gillnets and beach seines to gather them up. Today, inshore fishermen use a variety of methods to catch mackerel from jigging, to gillnets, handlines, and traps. A small seine fishery also operates off Cape Breton’s coast. 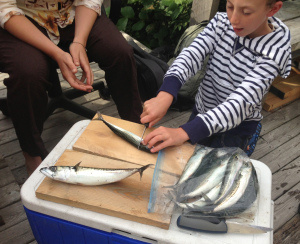 These days, precious little commercially caught mackerel is enjoyed locally. While some is destined to become fishing bait for lobsters and other species, most of the rest is exported to China, Russia and Eastern Europe. U.S. exports are also consistent, where incidentally, “stack of macks”- a.k.a. mackerel packets- replaced packs of smokes as the black market federal prison currency back in 2004.

Every summer, I am surprised by the lack of mackerel at local farmer’s markets, restaurants and even grocery stores. Unless you can find the elusive neighbourhood mackerel truck- or catch it yourself, it can be hard to find. Meanwhile, some of the freshest morsels available are buried in vegetable gardens as fertilizer or thrown about in the summer festival sport of “Mackerel Toss.” 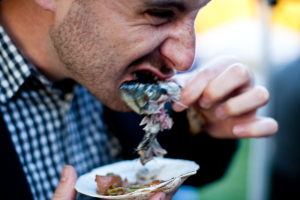 Not only are Mackerel resilient and sustainably caught, they’re full of protein and healthy omega-3 oils, and delicious when drizzled with a little lemon juice and grilled on the barbecue. Also, if you ask me, hot-smoked mackerel is one of life’s more exquisite pleasures.

Etymology aside, it is high time we expressed some reverence for the Holy Mackerel. Atlantic Canada is home to some of the best quality sustainable seafood in the world, and for the most part, we don’t celebrate it nearly enough. Let us praise.

Fresh mackerel is a bright, shimmering sign of summer. Whether you catch it yourself or chase down your local mackerel truck- we should be celebrating it alongside our fresh new potatoes and sugar snap peas. Enjoy it with a nice cold glass of Tidal Bay (Nova Scotia’s very first appellation) or L’Acadie Blanc… or whatever sacrament you prefer.